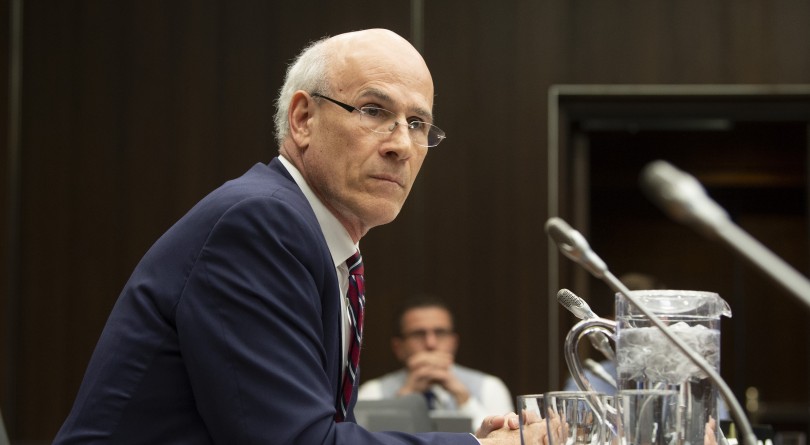 Clerk of the Privy Council Michael Wernick waits to appear before the Justice Committee meeting in Ottawa on Thursday, Feb. 21, 2019. (THE CANADIAN PRESS/Adrian Wyld)

In extraordinary testimony to a parliamentary committee today, Michael Wernick, Canada’s most powerful bureaucrat, set out a vision of the country that contrasted his dark forebodings about reckless discourse drifting toward political violence, against his blanket reassurances that the government itself, especially in its reverence for the rule of law, is all but beyond reproach.

As Clerk of the Privy Council, Wernick heads the federal public service and acts as the Prime Minister’s deputy minister. He joined Ottawa’s bureaucracy in 1981, and reached its pinnacle post in 2016. Wernick was called to testify before the House justice committee as it delves into whether Liberal MP Jody Wilson-Raybould was improperly pressured last fall, when she was justice minister and attorney general, to give the Montréal engineering firm SNC-Lavalin a chance to avoid a damaging bribery trial.

Rather than sticking closely to the Wilson-Raybould controversy, however, Wernick offered the sort of sweeping, personal perspective that mandarins at his lofty level rarely voice publicly. “I worry about foreign interference in the upcoming election, and we’re working hard on that. I worry about the rising tides of incitements to violence, when people use terms like treason and traitor in open discourse. Those are the words that lead to assassination. I’m worried that somebody is going to be shot in this country this year, during the federal campaign,” he said in his opening statement.

READ MORE: Who is on Team Wilson-Raybould?

Still, the committee called Wernick, not for his unexpectedly ominous worldview, but for insider answers on how hard Wilson-Raybould was pressured to override the federal prosecution service to give SNC-Lavalin a chance to negotiate what’s called a “remediation agreement” instead of going to trial. She refused to do that last fall. Early this year, Trudeau demoted her to Veterans Affairs from the more prestigious Justice portfolio. She later quit cabinet altogether, and is slated to testify about it all to the justice committee next week.

Prime Minister Justin Trudeau’s principal secretary, Gerald Butts, resigned earlier this week over allegations in news reports that the Prime Minister’s Office leaned too hard on Wilson-Raybould, and then moved her out of the way when she wouldn’t bend. Butts strongly denies he—or anyone at the PMO—did anything wrong. His exit raised the stakes dramatically in a saga that is gripping Ottawa, and guaranteed a tense atmosphere surrounding Wernick’s committee appearance.

Wernick said Wilson-Raybould’s independence as attorney general was always respected.  “There was no inappropriate pressure put on the minister at any time,” he asserted. On the Trudeau government’s way of operating, he added, more broadly, “You may not like their politics or their policies or their Tweets, but they have always been guided by trying to do the right thing, in their own view, in the right way.”

He framed this uproar in the context of a world in which Canadians might start to fear that public figures can’t be trusted and institutions are being undermined. “I worry about the reputations of honourable people who have served their country being besmirched and dragged through the market square,” Wernick said. “Most of all I worry about the people losing faith in the institutions of governance in this country, and that’s why these proceedings are so important.”

He alluded pointedly to the precarious condition of American politics, although he didn’t mention President Donald Trump by name. Wernick seems to be afraid that Canadians bombarded by news of investigations into Trump might be susceptible to believing Canada’s justice system is also under siege. “Anybody who is following American politics these days, if you can stand it, will be seeing vigorous debates about the role of prosecutors, grand juries, law enforcement agencies, and so on,” he said.

Then Wernick made the link to how Canadians might process news of Wilson-Raybould and SNC-Lavalin. “I think Canadians need to be assured,” he said, “that their police and investigators with the powers of the state operate independently, and that the prosecution services—the state charging people with offences—are completely independent.”

He stressed repeatedly that even though SNC-Lavalin had aggressively lobbied the federal government, the company never did manage to get the remediation agreement it so badly wanted. Wernick was eager to put on the record the fact that he personally refused to meet with the company more often than he agreed, and even walked out of a National Arts Centre gala last Oct. 3—an event headlined by pop singer Diana Ross—to avoid proximity to SNC-Lavalin executives.

READ MORE: SNC-Lavalin’s allies in its push to avoid prosecution

It was a glimpse inside the way the powerful interact—and evidently sometimes don’t—around Ottawa. That culture can seem opaque to outsiders. Yet Wernick said the Wilson-Raybould affair could be cleared up quite easily, and without the formal judicial inquiry some opposition MPs are urging. He said the investigation already launched by the federal ethics commissioner is sufficient. The question: Were his own conversations with Wilson-Raybould, and her interactions with Butts and Trudeau, the sort of consultations with an attorney general that are allowed, or did those discussions intensify into the kind of pressure that’s not permitted?

“This is a relatively simple matter in its essence,” Wernick said. “If you strip away all of the hyperbole and the rhetoric, it’s about whether a minister felt inappropriate pressure. And that can be traced to specific conversations and meetings, and I think the ethics commissioner could get to the bottom of this fairly quickly.”