At the First Ministers summit, the meeting was the message 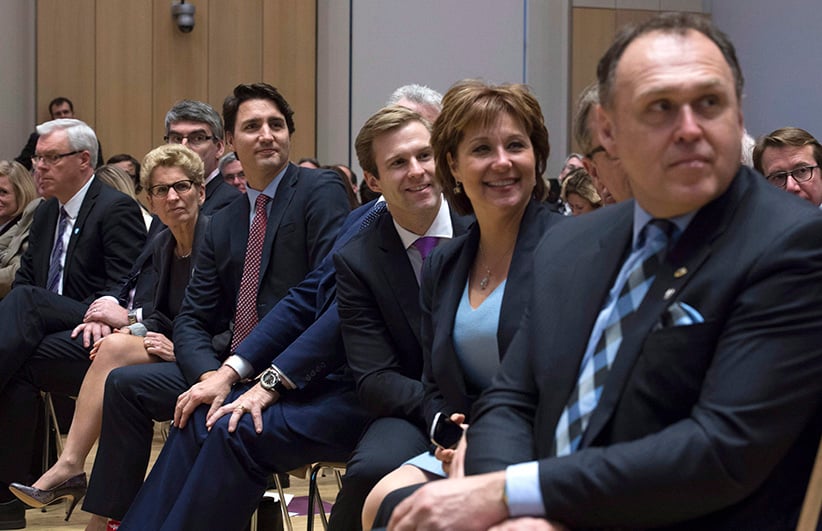 They were never meant to come up with a definitive plan to tackle climate change, and they didn’t. But in the case of a new government, three weeks after its swearing-in, the meeting itself may have been the message.

Prime Minister Justin Trudeau and all of Canada’s provincial and territorial leaders spent a few hours Monday preparing for the UN climate talks in Paris, which kick off next Monday. They started with a climate science briefing before going behind closed doors for dinner and discussion. They emerged to say they are excited about working further with each other.

“It is clear that the way forward for Canada will be in a solution that resembles Canada: that is shared values and shared desire for outcomes, and different approaches to achieve those outcomes right across this great country,” Trudeau said.

All that Trudeau sought from Monday’s meeting, he said 10 days ago, was to discuss the “strong and cohesive message” Canada will deliver in Paris. On that count, they are in the same place they were prior to the meeting: with Saskatchewan Premier Brad Wall, whose province is the highest per capita emitter in Confederation, the lone reluctant voice.

Related: Amid a climate-change parade, Brad Wall casts himself as Harper Lite

That’s likely just fine by the Liberals, since the meeting itself was a way to reiterate the message that the new government — the one run by the “real change” party — is going to do things very differently from the old one. For one, this prime minister (so far) wants to improve the relationship between the federal, provincial and territorial governments. He not only gathered the first ministers, he invited them along to the Paris climate talks and promises a follow-up meeting within 90 days.

Monday’s meeting itself was full of signifiers: Trudeau and the premiers gathered at the Museum of Nature to talk about the environment, and began with a briefing from two federal scientists which was live-streamed on Environment Canada’s website for anyone who wanted a refresher on basic climate science. The scientists, seated between an official from Environment Minister Catherine McKenna’s office and one of the most senior civil servants in the department, also took reporters’ questions. This was an example of the Liberal promise to return to past practice by letting government officials speak about their areas of expertise.

On Sunday, Trudeau and the premiers will arrive in Paris for the global climate talks, armed only with the previous Conservative government’s targets for cutting Canadian greenhouse gas emissions. Canada has recently been a bit of a pariah when it comes to environmental conferences. But the Liberals also promise to come up with a plan to actually curb emissions, which in itself will be more than the last two governments managed.

On this, the premiers have done a lot of the work for the federal government, a point Trudeau acknowledges when explaining there will be different provincial plans to achieve the targets. Alberta on Sunday announced it is extending its carbon levy to a full cross-economy carbon tax, starting at $20 per tonne in 2017 and increasing to $30 per tonne in 2018, plus capping oilsands emissions and accelerating the phase-out of coal-fired power plants. British Columbia already has a $30 per tonne carbon tax, while Quebec uses cap-and-trade, and Ontario is set to follow suit.

Those plans cover about 70 per cent of Canada’s population, but not Saskatchewan, where the mining and oil and gas sectors account for just over a fifth of Saskatchewan’s economy, and where Wall faces a spring election.

“There are literally tens of thousands of Canadians who have been laid off of their jobs in this [oil and gas] sector,” Wall said following the meeting. “We need to be mindful of that fact. We need to work hard to ensure that we’re doing no further harm to an industry that’s facing great difficulty.”

The Conservatives marked the meeting with a news release reminding reporters that the Canadian targets remain those set by Stephen Harper’s government. “We are pleased that the Liberal government has adopted the Conservative greenhouse gas emission reduction targets,” said Conservative environment critic Ed Fast. “At the same time, Canadians have a right to expect that any new national commitments taken in Paris are part of a larger global agreement that includes all major emitters, does not unfairly penalize Canada’s energy industry, and maintains our economic competitiveness.”

McKenna says the existing targets are the least Canada can do, suggesting the Liberal government aims to set tougher ones in future. Any further targets, as well as a national plan to get there, remain at least 90 days away. But as Trudeau prepares to deliver a cohesive message in Paris, as far as a domestic audience is concerned, the first ministers meeting did what it needed to.