Paul Wells: Earlier this year, Justin Trudeau gave his finance minister a mandate to avoid any new recurring spending. Here is a brief history of that doomed campaign. 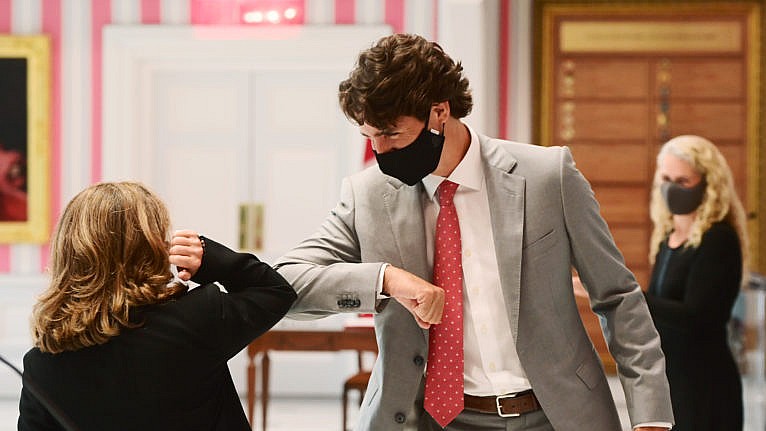 Freeland elbow bumps Trudeau after being sworn in as finance minister following a cabinet shuffle at Rideau Hall in Ottawa on Aug. 18, 2020 (CP/Sean Kilpatrick)

On Jan. 15, five months after she became finance minister, Chrystia Freeland received a mandate letter from Prime Minister Justin Trudeau. It told her to “use whatever fiscal firepower is needed in the short term to support people and businesses during the pandemic.” But there was an important, and seemingly categorical, limit on this order: “Doing so, you will avoid creating new permanent spending.”

The distinction was clear, and as I’ll demonstrate, the government had been preparing the ground for it for some time before this letter became public: Spend “whatever… is needed” but only in the “short term.” Recurring spending—like a new transfer payment to the provinces that they would reasonably expect every year—“will” be avoided.

On Feb. 10, Trudeau announced “the creation of a permanent public transit fund of $3 billion per year.”

Twenty-six days separated the announcement of a rule against new permanent spending and the announcement of new permanent spending. I’m not sure whether this establishes a new record for brevity in self-contradiction, but it’s certainly admirable in its clarity. Don’t start a permanent new program. I will now start a permanent new program. Since the subjects involved include federal spending; management of the economy (the government advertises its transit fund as a measure to “support economic recovery”); long-term planning; federal-provincial relations; and the value of the prime minister’s word, I’m not sure the contradiction is trivial.

By last September it was becoming obvious this pandemic was going to last a while, and that it had revealed structural flaws in government services that would need fixing. That meant the titanic spending governments had already undertaken (especially, and properly, the federal government, which had more fiscal room) wouldn’t simply melt away in a few months. There’d be a long-term cost. The provinces started to wonder who’d pay it.

Quebec’s premier François Legault noted that Trudeau had developed a fascination for the state of long-term care in Ontario and Quebec, where most of the COVID-19 deaths in Canada had happened. The Prime Minister was full of advice, and he justified his interest in provincially-delivered services by saying it took Canadian Armed Forces members visiting those care homes to sound the alarm about conditions in them.

Legault wondered whether the feds would be as eager to chip in financially for any solution. “What we’re lacking in the health-care system right now, and particularly in long-term care is personnel,” the Quebec premier said. “And personnel is a permanent cost, not just a cost this year. Mr. Trudeau helped us this year, but the 10,000 people we add in long-term care, who’ll help us pay for that next year?”

Legault was spelling out a longstanding rule of thumb in federalism: a federal interest in programs delivered by the provinces is normally only empty musing unless the feds are willing to share the cost burden. This argument has enough surface plausibility that by December, the feds needed to start explaining why they were spending more on just about everything except transfers to the provinces. It fell to Trudeau’s Quebec lieutenant, Pablo Rodriguez, to test-drive the new line.

“We’ve wound up with an enormous deficit,” Rodriguez told Le Devoir. But at least “it’s not structural. We have to keep that in mind because the message we send to the credit rating agencies, the Moody’s and Standard and Poor’s and so on, is that we’re getting through this crisis without recurring expenditures. But if we tell them we’re doing it with non-recurring spending and also with recurring spending, there’ll be a direct impact on our credit ratings. And that also affects the provinces.”

This was in effect an even stronger message than the one Trudeau had delivered to the provinces a few days earlier, during a virtual first-ministers meeting. Trudeau had insisted he wanted to talk about increasing transfers, just not right now. (The Prime Minister meets the premiers by Zoom most weeks over the past year, but plainly prefers that these meetings not be decision-making events.) Now Rodriguez was claiming a durable exogenous reason for resisting permanent spending: Moody’s would make us all pay if the feds gave in. And a month later, the rule had the force of a mandate-letter instruction from the PM to his indispensable lieutenant.

So the pressure to create permanent new spending came from the premiers, for health care. The feds’ resistance increased over time, from simple stalling to a newly-elaborated rule of budgeting, to a formal principle. Then it vanished—so Trudeau could spend on something besides health and long-term care.

I should note some important elements of this permanent transit fund. First, at $3 billion a year, it’s peanuts compared to the provincial health-care demands, which were in the neighbourhood of $18 billion in increased annual transfers. No conceivable federal government, of any party stripe, would have delivered new transfers on the scale the provinces wanted this year. But a government would have been free to pay any fraction of the provincial demand that it deemed more manageable. Unless it preferred to spend the money on something else.

Second, the new permanent transit fund is to take effect beginning in 2026-27. This introduces elements of absurdity I really don’t know what to do with. The Prime Minister was “announcing” something that will be delivered, not by his government, and not even by the one that will be elected in the next general election, but in all likelihood, by the government after that. And, if “permanent” has any meaning, by every government that follows it. The lines of democratic accountability in such a plan are… tenuous.

You say to me: Paul, you are making a huge fuss over very little. The feds want to avoid massive spending now; they plan for modest spending later. And that’s true. Except it ignores what’s between the “now” and the “later:” up to $100 billion over three years, already promised by Freeland in her fall update, for “stimulus” measures designed to build an innovative green economy. A large part of that $30-ish billion per year will certainly end up going toward public-transit projects. Most people have a term for temporary spending that is followed by permanent spending. Most people call that sort of thing “permanent spending that starts earlier.”

My favourite thing about this new transit fund, to be implemented by the government after the government after Trudeau’s, is that its details will have to be negotiated with the provinces. As Trudeau’s own announcement acknowledges. So the prime minister after the prime minister after Trudeau (who could well be Trudeau! As always, that’s up to you) will, as Trudeau imagines it, sit down with the premiers and say, “Now we will negotiate the use of the money I don’t want to give you for health care.”

That’ll go over well. Remember that Pablo Rodriguez says the government has to act this way because it’s important to convince Moody’s that it’s a serious government.