Beijing's man in Ottawa ratchets up his rhetoric

Politics Insider for Oct. 16: Cong Peiwu warns Canada against offering asylum to Hong Kong activists, Mi'kmaw fishers plead for help from the feds and sea otters are back with a vengeance 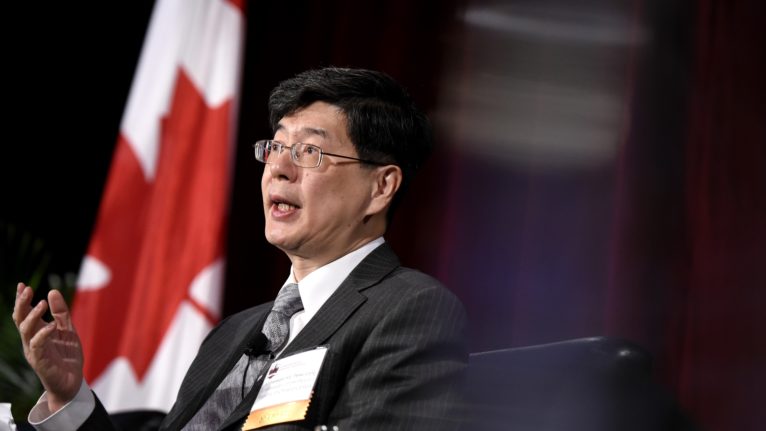 Ambassador of China to Canada Cong Peiwu speaks as part of a panel at the Ottawa Conference on Security and Defence in Ottawa, on Wednesday, March 4, 2020. (Justin Tang/CP)

It’s fair to say China has taken exception to Canadian efforts to grant asylum to political dissidents from Hong Kong. Beijing’s representative in Ottawa, Cong Peiwu, told a press conference that two recent refugees from the Chinese city were “violent criminals,” and constitutes interference in China’s domestic affairs.” Cong appeared to at least imply a threat. “If the Canadian side … really cares about the good health and safety of those 300,000 Canadian passport holders in Hong Kong and the large number of Canadian companies operating in Hong Kong,” he said, “you should support those efforts to fight violent crimes.”

Was Cong threatening repercussions? The Globe reported the ambassador as saying any perceived threat was the questioner’s “interpretation.” Cong also repeated longstanding—and, frankly, unbelievable—denials that Michael Kovrig and Michael Spavor’s detention was connected to Canada’s arrest of Meng Wanzhou, and he threatened a “strong reaction” if the House of Commons formally condemns China’s treatment of its Muslim Uyghur minority. (If anyone needs reminding: China has locked up hundreds of thousands of Chinese Muslims in what it describes as re-education camps but which the rest of the world considers a shocking, widespread abuse of human rights.)  Meanwhile, the Globe also investigated the influence of the Chinese-backed Confucius Institute on the curriculum of a school board in B.C.’s lower mainland.

An ‘assault’ on the Mi’kmaw: That’s how Indigenous Services Minister Marc Miller described recent violent acts perpetrated against Indigenous fishers in Nova Scotia (read more about the Mi’kmaw struggle). Miller called on the Mounties, who’ve been criticized for making no arrests in connection with a damaged facility and burnt-out van that belonged to Mi’kmaw fishers, to keep the peace. Miller set the stakes: “If we don’t get this right,” he said, “people will die.” Mike Sack, the chief of the Sipekne’katik First Nation, called on Ottawa to do more. “They’re sitting in their offices, safe as can be, saying, ‘We need safety out there.’ Then send enforcement down,” Sack told a press conference.

The feds have launched a national design competition for an LGTBQ+ monument in the nation’s capital that will eventually sit near the shore of the Ottawa River behind the Library and Archives Canada building. The total budget for the monument’s design and construction is set at “no less than $4,825,000.” One of the jury members is Michelle Douglas, an LGBT purge survivor who has championed the monument—and more recently made headlines for clashing with the Kielburgers.

Leslyn Lewis will officially take her talents to southwestern Ontario, where she’ll carry the Tory banner in the next election and attempt to prove her Haldimand-Norfolksiness to the locals. Lewis is from the GTA, but a majority of Haldimand-Norfolk Tories supported her on the second ballot before she was eliminated from the party leadership race.

American evangelicals still see Trump as their anointed one: As the race for the White House builds to its crescendo, Adnan R. Khan is touring rural America in search of answers to so many questions raised during a chaotic campaign. He stopped in Moscow, Idaho, to explore the unbridled enthusiasm among evangelicals for the incumbent.

The fervour for Trump—especially in rural Montana, Wyoming and Idaho—is of the cultish variety seen at Trump rallies.  Many progressives like me, understandably, dismiss it. But as W.I. Thomas, the late 19th- and early 20th-century American sociologist, once said, “something is real if it is real in its consequences.” And the consequences of Donald Trump currying favour with the religious right—from his attacks on secular institutions to his nomination of a judge they expect to curtail abortion rights—are very real.

This morning, Foreign Minister François-Philippe Champagne will tell reporters about his European swing. Champagne stopped in Greece, Austria, Belgium and Lithuania to talk with allies about how to deal with a fraudulent presidential election in Belarus, armed conflict between Azerbaijan and Armenia in the contested Nagorno-Karabakh region and flaring tensions between Turkey and Greece in the eastern Mediterranean Sea.

Mea culpa: Yesterday’s newsletter told you that former senator Don Meredith resigned earlier this year. In fact, he resigned in 2017.

Now for something completely different: Sea otters are back with a worrying vengeance in B.C., writes Hamdi Issawi. “Once within a whisker of extinction, the adorable creatures are making a major resurgence,” he writes. “But not all residents view their comeback in a favourable light.”