Ottawa's overhaul of energy policies—and the lack of a pipeline—could be a blow to investor confidence in a struggling industry, says report 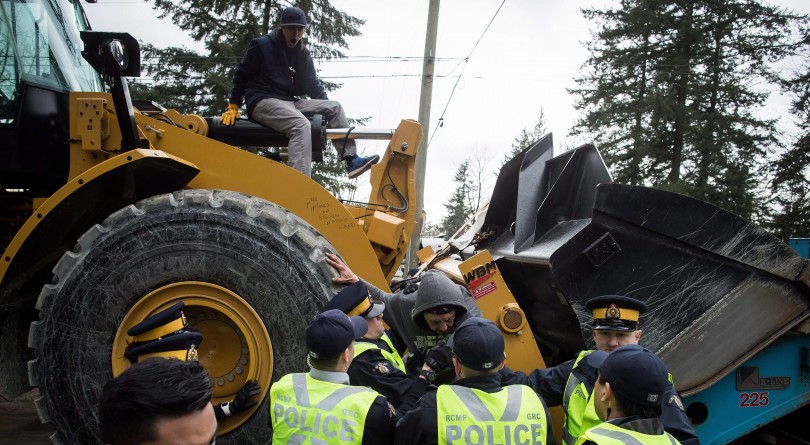 Protesters blockaded an entrance—defying a court order—as heavy equipment was being delivered to a Kinder Morgan facility in Burnaby, B.C., on Monday March 19, 2018. (THE CANADIAN PRESS/Darryl Dyck)

Kinder Morgan’s suspension of funding for its Trans Mountain pipeline expansion this week may have been a blow for the Albertan oil industry, but it could get worse as the federal government goes about its planned overhaul of energy and environmental policies, an internal report suggests.

Bureaucrats had been warning Natural Resources Minister Jim Carr about a potential decline of investment in Canada’s oil and gas production sector as early as last year, as the federal government prepared Bill C-69, a piece of energy legislation currently before Parliament that the industry says will stunt growth.

In a report from last September, obtained under access-to-information laws, officials of the Natural Resources Canada federal department told Carr the government’s policies could be a “regulatory burden” for oil and gas and result in the sector’s losing out on investment.

The absence of a planned pipeline would also have an impact on investor confidence in the oil sands, the report read. The views contrasted with the government’s past public stances that the industry remained competitive and all was well.

In an email on Wednesday, a Natural Resources spokeswoman calls the issues “short-term” and says, “When all factors are considered, Canada remains one of the most competitive jurisdictions globally for foreign investment.” “We are working closely with the provinces and territories, Indigenous groups, industry and stakeholders to examine barriers to investment,” she says.

The report, “Competitiveness of Canada’s Oil and Gas Sector,” was prepared at a time of bleak investor confidence for the industry. A series of foreign giants—including the European multinational Royal Dutch Shell Plc., the Norwegian state-owned Statoil ASA and the American producer ConocoPhillips—had pulled back from the Albertan oil sands, taking with them nearly $30 billion in investment.

At the same time, one of Canada’s most promising proposed export facilities for natural gas, a $36-billion project by Malaysia’s state-owned Petroliam Nasional Bhd., or Petronas, was cancelled by the proponent.

To many in the oil and gas sector—and by extension, in the energy heartland of Alberta—still reeling from the commodities crash of 2014, that bleakness has persisted. Canada’s oil, relatively expensive to extract, is also landlocked and thus expensive to move. More pipelines would help, but those pipelines the industry does not yet have.

Early this week, the United States’ Kinder Morgan Inc., whose Trans Mountain expansion to the west coast has been delayed and facing opposition from British Columbia, gave an ultimatum to the federal government: fix the B.C. problem, or the company will cancel the project.

That would be potentially yet another flight of capital, but it would also be different. It would be the sort of capital flight that causes more capital flight. The government had been warned about that. “Given the relatively remote location of Canada’s oil and gas resources, improved market access is critical,” bureaucrats wrote in the September report, adding that “doubts” and “investment delays” in the oil sands “may persist” unless new pipelines are built.

It would not help if the Liberal government—boosted to power in part by votes from environmentalists and Indigenous Canadians, many of whom oppose major energy projects—strangles the carbon-emissions-heavy oil and gas industry through its new policies, the report’s authors wrote. “Each individual legislation is not expected to have a material impact, but collectively, they could affect the overall competitive standing of Canada’s resources and deter investment.”

To fulfill their pledge to tackle climate change by significantly reducing greenhouse gas emissions, the Liberals have introduced a nationwide tax on carbon and restrictions on methane output. The government also banned oil tankers off parts of the west coast, effectively killing one proposed pipeline project even as it approved two others, including Trans Mountain. As well, the government is overhauling the way it approves major energy infrastructure in Bill C-69, a move that critics have said makes it harder for oil and gas projects to get the green light, even as Natural Resources says it makes it “easier for good projects to move forward.”

But those are not all that could cause capital flight, the report read. There is another beast with which to reckon: Donald Trump.

The American president has made loosening regulations on domestic oil and gas a priority and withdrew from the Paris climate accord, an international agreement to combat carbon emissions. Trump’s moves “could place U.S. producers at an advantage over their competitors,” the report read.

“Given that Canada competes with the U.S. for capital, it is important to assess how the cumulative effects of Canadian climate policies, combined with the move towards deregulation in the U.S., could impact investment flows,” the authors wrote. “The perception that future regulatory burden and associated costs will be higher in Canada compared to competing jurisdictions may result in flight of capital.”

The Canadian Association of Petroleum Producers industry lobby group, which viewed a copy of the report, says it is “encouraged” that the study aligned with some of its positions. Since the report, the government has also been more ready to acknowledge what the industry says are the increasingly fell circumstances facing the sector, says Ben Brunnen, the association’s vice-president of oil sands and fiscal and economic policies. But mere acknowledgement is not enough, he says. “We haven’t really seen the government do anything.”