Bill Morneau will be wearing NAFTA shoes to the budget

The finance minister's budget day footwear is designed in Edmonton, made in Léon, Mexico, and filled with symbolism 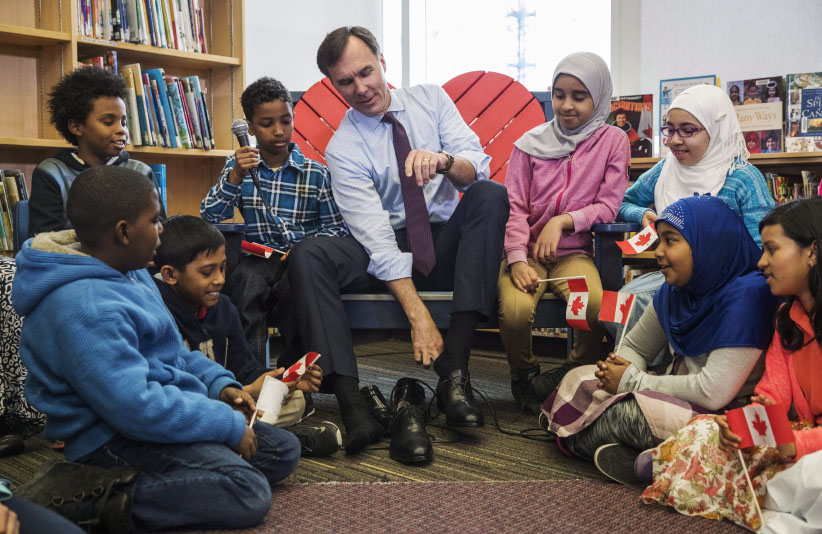 When Finance Minister Bill Morneau rises on Wednesday afternoon to deliver his second budget, he’ll be standing in the handiwork of Justine and Kendall Barber. The sisters run Poppy Barley, an Edmonton-based shoe manufacturer and retailer. While a stage-managed shodding is a staple of Canadian budget days, Morneau’s choice of footwear carries some seemingly-purposeful symbolism: They’re NAFTA shoes. Poppy Barley’s products are designed in Canada, made in Mexico, and shipped between the two countries overland through the United States.

Morneau unveiled his new black capped oxfords during a visit to Nelson Mandela Public School in Toronto today. Poppy Barley’s calfskin “Edmonton oxford” shoes cost $250 for standardized sizes available at its showroom—the finance minister is a 12—and $398 for a customized fit, available online. “We make all of our shoes in Léon, Mexico,” explains Caroline Gault, director of content and community. “The city’s industry really runs on leather goods and shoemaking.” The footwear is then ground-shipped via FedEx to Edmonton, and e-commerce orders are distributed by Canada Post.

Sourcing in the fashion industry has been a hot-button topic in recent years. Canadian labels like Joe Fresh and Gildan Activewear have come under scrutiny for working conditions at factories in Bangladesh and Haiti. More recently, president Donald Trump’s protectionist credentials were rumpled by the discovery that his campaign’s signature “Make America Great Again” hats may in fact have been made elsewhere.

In contrast to the new U.S. administration, Canada’s Liberal government has remained positive on free trade, with prime minister Justin Trudeau and various members of his cabinet touting the economic growth it creates and suggesting the country could benefit from its continued openness to global commerce.

Morneau’s predecessor, Conservative Joe Oliver, bought blue-and-black New Balance runners for his only budget, in 2015; the late Jim Flahery also varied his footwear, picking steel-toed wing tips from safety-shoe manufacturer Mellow Walk in 2014 and black Oxfords from Canadiana staple Roots in 2013. The latter choice proved controversial, with the Toronto Sun noting that the company does much of its manufacturing elsewhere. The  sensitivity around previous finance ministers’ choices of shoes would suggest that Morneau knew what he was doing when he picked this particular pair to try on. From Trudeau’s cabinet selection criteria down to his much-cited selfies, this is an administration with a firm handle on symbolism and gimmicks. That the finance minister would wear NAFTA shoes seems no accident.

Poppy Barley showcases its supply chain on its website, highlighting the Léon factories that make its shoes and accessories and touting its “ethically made” and “socially responsible” credentials. The company looked in other footwear hubs like Portugal, Italy and China but settled on Mexico because of the history of the craft and the ability to closely control sourcing and manufacturing. “It’s really, really all about the people for us: fair wages, good working conditions, ongoing training and opportunities, rights and freedoms, benefits,” Gault says.

The minister’s team contacted Poppy Barley a week and a half ago, according to Gault. The brand was chosen for its “innovation in the e-commerce space, [being] a Canadian company and female-founded, and [its] ethical manufacturing.” The oxfords are his first pair from the brand.

Unlike Trump, Morneau is clearly happy to stand on his free trade principles.