The former U.S. ambassador to Canada has left his gig north of the border, but he remains a freelance advocate for the Canada-U.S. bond 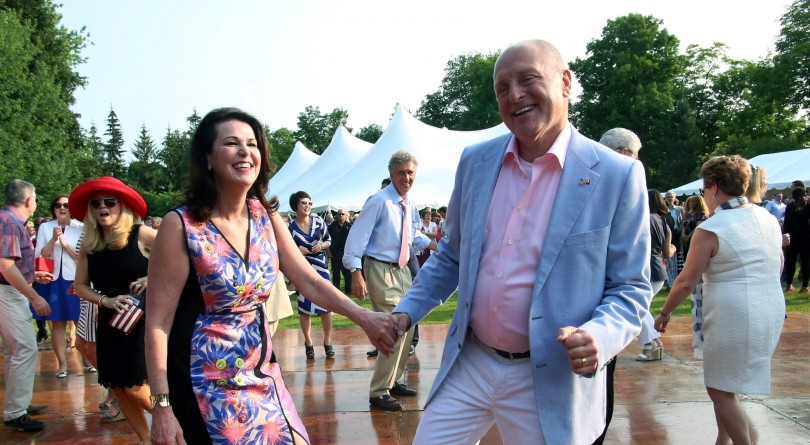 Peter Navarro was not pleased with a certain Justin Trudeau. At the G7 summit in Charlevoix, Que., on June 9, the Prime Minister had reiterated that Canada would impose countermeasures on the U.S. in retaliation for its metal tariffs and proclaimed that his country would not be “pushed around.” Appearing on Fox News Sunday the next morning, Donald Trump’s trade adviser said there was “a special place in hell” for “dishonest and weak Trudeau,” who he claimed had tried to hoodwink the president.

A third intervention in this brewing rhetorical battle came from Bruce Heyman, U.S. ambassador to Canada from 2014 to 2017. On the Monday morning, he took to CNBC and called for an apology to the Prime Minister and the Canadian people. A tweet liked 18,800 times followed and, by Heyman’s count, a further seven television hits plus three newspaper and two radio interviews. On Tuesday morning, Navarro apologized, part of a broader walk-back of criticism of the Canadian government by the Trump administration.

READ MORE: Inside Canada’s plan to stop Trump from ripping up NAFTA

Score one for Heyman in his current role as freelance advocate for the Canada-U.S. bond. The former top diplomat, once largely unloved in Ottawa’s corridors of power, has become one of the most prominent Americans publicly proclaiming that the Trump administration is getting it wrong when it comes to its northern neighbour. American ambassadors keep their titles for life. “That comes with responsibility,” Heyman says. He also expressed his intention to be “a voice of truth where there are lies, [and] a voice of light where there [is] darkness.”

Republican senators Jeff Flake and Susan Collins were among those to oppose Trump’s post-G7 line on Canada. Expressions of support from U.S. elected officials may not amount to anything—trade policy belongs to Congress, but it has thus far been willing to defer to the administration. “Canada doesn’t have any vote in congressional elections, and [the] most important thing to a member of Congress is re-election,” says Laura Dawson, director of the Canada Institute at the non-partisan Wilson Center, based in Washington, D.C. Only when domestic constituents demand the lifting of these levies will Congress be compelled to act, she says.

That may happen soon enough. The effect of the metal and other tariffs is just starting to be felt in middle America, says Eric Miller, president of the Rideau Potomac Strategy Group, also based in Washington, D.C., and a former Canadian foreign affairs officer. At some point, particularly if the midterms change the composition of the body significantly, Congress will “reassert their jurisdiction.” That’s when advocacy like that of Heyman and other Canadaphiles becomes particularly important. “The American way of lobbying [is] relentlessly and repeatedly making the case from many different angles,” says Miller. Every TV hit and op-ed helps draw attention to the relationship. “Canada is sort of like the cousins who live up north—basically well-liked but not thought about that much.”

Heyman is hardly the first ex-ambassador to comment on the relationship after leaving the posting—Miller notes that during Barack Obama’s time in office, George W. Bush’s appointee, David Wilkins, publicly supported the Keystone XL pipeline. But Heyman is a high-profile Democrat and Obama appointee panning Trump—a president who has little patience for the other party, his predecessor or criticism in general. Speaking generally, Dawson says that talking heads must be “very careful that what we say doesn’t undermine the diplomatic activities that are going on.” Heyman says he’s sensitive to the risk of further antagonizing the administration, but that his advocacy is not on behalf of any single party on either side of the border.

RELATED: How Canada’s charm offensive hit a wall of apathy

Still, political contribution data from the Federal Election Commission shows Heyman and his wife, Vicki, have resumed donating to Democratic Party candidates since leaving diplomatic office. And the former ambassador is a special adviser to Canada 2020, an Ottawa non-profit with ties to the Liberals. Heyman helped bring Obama to Toronto for a 2017 appearance hosted by the organization, and he was Environment Minister Catherine McKenna’s interlocutor on stage at the Canada 2020 Conference this June in Ottawa.

Other former top emissaries have monetized their knowledge of, and concern for, the bilateral relationship. Former Canadian ambassador to the U.S. Gary Doer was retained by Alberta in 2017 to advocate on softwood lumber. Wilkins was named New Brunswick’s envoy on the same natural resource file, while the law firm at which he is a partner reportedly earned $3 million from the Saskatchewan government and its agencies between 2009 and 2014. Heyman, who spent three decades as an investment banker in Chicago for Goldman Sachs, has no day job. He and his wife are spending “pretty much most of our time” on the U.S.-Canada file, he says. “You have a very strong couple as advocates for the relationship.”

It’s something of a volte-face for Heyman, who occupied a decidedly less favoured place in Canada in the months following his arrival in Ottawa in 2014. A Globe and Mail article the following year reported that the top U.S. diplomat was having difficulty getting face time with then prime minister Stephen Harper and members of the Conservative cabinet. Among the irritants that prompted this cold shoulder was the Obama administration’s reticence on Keystone.

“There can be moments of frustration” in bilateral ties, Heyman acknowledges, though he insists that by the time the article appeared, relations with the Harper regime had improved, describing it as “reporting a rainstorm that happened last week.” The solution he and his wife hit upon was to leave the capital in search of other Canadians with whom to talk. These days, Heyman says he is “talking to all of my friends I developed in Ottawa and across the country—business, government [and] social,” including people from all parties. He declined to say whether he’s being briefed by the Liberals about the course of NAFTA negotiations or if he checks in with them before his media appearances; Global Affairs Canada did not respond to questions about contact with Heyman or whether the government is concerned about possible blowback on Canada from his criticism of the Trump administration.

Heyman predicts the U.S. and Canada will ultimately rise above their present problems. “I believe this too shall pass,” he says. If it’s tempting to substitute “this” with “Trump,” well, the ambassador says he’s concerned the situation “gets worse before it gets better,” considering the current disposition of the White House. A nation “can’t go get another new next-door neighbour,” Heyman notes. For now, he’s hoping Canadians can be patient with the one they have.