Paul Wells: The budget focuses on the sort of things a government like Canada's should be working on right now. But the big bet is on childcare—and the devil is in the details. 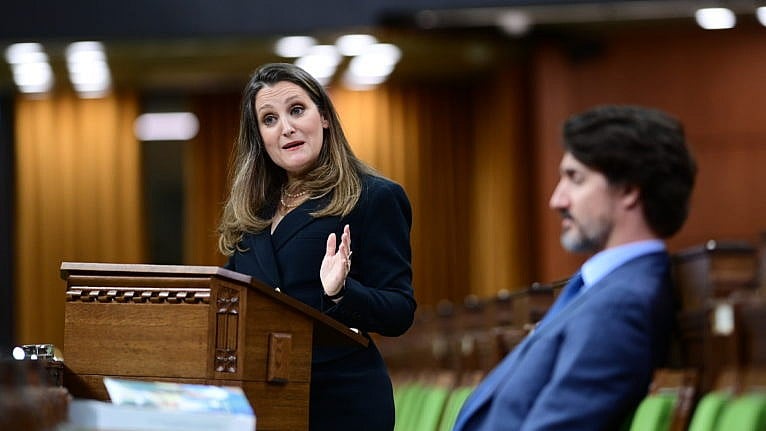 Freeland delivers the federal budget in the House of Commons on April 19, 2021 (CP/Sean Kilpatrick)

Maybe we should begin by eliminating some straw men.

The result is more or less the budget you would have expected, plus child care. I’ll get to the child care part in a moment. It’s big.

Otherwise, most of the budget’s big new spending simply extends last year’s big spending on income support, because the coronavirus is still with us. There’s $10 billion in 2020-21 to extend the Canada Emergency Wage Subsidy; $9.6 billion in 2021-22 to enrich the Canada Recovery Benefit and regular Employment Insurance; billions more in assorted measures to replace job income for people who can’t do their jobs. This is what dug the government into its very large deficit hole. It made sense to do this stuff. And it does not yet make sense to wind those programs down.

At a smaller scale in dollars, there’s a lot of effort to ensure Canadians head into the post-pandemic world with the skills and business capabilities they need to succeed. The dollar amounts are modest-ish. There’s $4 billion over four years to recruit 28,000 young Canadians to help small businesses adopt new technology. I’m curious to see whether that money winds up getting spent. How many businesses will agree that what’s on offer from Ottawa matches their business plan? A federal official we’re not allowed to name was very excited when describing all this stuff to reporters, but this is not our first skills rodeo. Making the offer match the need is a challenge that has vexed governments for longer than I’ve been in Ottawa. Hope for a better result springs eternal. But there are reasons why the earlier attempts didn’t work.

On to child care. The pandemic revealed a gap in Canada’s social programs, Freeland says, one that previous Liberal governments had promised to fill and one on which Trudeau’s government had made listless, modest progress. Those days are over. This budget provides $30 billion over five years, leading to a steady spend of more than $8 billion a year forever after, for “early learning and child care.” It’s by far the biggest new spending item in the budget. The devil will be in the details. There are many details.

First, I now officially haven’t the faintest idea what Justin Trudeau meant when he wrote to his new finance minister three months ago telling her she “will avoid creating new permanent spending.” She sure didn’t do that. One suspects he won’t mind. Public officials should be reluctant to make it this clear their instructions have no meaning.

Second, the point of the “no new permanent spending” charade was that the provinces, unanimously, have specific ideas for new spending. They’d like $28 billion a year in new health transfers. It’s a ludicrous sum but directionally a perfectly fair request. As Quebec’s François Legault points out, the most obvious gap the pandemic revealed is a shambles in long-term care, and once he hires more long-term care workers, he’ll be expected to pay them every year. Similarly, intensive-care capacity won’t stop being a problem after COVID; it was already a problem before the outbreak; and it’s likely to be aggravated over the medium term by all the diseases and conditions whose routine treatment got elbowed aside by the pandemic.

Since it became clear the premiers were unanimously and reasonably calling for increased health transfers, they’ve had three answers from Ottawa: “No;” “we’ll give you $3 billion a year for public transit;” and “we’ll give you $8 billion a year for daycare.” No federal government is ever obliged to do what provincial governments demand. But child care will mostly be administered by provincial governments, so the disagreement over the best use of the next transfer dollar is not merely academic. It’ll directly affect the tone, and perhaps the success or failure, of necessary negotiations on program design.

Very big questions of program design will need to be crunched. Will for-profit childcare centres be eligible? The budget document suggests some will. Advocates of not-for-profit care may be highly displeased.

I wonder what welcome a new child-care solution will receive among parents who don’t work schedules that fit well with daycare operators’ schedules. All the evidence suggests there’ll be more such parents in the near future than there already were. And finally, there is unpopular but serious academic research questioning the developmental benefits of the Quebec daycare model.

I suspect the answer to such criticisms will be that there’s a consensus in favour of child care; that Ottawa’s money offer is substantially non-negotiable; and that provinces mustn’t look gift horses in the mouth. Many will accept the offer, some with more or less enthusiasm than others. I wonder what they’ll say about this budget’s claim that Ottawa is offering to pay for half of the new program, given that the basis of their health-care demands is that Ottawa once paid for half of health care and has lately been covering less than a quarter.

Anyway I’m also not sure we’ll be talking about any of this in two years. Previous depositories of the Prime Minister’s enthusiasm—pharmacare, the Canada Infrastructure Bank, the innovation superclusters—are now mired in delay or indifference. This Prime Minister didn’t finish a lot of projects in life before he moved to Ottawa, and his inexhaustible affection for new projects will be tested if he keeps the job long enough for this project to become less thrilling.

The last thing worth saying about this budget is that it’s actually not particularly loopy. The things Trudeau and Freeland focus on here are the sort of things a government like Canada’s should be working on right now. A couple weeks ago the OECD, the economic club Bill Morneau once hoped to run, released evaluations of member states’ economic prospects and policy choices. The page for Canada said we’d do well to “strengthen support for vulnerable households;” “increase the labour-market participation of women;” “reduce barriers to internal trade;” “reduce barriers to entry for both domestic and foreign suppliers” by increasing competition and reducing regulation; “eliminate inefficient tax expenditures;” and increase carbon prices.

By my reckoning, the government is hard at work on support for vulnerable households, labour-market participation of women, and carbon prices. It’s doing very little on the rest. Let the debate begin on whether this budget is a triumph or disgrace. From where I’m sitting it’s kind of middling.