Butts, French, and the right-hand syndrome in Canadian politics

Paul Wells: What can we learn from the top lieutenants in Ottawa and Queen's Park? That politics today is a game of constant combat. 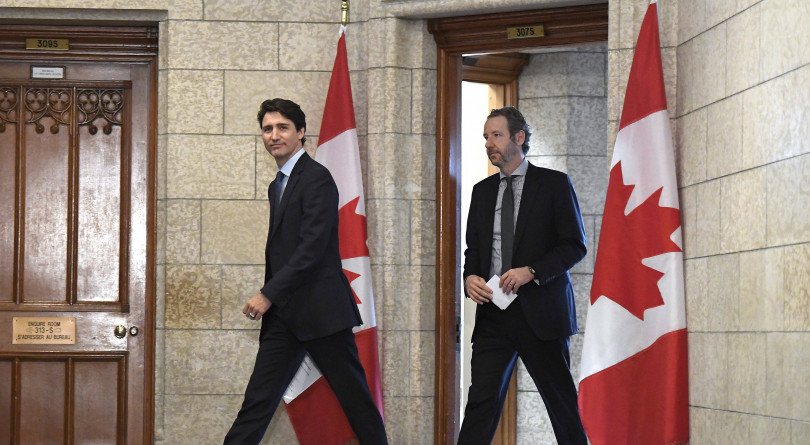 Trudeau leaves his office with Butts to attend an emergency cabinet meeting on Parliament Hill on April 10, 2018 (Justin Tang/CP)

As is so often the case, I blame Jed Bartlet. “You got a best friend?” The West Wing‘s president asks Roger Tribbey, the secretary of agriculture, a one-off role played by Harry Groener in episode 12 of season 1, “He Shall From Time to Time.”

“Yes sir,” Roger says gamely. It’s the night of the State of the Union address, and Jed’s off to give the big speech. Roger is this year’s designated survivor, the guy who’s supposed to become president if Bartlet and the rest of the line of succession get blown up over at the House of Representatives.

“Is he smarter than you?” Bartlet asks about Roger’s friend. “Yes, sir,” is the answer.

“That’s your chief of staff.” Of course by this point Leo McGarry is in his office next door, and he’s Bartlet’s chief of staff, and we are reminded that this is how Leo got the big job, and everyone starts to get a little misty.

Now, sometimes it works out. Jean Chrétien met Jean Pelletier at the Séminaire St.-Joseph in Trois Rivières and 40 years later Pelletier was Chrétien’s chief of staff in Ottawa. Pelletier was exactly the sort of person Jed Bartlet would have recommended. But even some happy veterans of those days suspect that more distance between the two men would have helped both avoid administrative blind spots, like the sponsorship scandal.

Then there are the cases, otherwise not similar, of Dean French, who quit on Friday as Ontario premier Doug Ford’s chief of staff, and Gerald Butts, who resigned in February as Prime Minister Justin Trudeau’s principal secretary. What do these two departures have to tell us about the governing styles of two very different leaders, and, if anything, about what ails us today as a society?

The differences, it should be noted, are as striking as the similarities. French isn’t gregarious; Butts is. French rarely made public pronouncements about his work or the Ford government’s; Butts’s Twitter account was a running commentary about Trudeauism and its real or imagined allies and antagonists.

French became a polarizing figure within five months of the Ontario Conservatives’ 2018 election, sparking a long profile by the Globe’s Adam Radwanski that still offers your best understanding of French’s style. (“He is said to have a tendency to conduct negotiations for high-profile public positions—in some cases, lucrative arrangements off brand for a populist conservative government—without others being looped in, presenting them to Mr. Ford as done deals,” Radwanski wrote, in what sure looks like foreshadowing now.)

Butts was, for much longer, portrayed at least in news columns as one of his boss’s greatest assets. In fact it’s been cliché in Ottawa for five years now to describe Butts as the real brains of the operation. When I started to be more critical of Trudeau’s government in December I was surprised how many Liberals were delighted to read this stuff, and felt there were serious bugs in the machinery that needed to be talked about.

So the styles and backgrounds of the two departed advisors are distinct, but maybe we can spot some overlap. A few possible candidates:

Inexperience at the level of government in question. French was part of Ford’s kitchen cabinet in Toronto municipal politics, and had some business success, but Queen’s Park, as idiosyncratic a political culture as any legislature in Canada, was news to him. He set to work pushing aside members of other factions with different backgrounds—federal Conservatives close to Stephen Harper, the remnants of the Patrick Brown shop—but in the end, you need to know the plumbing of a place to run it. Conservatives had been out of power for 15 years in Ontario; their institutional memory was shot. How could they be surprised that overreach and inability to make the machinery move would be a challenge?

Butts knew Queen’s Park well, having worked there for Liberal premier Dalton McGuinty. But neither he nor his colleague Katie Telford, Trudeau’s chief of staff, had experience working in government at the federal level. Telford had worked for Stéphane Dion, the least successful federal leader in the party’s history before his successor, Michael Ignatieff. Here again, a long stint in the political wilderness, almost 10 years and three changes in leadership (four if you add Bob Rae) from early 2006 to late 2015, did not help the new government. When the Liberals elected 148 MPs in 2015 who’d never served in Ottawa before, the Trudeau PMO implemented tight message discipline—run by senior staff who had no more experience in federal government than the rookie MPs did, on behalf of a prime minister who had never held a cabinet post.

Surely that’s just the way things work, though? If parties spend ages in opposition, surely they’re stuck trying to manage as rookies when they do get in? Sure, but there are ways to mitigate that. Stephen Harper promoted two veteran Progressive Conservatives, Senator Marjorie LeBreton and longtime staffer Bruce Carson, to senior advisory roles when Harper became Conservative leader, even though he didn’t particularly agree with either on a lot of policy files. They brought a more important advantage: They knew how Ottawa works when it works. They had managed through crises before.

And when Harper got into trouble later on, he was more adept than Trudeau, at least, has been at reaching way outside his comfort zone for new management muscle: neither Guy Giorno nor Nigel Wright, his second and third chiefs of staff, were close to him personally. Yeah, I know, the Giorno years didn’t end well, but by then Harper’s office had shed a lot of its grey-haired staff and was relying on people who’d grown up in the Harper Conservative ecosystem.

Campaign-to-government continuity. There’s a quaint notion that the skills you need to win an election aren’t the ones you need to govern. That idea has gone just about completely by the wayside, including in the Trudeau and Ford camps, though it took quite a bit longer in Ottawa. How do you win a campaign? With hundreds of people doing the same thing—door-knocking, voter ID, hammering on message. How do you govern? Well, in the old days, it was often with deliberation, the patient application of effort over a long time with little immediate payoff, and a distinctly different tone from the more heated rhetoric of the campaign trail. Harper started to collapse those distinctions when he was elected with a perilously slim minority in 2006. Now generations have grown up thinking that’s the only way to do things. And of course, each side tells itself it must behave that way because the other will, so nobody dares disarm.

Insecure bosses. One doesn’t have to sink too deeply into one’s armchair-psychiatrist’s armchair to note that just about the last person who was going to bring Dean French into line was Doug Ford, just as Justin Trudeau was unlikely to offer much criticism of Butts or Telford. Both leaders seem adrift without their closest advisor. Other leaders have seemed more independent; Brian Mulroney comes to mind. But this is a key weakness of the Jed Bartlet formula for picking a lieutenant: who on earth do you hire after you’ve lost your best friend who’s smarter than you, whom you’d trust with your life?

Constant combat. If you never leave the campaign trail behind, if you’re not great at making the machinery work, if you’re not wired for delegating, what’s left? A kind of never-ending red alert is what. All hands on deck, an us-or-them lens on your colleagues, on potential appointees, on the scribes in the gallery. This constant combat mode is not only the strongest parallel between French and Butts, it’s near-pervasive in politics today, and I think it’s part of what so many voters find so off-putting about today’s politics: it’s so often politics instead of government.

Of course political lifers live for combat, sweat the next confrontation, hold grudges from the last one. But most voters are voters only every few years. They’re citizens all the time in between, and for the life of them they did not elect their governments for constant combat. The things that excite small donors—the us-or-them polarization, the constant crisis, the nonstop “Paul, you’ll never guess what my opponents are up to now” fundraising emails—exhaust everyone else.

I’ve been on this theme since Stephen Harper refused to meet with Kathleen Wynne: Most people aren’t excited by the latest snub or slight between you two. Most people are counting on their governments to bring more order, peace and concord to the affairs of state, not more heat, acrimony and score-settling. A lot of people had voted for the Harper Conservatives and the Wynne Liberals, just as a lot—fewer, but still a lot—have voted for the Trudeau Liberals and the Ford Conservatives. Even if they vote more consistently, they didn’t vote for a fight.

We could use fewer buddy pictures in our national life, and more low-key, emotionally unloaded, functional working relationships.