Cabinet is not a meritocracy. And it hasn't been for decades.

Home province, first language and whether a prime minister trusts an MP are all methods of picking a cabinet. Gender is no less arbitrary.

Justin Trudeau will introduce his cabinet on Wednesday at Rideau Hall.

We’ll soon find out who will be in Justin Trudeau’s cabinet, bringing to an end Ottawa’s favourite post-election game (ranking just above “Who will win the election for House Speaker?” and, “Who will get to chair the procedure and House affairs committee?”). Inextricably linked to this season’s cabinet speculation is debate over Trudeau’s pledge to have women fill half the ministerial roles.

A lot of people have argued against the pledge; some women find it patronizing. The men and women opposed are offended by the idea that one person’s—let’s face it, one man’s—merit might be overlooked because of that Y chromosome. Others don’t like the quota, which Trudeau isn’t legislating, by the way; he simply set himself a goal.

Here’s the thing: Cabinet is not a meritocracy. It hasn’t been, at least as far back as 1968. It’s always been influenced by a range of factors, including where an MP is from and whether he or she is an anglophone or francophone. And while those factors are practical, other selections seem to be made based on someone’s fundraising ability or skill at obfuscating in the House of Commons.

Give me a good merit-based reason why Julian Fantino held three cabinet posts, all of them disastrous. What exactly qualified Fantino to be the minister for international development? Or look at Peter MacKay, who held a range of high-profile posts, including Foreign Affairs and Justice. Any time cabinet speculation took over with the Conservatives in charge, it was assumed he would never be excluded from cabinet, simply because he was the PC leader who agreed to merge the party with the Canadian Alliance, thereby allowing Stephen Harper to lead the combined forces to victory. Never mind the bungled military procurement files or his use of a search-and-rescue helicopter to shave a couple of hours off his trip back to Ontario when his vacation was interrupted. And who can forget Chris Alexander’s deft touch with immigration matters?

Given that women are half the population, it’s downright strange that no federal government before this one has striven to put more of them into cabinet. Lots of deserving people are left out of cabinet, simply because there are too many excellent MPs from one region or another, and not all of them will make it. It’s bizarre to argue that Trudeau’s pledge to include more women in cabinet means leaving out qualified men, because the corollary is that so many women have been left out of cabinet to squeeze in men who have better fundraising networks, are better known to Ottawa-based party insiders, or know how to follow orders. 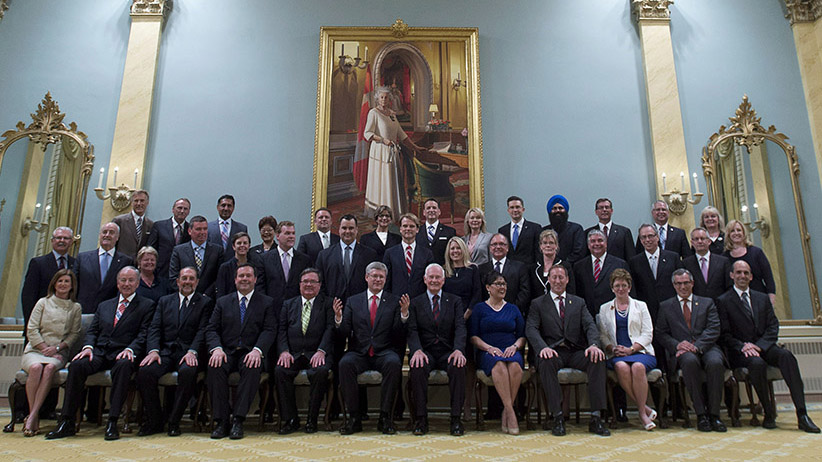 Stephen Harper, front centre, poses for a group photo with the federal cabinet announced during a ceremony at Rideau Hall in Ottawa on Monday, July 15, 2013.

Neither does it necessarily mean the cabinet will be full of white people (although, honestly, did you not see the last few?). Take a look at all the qualified people in the Liberal caucus. Read the bios of some of the women. Seriously, take a look and tell me whom you’d leave out. Just as great, skilled men will get left out, excellent, skilled women would get left out without aiming to include more of them. And for what reason? Because we aren’t used to seeing gender used as a measure of cabinet’s balance?

Canada’s federal parties have a long way to go to hit gender parity and to elect a representative number of visible minorities. There are 5o women in the Liberal caucus of 184 MPs, for example. While the NDP led the way with 43 per cent female candidates (rather than quotas, they asked riding associations to look for female or visible-minority candidates), the Conservatives were only able to find enough female candidates to make up 19 per cent of their total. You can’t tell me there aren’t more smart women who would want to run if they didn’t feel the hurdles were too high to clear.

We’ll soon see how the Trudeau cabinet balances experienced MPs and new faces, and other considerations. Some will be duds, some will be new stars. Whichever women make it will undoubtedly put to rest this debate.