Caesar-Chavannes: The latest woman to experience things differently than Trudeau

Politics Insider for March 11: Debating Wernick's fate, Scheer's poor hearing, and just where did that 9,000 jobs figure come from? 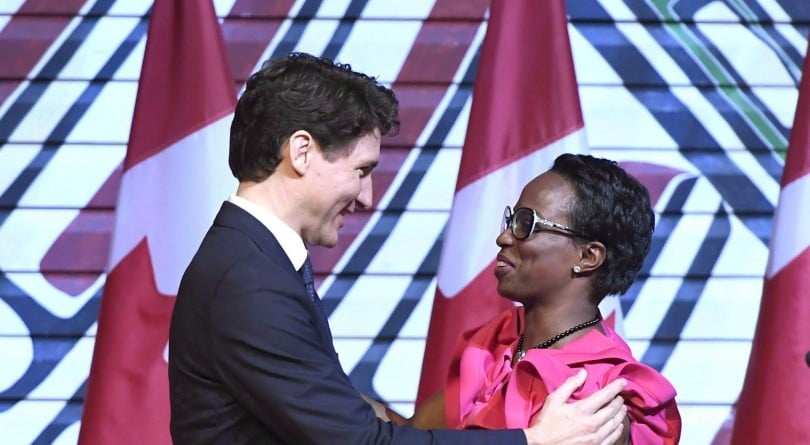 With an eye towards ultranationalist movements rising around the world, the Liberal government boosted funding in this week's federal budget to address issues of anti-immigrant sentiment and racism bubbling up at home. Prime Minister Justin Trudeau is welcomed by Parliamentary Secretary to the Minister of International Development Celina Caesar-Chavannes, as Minister of Canadian Heritage Melanie Joly looks on, during a Black History Month reception at the Museum of History in Gatineau, Que., on Monday, Feb. 12, 2018. THE CANADIAN PRESS/Justin Tang

The Wernick question: When this fall’s federal election gets underway, five bureaucrats have the job of warning Canadians about foreign attempts to meddle in the campaign. If the Conservatives and NDP have their way, Privy Council Clerk Michael Wernick won’t be among them. (Toronto Star)

As Canada’s top bureaucrat Wernick sits on the panel that will assess intelligence reports of foreign election interference and decide whether to notify the public. But after former attorney general Jody Wilson-Raybould named Wernick as one of the officials who tried to pressure her to give SNC-Lavalin a get-out-of-prosecution card, and with his testimony to the justice committee seen as overly partisan, the opposition argue Wernick is too compromised to hold that position. Waving aside those concerns, Democratic Institutions Minister Karina Gould says Wernick is staying put. (Scroll down in the newsletter to the weekend politics show round-up for more from Gould.) (Global News)

She said, he said, he said: Yet another rift has opened within the Liberal caucus, this one pitting soon-to-be-former Liberal MP Celina Caesar-Chavannes against Prime Minister Justin Trudeau. After dashing off a mysterious tweet last week that apparently took aim at Trudeau’s leadership style, Caesar-Chavannes told the Globe and Mail Trudeau reacted angrily when she first told him she planned to leave politics. “He was yelling. He was yelling that I didn’t appreciate him, that he’d given me so much,” she said. The PMO shot back with what has become a familiar refrain—that yet another woman in Trudeau’s cabinet experienced things differently than he did: “There’s no question the conversations in February were emotional, but there was absolutely no hostility.” (Globe and Mail)

But there was, according to a statement from Caesar-Chavannes’s husband Vidal Chavannes, who says he was listening  to his wife’s phone call with Trudeau on speakerphone. “What I heard from that call was misplaced anger and frustration.” (Twitter)

It all apparently moved Caesar-Chavannes’s colleague, Liberal MP Anita Vandenbeld to rush to defend how Trudeau treats women in the Liberal caucus: “Trudeau has always listened to the voices of women, even changed his mind after hearing the views of women’s caucus. I have never once felt that I couldn’t speak openly to him, even disagree with him.”  (Twitter)

Selective hearing: While Conservative Leader Andrew Scheer was at a town hall in southwestern Ontario last Friday, a crank in the audience launched into a rambling question about Trudeau government’s support of “the Clinton Foundation” which the man falsely declared was “part of child trafficking and child sacrifice … it is in the pizzagate.” The audience launched into applause, and rather than set right the conspiracy theorist, the Conservative leader zeroed in on Trudeau’s spending instead.

Facing questions and criticism from the media and Trudeau over his handling of the question, Scheer and his office have since offered up several explanations for why he failed to call the man out: that he didn’t hear the question (or apparently only parts of it), that he was not aware what “pizzagate” meant (a remarkable admission, given the wall-to-wall coverage it got after a pizzagate-inspired gunman shot up a Washington pizzaria in 2016) or that, as he said Sunday, obviously it’s a “ridiculous” conspiracy theory, but Trudeau was just using it to distract from SNC-Lavalin. (Toronto Star, Global News video clip)

If you didn’t catch the weekend political shows, here’s what you missed: