Michael Ignatieff on Canadians' desire for 'something more compassionate' 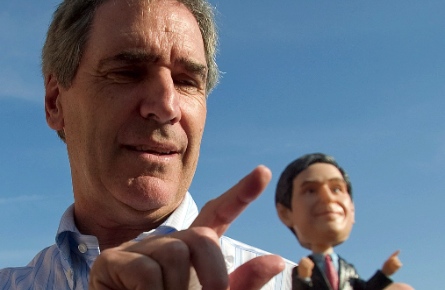 Last night, he drew a crowd of perhaps 400 to the market square in downtown London. After an eight-hour bus ride from Ottawa he was not quite electric on the stage, but he waded in before and afterwards and shook hands and posed for pictures and marvelled at a bobblehead likeness of himself that someone had brought for him to autograph. Inside the market he talked garlic imports with two gentlemen from the agriculture federation. Before boarding the bus he stopped to talk with a group of pensioners who wore matching t-shirts calling for changes to the Bankruptcy Insolvency Act.

This morning he is on the back deck of a handsome house in a well-appointed suburb near the university for a lucrative fundraiser ($250 per person, $400 per couple). The men are in button-up shirts and slacks, the women almost all in pearls.

After dinner out last night with his wife and a night’s sleep, he was slightly smoother here, despite a little light rain that started to fall just as he started to speak and a sound system that was subsequently spotty. Finally ditching the microphone, he was compelled to carry the words himself and seemed to find a flow, maneuvering between the census, education, skills training, unemployment, the renegotiation of public health accords in 2014, home care for the elderly and pharmaceutical coverage.

He took the scene and the setting—”The life on this deck is not possible in other parts of the world.”—to call out for equality, unity and diversity. And from there it was a contrast between division and discord on the other side, compassion and common cause on his. Canadians, he said, are sick of the strife. “They want something bigger. They want something wider. They want something more compassionate,” he ventured. “Let’s get this ceiling off—this lowered ceiling that Stephen Harper has put over the country.”

Then it was back to brunch. And now the bus is being loaded. The Comber Fair beckons.