Can Trudeau make a deal with the premiers to fight climate change?

David McLaughlin, former president of the National Roundtable on the Environment and the Economy, on Trudeau's chances for a climate change deal 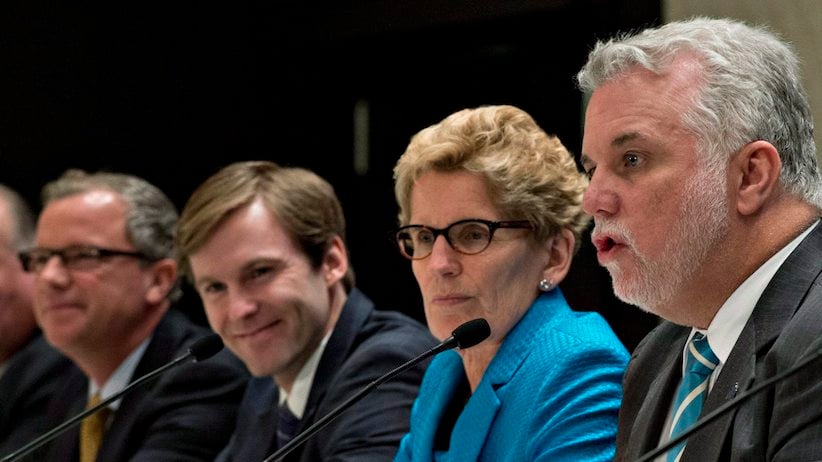 On Monday, Prime Minister Justin Trudeau will convene the premiers to discuss a national plan for reducing greenhouse gas emissions. At week’s end, they will all then fly together to Paris for the United Nations climate conference. Trudeau has then given himself three months to finalize a target for GHG reductions and a deal with the provinces to achieve that target.

To discuss Trudeau’s chances, Maclean’s spoke with David McLaughlin, former president of the National Roundtable on the Environment and the Economy and a former advisor to Brian Mulroney and Jim Flaherty.

First of all, what should we be looking for from the premiers meeting with the Prime Minister on Monday. Obviously, we’re not going to get a new target out of it, but it is the start of a process for the next few months. What are you looking for from that meeting?

I think that’s essentially correct. It’s not going to be a substantive meeting in the sense that we will see a full-blown communique saying here’s what Canada is going to do and here is where Canada is going. It’s a step along the road. And it’s a step not just for Paris in a couple of weeks, it’s a step towards the 90-day clock that Mr. Trudeau has set for himself post-Paris to have a new Canadian plan to achieve carbon emission reductions and potentially a new set of targets for Canada. So when you look at it all together, the history of Canada has been to put targets out and not actually have co-ordinated plans with different levels of government and with various sectors to meet those targets. And the result has been that we have, frankly, just not met targets. Mr. Trudeau is, I think to his credit, trying to reverse that dynamic and saying, look, before we put a target out, let’s actually bring people together, let’s have a discussion, let’s see where there’s duplication and overlap, let’s see where we can co-ordinate and collaborate and then actually try to put a plan in place to achieve this.

This isn’t as easy as that sounds. You can have everybody agree, in theory, that this is a good thing to do and clearly the federal government has changed rhetoric on this—saying climate change is important and the time for denial is over, the time for action is upon us—and that is increasingly shared by premiers across the country, so that is now an open door through which Mr. Trudeau can be pushing. But the nature of emissions in Canada hasn’t changed. Alberta remains the biggest total emitter and the fastest growing emitter. So we don’t know yet what Alberta plans to do on this. Ontario is moving on a cap-and-trade plan, but we don’t know the details for that. Quebec and BC have plans out—Quebec with cap-and-trade, BC with a carbon tax—but they only account for a portion of emission reductions. So that old saying the devil is in the details really does matter here.

What Mr. Trudeau I think is trying to do is at least get the premiers in the same tent, try to get them on some path forward for getting emissions reductions. But it’s going to take more than one meeting. And he’s probably wise to take them to Paris and keep them close and work them on the plane to Paris and see where he can take them.

If they’re not going to have a new target going into Paris next weekend, is there anything to look for from Canada in that setting and do you think there’s anything that can be accomplished in that weekend within the Canadian delegation?

I think that the most important room in Paris for Canada isn’t going to be in the global plenary room at which Prime Minister Trudeau speaks, it’s going to be in the Canadian delegation room. It’s up to Canada to get its act together and pull the various actors together and actually come up with a plan. So I think a lot of what is going to happen, meaningfully, for Canada isn’t necessarily going to be seen or fully realized in Paris at that time. But you’re going to have premiers talking to each other, you’re going to have the prime minister talking to premiers. It’s a chance for them to work together, in a short, but fairly intense, period and see what kind of momentum they might be able to build, kind of see where this could actually go, ultimately to some kind of Canadian plan.

Do you think there is a path forward, there is a deal here to be made? Or is it really, really difficult to see where this ends up?

Well, it is really, really difficult, but I do think there is a path forward. And it requires a different change of frame from people on federal funding and transfers and also in how we frame the issue.

So let me come at it on each, starting with how we frame the issue. This is ultimately a transition issue. How do we transition our economy from an energy-intensive, carbon-intensive economy heavily reliant on fossil fuels? How do we transition this to, increasingly, a low-carbon economy? That’s the long game and it’s really a question, since this is where the world is going of how fast you want to get there. If you want to get there really fast, you’ll probably have to pay more to get there because you’re going to get yourself off coal in Alberta really fast and that costs something. But it’s a more positive framing and it brings us into an economic conversation not just an environmental conversation and we’re hearing bits and pieces of that from this new Liberal government and it’s probably something where people can actually rally around a bit more.

The second piece is perhaps a bit more counter-intuitive, but think of it as a kind of reverse-equalization. Alberta and Saskatchewan are, per capita, the top emitting provinces. This is where the source of much the problem is, in terms of Canada ever meeting any kind of targets. Well, they’re probably going to need federal monies to help mitigate that in some fashion, either through infrastructure or other measures. Well that tends to go against our traditional equalization formula of haves and have-nots. That’s a different sense of how to approach it. And that means that probably per capita funding on infrastructure might not do it because most of the problem is in those two jurisdictions. They might need more money. And then people will say, well, wait a minute, they’re relatively rich, why are have-not provinces giving more to these have provinces financially, except that if you want to meet this national goal, you have to do something different with it. And then you fit that in with other provinces saying, well, wait a second, we’ve been doing this and we should get a bit more for the effort that we made early on. Welcome to federalism. Why would you have that discussion? Because it’s 2015.

The other piece of this, it seems to me, is the public. It has generally been accepted that reducing greenhouse gas emissions is going to come with a cost and that the public will probably end up covering some of that cost and there has been some doubt as to whether the public is willing to pay that cost. The 2008 election still seems to loom over this with Stephane Dion’s proposal of a carbon tax and the Liberal party’s defeat. How difficult is that piece of this puzzle and the politics of getting the public to accept what may be necessary?

It remains a fundamental issue, a core political problem for any government trying to deal with this. It’s how much you can expect people to pay and how quickly you want them to pay it. It’s the old adage of what was said by Louis XIV’s finance minister, the art of taxation is plucking the most feathers from the goose with the least amount of hissing. There’s a reason what Premier Clark of British Columbia has capped the BC carbon tax and said it won’t rise for awhile. There’s a reason that Alberta, even with its more modest, $15 per tonne emissions intensity tax on certain sector, are treating corporations like people and saying, oh, there’s a limit to what they can do. There’s a reason Ontario is going with a cap-and-trade system, which has indirect carbon pricing and impacts on taxpayers and voters, as opposed to a carbon tax where they are labelled with that directly. And, absolutely, there’s a reason the 2008 “green shift” of Stephane Dion now looms large over this.

You put that together and that’s a recipe for, oh, well, we can’t do anything, it’s going to be really difficult. But something is happening at this time where I believe that there is a more genuine and deliberate sense that more has to happen on this file, now. It’s too soon to call it a political turning point, but it could prove to be. There is a short political window that I think has opened up for Mr. Trudeau to act on this, beginning with his massive majority and the goodwill that has been attached to that by Canadians. With provinces having done a lot of the heavily lifting—I mean, virtually three-quarter of the emission reductions projected to date are coming from provincial actions, not federal actions. And Mr. Trudeau is engaging with them. We now have an NDP premier in Alberta. If that premier doesn’t act on climate, whoever will in Alberta?

The Paris talks seem to have some momentum to act and do something sooner rather than later, with perhaps a larger global deal with China and maybe even India and the U.S. is there. And increasingly the science is saying this is a problem and we’re seeing more and more manifestations of climate change, severe weather, wild weather and really negative impacts on the environment.

So this window has opened up, which I don’t think has been there for perhaps as much as a decade. And if Mr. Trudeau is able to seize this, then I think he can get by that kind of political inertia that you talked about that is there, and convince Canadians that there’s some cost to pay, but that we have to do it. And I go back to my low-carbon economy framing, if he can tie this into that and say, this is going to be really helpful to cementing our economic prosperity going forward, this is good future thinking for us and we’re going to see some early results on it, then I think that helps too.