Can the Liberals' infrastructure bank live up to political promises?

The infrastructure bank, and its plan to lure private money to finance 'transformative' projects, is still a question mark for many Ottawa watchers 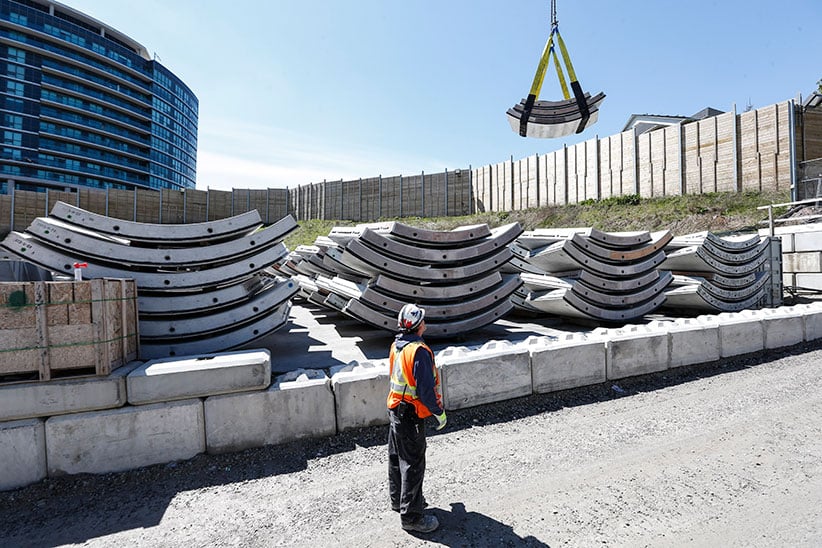 Segments are lifted by crane from ground level onto a rail system that will move them into the tunnel at the Eglinton Crosstown east launch site. (Bernard Weil/Toronto Star/Getty Images)

The scaffolding is finally coming down on the Canada Infrastructure Bank (CIB), the institution sketched out in the Liberals’ 2017 budget that Justin Trudeau’s cabinet has said will enable “historic investments in infrastructure.” The bank, and its pot of $35 billion, should be open for businesses by early in the new year. In November, it named its chair and its board of directors. It might even have its first customer.

In her bid to become mayor of Montreal, Valérie Plante gambled heavily by promising to build a metro line at an estimated cost of $6 billion that would connect the city’s oft-forgotten north to the downtown. Now she’s tasked with trying to drag her promised pink line from pipe dream to reality—one in which the infrastructure bank will be integral, especially when the cost inevitably rises. And she is unlikely to be the only one to see the infrastructure bank as an electoral opportunity: with municipal elections on the horizon in Vancouver and Toronto, other candidates will be enticed to make promises about the bank’s wonders. Who can turn down free money?

But the bank is still a question mark for many Ottawa watchers. Will it be an invaluable resource in coordinating government investment and getting long-shot programs off the ground? Or will it simply be a new attempt to entice elusive private money into money-losing public projects? Can it be both?

PIERRE POLLIEVRE: What is Canada’s infrastructure bank for?

Here’s what we know so far: The bank has the authority to contribute up to 50 per cent of any project’s funding, on top of other government investment; the federal government can only contribute 40 per cent for public transit plans. A government spokesperson said the share of investment “would depend on the specific circumstances of the project,” but would be “as minimal as possible.” With just $30 billion in long-term funding, the bank can’t exactly afford to build every project that comes along. The plan is actually to help “crowd in” private investment, using its money as chum to encourage private cash.

But even without businesses clamouring to become partners, Ottawa seems excited about Plante’s proposed subway, a potential flagship accomplishment that would certify the bank and Trudeau’s plans to upgrade Canada’s crumbling infrastructure.

“Mayor Plante’s vision for public transit really aligns with the vision we have,” Infrastructure Minister Amarjeet Sohi told Maclean’s the week after Plante’s victory. “Montreal, we understand, is a very congested city.”

But that city, as any Toronto commuter will tell you, isn’t the only one that’s gridlocked. What happens if every wannabe big-shot mayor proposes their own pink line? What if Toronto calls for a gondola service? What if Vancouver demands a crosstown ferry? What if Halifax asks for a city-wide blimp?

Indeed, the bank was specifically designed as a “tool” to “undertake large, transformative projects that otherwise may not happen,” Sohi says. While that sounds like good news for the blimp, he does pour some cold water on the wonkier ideas: “I don’t think any government has the kind of resources that they will see the federal government providing them any free money, because that’s not how business is done in any jurisdiction,” he says. Cities and provinces would, of course, still need to fund aspects of the plan—even if it’s just a small portion of the cost.

But Sohi also makes it clear that bankrolled projects don’t have to be profitable, per se. “The revenue doesn’t necessarily have to be paid for through a user free or through a levy,” he says of the pink line, which currently lacks a revenue plan. “It could be an uplift in the property value around the transit station.”

MORE: Amarjeet Sohi responds: What is Canada’s infrastructure bank for?

That might be a good value proposition for governments, and that’s one of the many reasons governments build public transit. But how can the bank sell that idea to investors? There’s a good reason why private industry, generally, doesn’t get into the subway-building business: there’s no money to be made. It’s not a new idea, either. Trying to shepherd private investment and corporate involvement is an evergreen government initiative—the previous government created PPP Canada to do just that.

This issue is something the C.D. Howe Institute, a non-partisan think tank, is considering. They published a 2017 report lauding the bank, but warned that Ottawa could be getting into the business of trying to sell iffy projects to corporate Canada.

“Consider two projects,” the report posits. “Project A might be a freight rail investment, while project B could be a transit line. Project B has a higher ratio of benefits to costs and so should be prioritized. However, project A is better able to attract user fee contributions, so when considering how to prioritize government spending, project A would be a better investment for the bank—it could fund five similar projects for the same cost as one of project B.”

The reality is that just because something is “transformative” doesn’t mean it has a good business case. A great social, environmental and broader economic case, sure, but the corporate world has but one master: profit.

“The case for establishing the CIB is not compelling, as it has the potential to increase overall costs to taxpayers while privatizing the most high-return, low-risk infrastructure assets,” wrote researchers from the University of Ottawa’s Institute of Fiscal Studies and Democracy in a 2017 report. They also noted governments can raise money through bonds at a far lower cost

When the chequebooks come out in 2018, these concerns may be put to rest. But there remains a distinct possibility that the bank is a more attractive political prop than it is a functional tool.