Can you run the U.S. postal service from an Ottawa mansion?

Politics Insider for May 8: The new U.S. postmaster-general is married to Trump's pick for ambassador to Canada, election speculation is back and Sidewalk Labs is dead 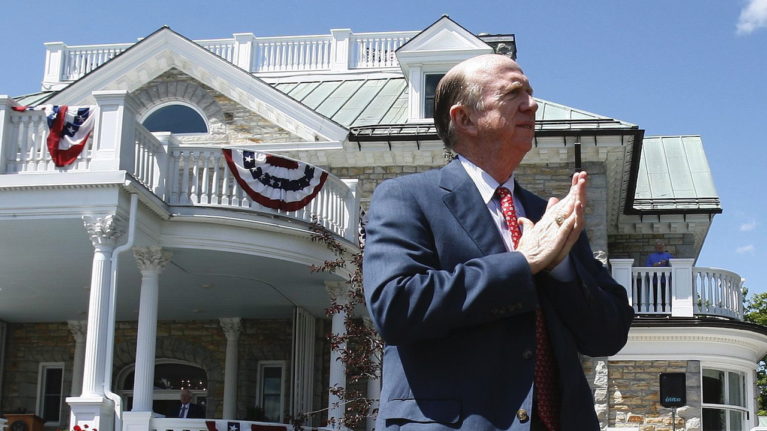 David Wilkins, former ambassador of the United States of America, gets set for the start of the 4th of July Celebrations at the Lornado residence in Ottawa on July 4, 2008. (Sean Kilpatrick/CP)

Three-billion dollars. That’s Ottawa’s contribution to a federal-provincial agreement to top-up wages of low-income essential workers across Canada. Provinces themselves will determine which workers are eligible—and contribute another $1 billion. “If you’re risking your health to keep this country moving and you’re making minimum wage, you deserve a raise,” said Justin Trudeau, who called the deal a “truly collaborative effort” as he lavished praise on the premiers. (Read the PM’s full remarks here.)

The U.S. Postal Service is now headed by Louis DeJoy, a top Republican fundraiser, who replaces Megan Brennan as postmaster-general—an Obama appointee and the first woman to hold the job. DeJoy, who takes up the role a few months before many Americans will vote for or against Donald Trump by mail-in ballot, was appointed by the USPS board of governors, not Trump himself. But it’s not exactly hostile territory. The chairman, Mike Duncan, once presided over the Republican National Committee—where he raised $428 million—and also led a lobby group for the coal industry.

Why should Canadians care about DeJoy’s new gig? His wife, Aldona Wos, is Trump’s pick as the next ambassador to Canada. America’s top envoy in Ottawa typically lives in the lavish Lornado residence in Rockcliffe Park. DeJoy’s commute to USPS HQ clocks in at a mere nine-hour drive.

Footprints of the coronavirus: Terry Glavin, writing in Maclean’s, tells the origin story of SARS-CoV-2—what we more commonly call the novel coronavirus. He traces its spread from a ‘wet market’ in Wuhan, all the way back in December, to dozens of countries all over the globe. We’re often told to listen to science as we learn more about COVID-19. So Glavin did:

The science tells its own story. It tracks the creature’s genetic footprints across the face of the earth, and its arrival and diffusion in Canada, without the aid of a teleprompter or speaking notes. The story offers no heroic role to Health Minister Patty Hajdu, and it is of no particular use to the Trudeau government’s justifications for waiting until March 18 before shuttering the international arrivals sections at most of Canada’s airports. Neither does it offer any special comfort to those among Ottawa’s critics who wanted all direct flights from China shut down weeks before that.

Canada’s privacy watchdogs have united to caution governments against breaching Canadians’ privacy rights as they develop contact-tracing apps meant to reduce the spread of COVID-19. While they expect governments not to run afoul of existing laws, the watchdogs say some of the rules in force across Canada “do not provide an effective level of protection suited to the digital environment.” The joint statement lays out nine broad principles.

Election speculation requires election speculators, and Ottawa never has those in short supply. In the National Post, witness John Ivison musing that a snap election is “not so far-fetched.” In the Toronto Star, the headline writers declare that Trudeau “wouldn’t dare call an election during a pandemic—or would he?” Susan Delacourt, the columnist beneath the headline, nails the mood in the nation’s capital: “It’s been a long two months of isolation and nothing says Canadian politics is back to normal more than a wild round of election speculation.”

Justin Trudeau is not the same. Let’s start with that hair. The PM’s beard isn’t Marie-Danielle Smith‘s concern. And don’t ask her about the days of the Justinian soul patch. No, yesterday Smith reflected on the prime ministerial pate, specifically the growing mop of hair up top—and wondered just what it says about all of us. (Don’t miss for the most stereotypically Canadian spokesflack comment of all time.)

It may be difficult for any of us to believe that February was not so long ago, and that just two months have passed since Canadian life felt in any way normal. As the days blur together, to notice the Prime Minister’s hair is to be aware of the passage of time. To feel in some way grounded. To know that we are still in the middle of the tunnel of our national nightmare.

Sidewalk Labs turns away: Google’s ambition to build a high-tech “smart city” on Toronto’s waterfront is dead. The company blamed “unprecedented economic uncertainty” for the decision. The Globe and Mail‘s Josh O’Kane penned an “obituary for a dream.”

The parliamentary budget watchdog calculated the cost of something totally unrelated to COVID-19: a Senate bill, S-209, which would mandate a gender-based analysis for government bills. The annual price tag: $350,000.