Politics Insider for Oct. 6: The feds repatriate a Syrian child of suspected Canadian ISIS fighters, Canadians are more mask-averse than Americans, and the Mounties auction off horses 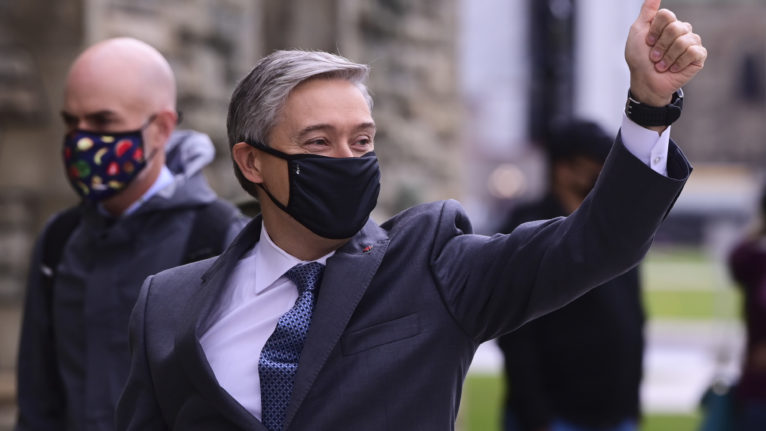 Turkey sits fourth in the world in the most recent federal report on Canadian arms exports, $151,428,455 of which were destined for Turkey last year. Amid reports that the Azerbaijani military, backed by Turkey, is using Canadian technology to commit human rights abuses in an escalating conflict with Armenia in the contested Nagorno-Karabakh region, Foreign Minister François-Philippe Champagne has “suspended the relevant export permits to Turkey.”

Champagne also celebrated the weekend repatriation of a Syrian child, a five-year-old known as Amira whose Canadian parents—suspected ISIS fighters—died last year in Syria. Amira’s uncle, Ibrahim, was represented by high-profile lawyer Lawrence Greenspon. The feds informed Greenspon of the operation on Sunday. Global News reported that Canada’s special forces were “instrumental” in getting Amira out of Syria.

And Ralph Goodale is headed to London. The lion of the Liberal Party lost his Saskatchewan seat last year and, this past March, was named special government advisor on the Flight 752 tragedy. Yesterday, Prime Minister Justin Trudeau appointed Goodale as Canada’s high commissioner in the U.K. He’ll take over for Janice Charette, a Harper-era clerk of the Privy Council.

Elizabeth May, who’s still the Green Party’s parliamentary leader, lashed out yesterday at the NDP for running a candidate in the upcoming Toronto Centre by-election, where brand-new Green leader Annamie Paul hopes to topple broadcaster-turned-Liberal Marci Ien. May cited a tradition, known as a “leader’s courtesy,” that reduces competition for new party leaders so they can gain a seat in the Commons. But typically, seat-less leaders afforded that gesture run in safe seats. Toronto Centre, a Liberal bastion, is not that. May’s seat is as safe as it gets for Greens. Elmer MacKay gave up his Nova Scotia seat to Brian Mulroney in 1983. Preston Manning gave way to Stephen Harper in 2002. May could follow that tradition, if she so chose.

To mask or not to mask? A new poll from Leger, in partnership with the Association for Canadian Studies, reveals that Americans are much likelier to wear masks outdoors than Canadians (48 per cent versus 17 per cent). Canadian respondents who identified with a visible minority were far more likely (57 per cent) than white respondents (13 per cent). Only 11 per cent of Albertans wear masks outdoors, compared to 23 per cent of Ontarians.

Trump proves narcissism is no cure for COVID-19: The president’s bout with COVID-19 mixes a dash of karma with a spell of schadenfreude, writes Andrew MacDougall in Maclean’s. And while leaders who battle serious health issues often emerge more popular—see Ronald Reagan in 1981 and Boris Johnson earlier this year—they tend to exhibit some humility in recovery. This president, not so much.

Trump can’t conceive of a universe in which he is not the centre. Just ask the poor Secret Service agents in the presidential limousine who had to expose themselves to Trump’s viral load because their narcissist boss needed a boost from the diehards gathered outside of the hospital. Quarantine? That’s for losers. Far from embracing an opportunity to change the debate around COVID-19, Trump has instead managed to do what he does to everything: make the entire situation a five-alarm sh-tshow of misinformation and argument. In this scenario, Trump and his advisers are the pathogens, not the victims of disease.

Yesterday, as his doctors insisted Trump was well on his way to a clean bill of health, the president got to his usual habit of tweeting. Trump announced his imminent discharge from hospital and implored Americans: “Don’t be afraid of COVID. Don’t let it dominate your life.” He’d earlier fired off a cavalcade of issues-based tweets—e.g. “STOCK MARKET HIGHS. VOTE!”—that offered an admittedly bizarre ranking of the importance of said issues to his base. The top three most-liked tweets appealed to the anti-abortion crowd, the “fake news” haters and whoever it is who loves Space Force.

Trudeau acknowledged yesterday that last month, when he felt a tickle in his throat, he got tested for COVID-19. The test came back negative.

This morning, watch for a new report from the Parliamentary Budget Office on the Liberals’ five-year, $900-million “Innovation Superclusters Initiative.” Earlier this year, iPolitics reported the government had doled out just a small fraction of that sum since the program’s unveiling in 2018.

The Maverick Party, a pro-Western independence party led by former Conservative cabmin Jay Hill, will target 49 super-conservative ridings in the next election. Hill told the Hill Times that his party would only contest ridings where the combined left-of-centre vote was marginal enough that none of them could sneak up the middle.

Canada’s nascent Wexit movement will face an electoral test in Saskatchewan on Oct. 26. The province’s Buffalo Party published its full platform yesterday—a list of promises that doesn’t include sovereignty. The party wants to move to an American-style election of Saskatchewan’s lieutenant-governor and judges. The party would also “take over” all taxation from the federal government.

Horse auction, anyone? The Royal Canadian Mounted Police Foundation is putting some of the force’s musically inclined equine up for sale. Felina, on auction here, is one of the dozen Musical Ride horses to be auctioned off this month. She’s described as “exceptionally friendly” and “kind,” with a “natural desire to work.” CBC News caught some of the fast-paced action from one of the 2018 auctions—which collectively raised more than $500,000.