In 2017, the Conservatives and New Democrats will work out their new champions—and it's about to get interesting 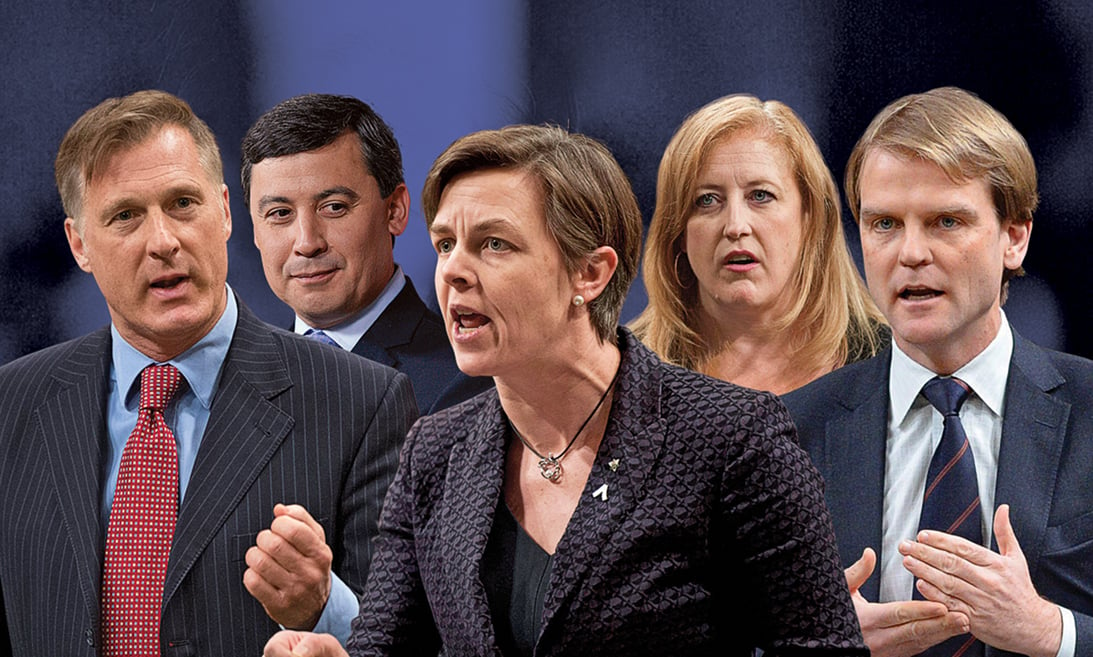 The Conservative and NDP leadership races, through to the end of 2016, were looking a bit like a bad art-house film: muddied plotlines, no recognizable names and an interminable running time.

But in 2017, these races are all but guaranteed to heat up because the two parties find themselves in quite similar and somewhat dire circumstances. Weakened in the House of Commons, drifting under extended temporary leadership and squaring off against a Liberal government that remains remarkably popular despite its missteps, both opposition parties face a crisis to define their identity and future direction.

Tim Powers, a Conservative strategist and vice-chairman of Summa Strategies, sees three possible directions for the Tory party at this early stage. The Tories could go Harper Lite with Andrew Scheer, who has a very similar agenda to the former prime minister, but a more amiable demeanour; they could opt for complete retrenchment, as represented by Kellie Leitch’s divisive hard-right proposals such as screening immigrants for “Canadian values”; or they could choose a return to progressive conservatism, as embodied by Michael Chong, who is in favour of a carbon tax, for example. “A lot of the Conservative identity over time will come more to the fore when a permanent leader is elected,” Powers says. “Though there will probably be some struggles after that permanent leader is elected, because I don’t see the dominant sort of leadership that was present with Stephen Harper.”

MORE: What to do with the candidates who should not be named

Powers argues the 2015 election was largely about tone and temperament rather than policy distinctions. But by 2019, given the Liberal government’s free-spending ways, he believes the Conservatives should refocus on “fiscal rectitude” and make the case that they will look out for voters and manage the books better. That’s a drum Maxime Bernier has been beating in his leadership campaign so far.

It would be a mistake to look for a leadership candidate who can go toe-to-toe with Trudeau in a charisma derby, Powers adds (“You’re not going to win”), and there’s no one like that in the pool of candidates anyway. But likeability and personality matter. Bernier, Raitt, Scheer and Chong tick that box nicely, in Powers’s estimation.

On the NDP front, where there are no formally declared candidates yet, Ian Capstick, a founding partner of MediaStyle and former NDP adviser, sees virtue in the party’s current basement-dwelling status. With Tom Mulcair “quite unadvisedly” staying on as leader until his successor is chosen, Capstick believes there’s an artificial downward pull on the party’s polling numbers, and a new leader will enjoy a renewal bounce that could kick-start momentum. “The New Democrats have probably never been in a worse position, and they’ve probably never had a better opportunity,” he says.

Mulcair isolated himself among loyalists and failed to connect with his caucus, Capstick argues; now the party needs a leader who listens to the rank-and-file, can demonstrate calm and appeal to voters. “At the end of the day, they have to be interesting.”

MORE: Will the NDP take a big Leap?

One of the biggest challenges for the NDP is carving out a distinct progressive niche now that the Liberals are eating their lunch on that front. “That’s something the entire party is going to have to contend with over the course of the next three years: how do you remain relevant as the social democratic party when the neo-Liberal party is viewed—wrongly, in my estimation—as being social democratic enough?” Capstick says. “Not easy.” However, he believes many of the young voters who were drawn out for the first time by Trudeau’s Liberals in 2015 are up for grabs—particularly if climate change is an important issue and they’ve been disillusioned by Ottawa’s approach and pipeline approvals.

The New Year’s resolutions of the NDP and Conservatives—to define their essential character and find a way to make that speak compellingly to voters—are very tall orders. “Both of these parties are going through these existential crises. That’s not fun. Nobody in their life wants to go through an existential crisis,” Capstick says. “Nobody in politics wants to go through one either. It’s tough, it’s emotional, it’s a lot of effort.” And that’s exactly why things are about to get interesting for Canadian political observers.