Terry Glavin: Trudeau is quick with harsh words for Putin, but when it comes to clear cases of Chinese meddling in Canada why does he stay mum? 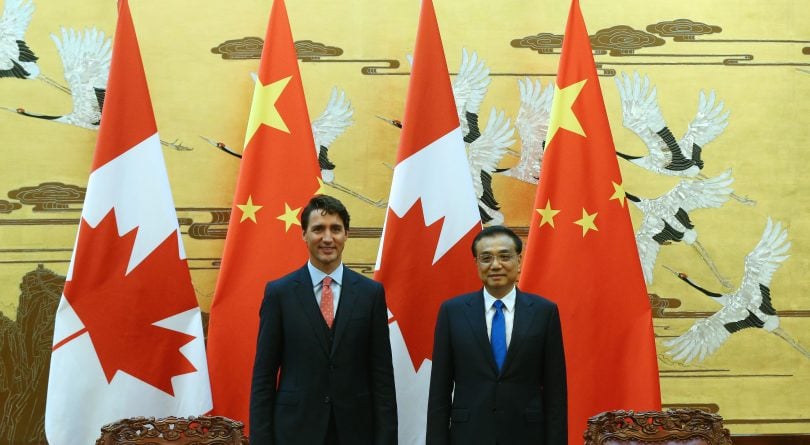 Chinese Premier Li Keqiang and Prime Minister Justin Trudeau pose after a meeting at the Great Hall of the People in Beijing, China, on Aug. 31, 2016. (Photo by Wu Hong - Pool/Getty Images)

The Kremlin is sinister and dangerous and we should watch out for its mischief during the 2019 federal elections, because this is very serious business, Prime Minister Justin Trudeau warned this week. As if we haven’t been hearing this for more than a year now, but yes, thank you, Prime Minister Trudeau. We get it. Of course it’s serious.

Just look at the mess Vladimir Putin’s cyber-hackers and social media trolls made of the 2016 U.S. presidential election. The Putin-admiring Donald Trump is still bouncing off the White House walls more than a year after the four top U.S. intelligence agencies concluded that the election campaign that Trump won had been gamed, and that the culprits were Russians.

Special Counsel Robert Mueller continues to scare the daylights out of everyone with his investigations. There have been allegations of perjury, collusion and obstruction of justice. Heads have rolled. We sure wouldn’t want that sort of thing to happen here, Trudeau told reporters in Toronto on Wednesday. Trudeau was addressing questions arising from Putin’s unsurprising landslide re-election in Russia’s own “elections” last weekend. Already in power for 18 years, Putin is now set to remain the boss until 2024.

“We have been very much focused over the past years on strengthening our democratic institutions,” Trudeau said, “… to recognize the new environment in which we will now be holding democratic elections, which often involves heavy use of social media, possible foreign interference. We need to make sure that they are kept up to date in holding off foreign meddling and interference.”

We sure do. No argument with that. But, speaking of foreign meddling and interference in Canada’s internal affairs, there was another guy who managed to get himself installed as boss of bosses for life the other day. Chinese President Xi Jinping, General Secretary of the Communist Party, Chairman of the Central Military Commission, Core Leader, Helmsman, and a bunch of other even wordier titles. The terms limits were torn up and Xi will now be running the Chinese police state for as long as he wants.

READ MORE: Why Canadians need to start worrying about China

While Trudeau was talking tough about Vladimir Putin on Wednesday, there was an announcement from Beijing about measures aimed at strengthening Xi’s capacity to influence events in China and overseas.

It was the United Front Work Department that boasted in a document unearthed by a Financial Times investigation last October that 10 Beijing-friendly politicians in Canada had been elected to office in 2006 alone. In 2010, Richard Fadden, who was then director of the Canadian Security Intelligence Agency, was upbraided for merely pointing out that several Canadian politicians in Canada were Beijing-friendly to the point that they had fallen under “at least the general influence of a foreign government.”

Trudeau’s remarks about Putin this week are reported to have been some of his harshest language yet. Maybe. “President Putin needs to start showing by his actions that he wants to play a positive role in the international community,” said Trudeau, who went on to cite Putin’s war in the Donbass region of Ukraine, his annexation of Crimea, his threats to NATO members in the Baltics, “questions around Syria, questions around the Arctic,” and of course the recent poisoning by nerve agent of the former Russian spy Sergei Skripal his daughter Yulia in the English town of Salisbury.

You could say that’s tough talk, but during the 2015 federal election campaign Trudeau said Putin was “dangerous” in Eastern Europe and “unduly provocative” in the Arctic and Canada needed to “stand strongly with the international community pushing back against the bully that is Vladimir Putin.” Then there was this, from January last year. “I think I could probably take him. Besides, I’ve been told I can throw a pretty mean elbow.”

Here’s the thing. Have you ever heard Trudeau speaking about Xi Jinping in this way? Of course you haven’t. It’s all the finest etiquette and table manners whenever one of Beijing’s consiglieri comes to Ottawa for the usual connivings with the China lobby, the senior trade bureaucrats and the current and former pro-Beijing Liberal politicians who form up the tightest circle of power around Trudeau’s government.

Try to imagine how it would have looked if Donald Trump had appointed the president of the America-Russia Business Council to head up his transition team into the White House after the 2016 American presidential election. Well, that wouldn’t feel right, you might say. Meet Peter Harder, former president of the Canada-China Business Council, appointed by Trudeau to head up his transition team after the 2015 federal election. For his trouble, Harder was later appointed to the Senate, where he serves as the Trudeau government’s representative.

The Xi regime hasn’t annexed Crimea, true enough. Xi has annexed the South China Sea instead. Beijing is not occupying Donbass. Beijing is occupying Tibet instead. Xi hasn’t invaded the Republic of Georgia, but he has threatened to obliterate little Taiwan, which he refuses to recognize as an independent country. Xi has run as many as 800,000 Muslim Uighurs through re-education camps in Xinjiang. He’s crushed every hope of democratic reform. He doesn’t pretend about anything—give him that. He intends to overthrow the world order Trudeau claims to believe in. He makes no secret of it.

Say what you like about Putin and his gangsters and their sleazy monkeywrenching of elections at home and abroad, it wasn’t the Kremlin that hacked into the National Research Council in Ottawa in 2014, destroying its mainframe, scooping up enormous volumes of private data and doing hundreds of millions of dollars in damage. That wasn’t a Russian job. It was a Chinese job. And they got away with it.

It hasn’t mattered that Huawei Technologies was heavily subsidized to set up shop in Canada even though it’s the world’s largest telecommunications equipment manufacturer and it was founded by a Peoples Liberation Army engineer. It hasn’t mattered that in recent days, the FBI, the CIA, the National Security Agency and the Defence Intelligence Agency have told the U.S. Senate that Huawei phones could be used to spy on their owners, so people should stay away from them.

There was Ralph Goodale on Monday, saying no, Huawei would not be blocked from doing its business in Canada, precautions have been taken to protect Canadians from foreign spies, no problem. Move along.

In Trudeau’s Ottawa, you’d think China was just another country, something like, say, the United States, only more glamorous, and with pandas. But here’s David Mulroney, Canada’s former ambassador to China: “Where China differs is its willingness to use diaspora groups, people who have an economic stake in China, to work behind the scenes. That’s a form of interference in Canadian affairs.”

Here’s Charles Burton, former diplomat in China, associate professor of political science at Brock University: “China is already aggressively rallying support from pro-mainland ethnic Chinese in Canada, as well as China-friendly business lobbyists and politicians, through its United Front Work Department initiatives in Canada. If the political consensus in Canada is not to comply, expect China to retaliate.”

Mike Pompeo, head of the CIA, told the BBC earlier this year that when it comes to the subversion of democratic institutions, China is every bit the threat that Russia is, with one main difference: “The Chinese have a much bigger footprint upon which to execute that mission than the Russians do.”

Sigmar Gabriel, the just-resigned German vice-chancellor and foreign minister, recently told Der Spiegel magazine that as the United States has imploded as a world power, Europe is getting caught in the backdraft, and China has moved in so aggressively that “a few EU member states no longer dare to make decisions that run counter to Chinese interests. You see it everywhere: China is the only country in the world that has a real geopolitical strategy.”

This is not to say that Trudeau’s Liberals are so naive that they don’t know that this is happening here, nor is it to say that the Liberal establishment doesn’t even care. Just as likely, Beijing doesn’t do all that much in the way of subterfuge in Canada at all, because the regime is confident that the Trudeau government will already do everything it can get away with, in the cause of getting Beijing everything Beijing wants.