Chrystia Freeland explains the world for you

Freeland's speech suggested a Trudeau government policy of depending less on the United States than we did before, but it was lacking in specifics 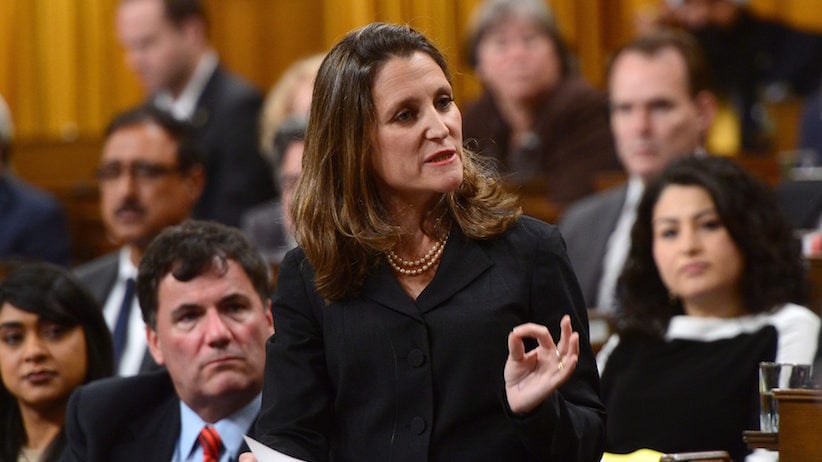 Minister of Foreign Affairs Chrystia Freeland delivers a speech in the House of Commons on Canada’s Foreign Policy in Ottawa on Tuesday, June 6, 2017. The Canadian Press/Sean Kilpatrick

“Mr. Speaker, here is a question,” Chrystia Freeland told the House of Commons on Tuesday morning, launching what was advertised as a major state-of-the-foreign-policy speech. “Is Canada an essential country, at this time in the life of our planet?”

It’s surprising how easy it is to elevate a speech in the House of Commons above the ordinary. Life there is mostly one big Chapters/Indigo ad, where almost nobody gets into trouble for declaring yet! again! that, yes, The World Needs More Canada. For Freeland, the foreign minister, to even suggest Canada might be considered less than essential—by anyone—suggests she was in a mood to challenge the conventional wisdom.

Not that the mood lasted long. “Most of us would agree” that Canada sure is essential, she said immediately. And yet: If you say Canada is essential, you are “called to explain why.” And to “consider the specifics” of “what we must do as a consequence.”

It isn’t every year that Canada’s foreign minister delivers a general speech on policy to the House of Commons. In fact, as far back as I can recall, it hasn’t been any year. The reason for breaking precedent this year isn’t only that Freeland, who has written books, fancies the big picture. It’s that the big picture is undeniably changing in ways that cry out for attempts to describe the new context. “International relationships that had seemed immutable for 70 years are being called into question,” as Freeland put it. “Long-standing pacts”—Hello, NAFTA and NATO—”are being tested.”

The lesson? “Turning aside from our responsibilities is not an option,” the minister said.

Here, and throughout her speech, she was rebutting the notion that in a safe and relatively isolated country like Canada, foreign policy is mere luxury. “You could easily imagine a Canadian view that says, ‘We are safe on our continent, and we have things to do at home, so let’s turn inward,’ ” Freeland said. “‘Let’s say Canada first.’ ”

In fact not a lot of people ever say that. The isolationist strain has long been weaker in Canadian politics than in the U.S. The Harper government was in many ways almost as much of a global joiner as its Liberal predecessors and successor. And among Canadians who spend a lot of time debating foreign policy—a highly self-selecting bunch—it’s simply not the done thing to inquire whether Canada is needed in most of the big fights.

The closest recent example I’ve seen comes from an article Ian Brodie, Stephen Harper’s former chief of staff, published in 2014, when the Conservatives were still in power. Brodie offered a bracingly limited list of Canadian vital interests: basically, NORAD, NATO, fisheries and softwood lumber. “Otherwise, Canadian governments are free to pick when and where to engage internationally. These efforts are rarely essential to our national security,” Brodie wrote, “and thus rarely generate domestic political debate.”

I have a lot of sympathy for Brodie’s argument, which isn’t that Canada should ignore the world, but that Canada has the rare luxury of picking its fights. Knowing this helps governments resist the urge to pick them all.

Freeland’s was a bit of a pick-’em-all speech. “We do face clear challenges,” she said. “Climate change” was the first. “Civil war, poverty, drought and natural disasters anywhere in the world,” largely because they “spawn globally destabilizing mass migrations.” Which is sometimes true. “North Korea.” “Syria.” “The monstrous extremists of Daesh,” the so-called Islamic State. And “Russian military adventurism.”

That’s a fairly extensive list of clear challenges, especially if one were to take the “anywhere in the world” part literally. How can distant Canada with its limited means make a difference? “Co-operation with like-minded countries.” How can Canada ensure that remains possible? By supporting “an international order based on rules.” Which rules? The “single most important” is “the sanctity of borders.” Which is why Canada, now under two successive prime ministers, has opposed the Russian invasion of Ukraine, she said.

Daesh, or the Islamic State, also challenges territorial integrity because both the terrorists and their victims ignore borders.

Less spectacularly, Freeland named two broader challenges to the international order: the “rapid emergence of the global South and Asia—most prominently, China”—and a “crisis of confidence” in the West, a “pervasive sense that too many people have been left behind.”

READ MORE: Canada to be ‘tough and strong’ with U.S. on trade, says Freeland

Here, Freeland was getting to the meat of her argument. The “crisis of confidence” is, of course, her shorthand for the rise of Donald Trump, the Brexit vote and the late-inning challenges to the CETA trade deal with Europe. The rise-of-China (and the rest of Asia, and Africa) stuff suggests there are available replacement societies of the future if the United States should fall.

“Let me pause here and address the United States, directly,” Freeland said. It’s been such a good nation, she said in effect, but “many of the voters in last year’s presidential election cast their ballots, animated in part by a desire to shrug off the burden of world leadership.”

Well then. Freeland’s next line might have been the most significant in the speech. “The fact that our friend and ally has come to question the very worth of its mantle of global leadership, puts into sharper focus the need for the rest of us to set our own clear and sovereign course.”

That would be headline news anywhere in the world—Canada setting a “clear and sovereign course” away from the United States—if Freeland hadn’t taken care to couch it in milder language. So on climate change, the latest area of disagreement with the Trump White House, Canada “will continue to seek opportunities for constructive progress … wherever we can find them,” whether that be “in Washington” or “at all levels of government”—states and cities, that is—”and with partners in business, labour and civil society.”

On any other issues, Canada will keep “open hearts extended to our American friends.” So while the “sovereign course” line might have sounded like a divorce announcement, the rest of the passage made it clear Freeland envisages something more like separate vacations.

So does the line mean nothing at all? Not quite. It suggests a Trudeau government policy of diversifying Canadian relationships, rather than depending as heavily on the United States as before. “We will strongly support multilateral forums,” Freeland said, listing 10 in a single sentence.

There’ll be a renewed emphasis on “feminism and the promotion of the rights of women and girls,” including “the right to safe and accessible abortions.” We’ll learn more when development minister Marie-Claude Bibeau releases “Canada’s first feminist international assistance policy, which will target women’s rights and gender equality.”

And Canada will make “the necessary investments in our military,” as Defence Minister Harjit Sajjan will explain on Wednesday. Note here that this was cast, not as an attempt to please the fickle tenant of the White House, but as a plan to enhance Canada’s ability to act without him.

Finally, she said, “we are a trading nation.” This will include stronger efforts “to diversify Canadian trade” worldwide,” i.e. outside the U.S.

It was really only in the section on Canada-U.S. relations—or rather, on Canada-not-necessarily-with-the-U.S. relations—that Freeland got into details of substance. It’s certainly true that a multilateralist, feminist, free-trading Canada will be only partially compatible with any plan Donald Trump is cooking up. But the degree of any divergence, it seems, will be improvised case by case.

It’s clear that Justin Trudeau’s policy of staying as close to Trump as possible is increasingly strained. I think you can look forward to stories and columns reading a major break with the U.S. into Freeland’s remarks. That flatters the speech, which was altogether more cautious.

It’ll be interesting to see whether Freeland makes these big speeches a regular event. In Poland, as I’ve noted before, foreign ministers make an annual foreign-policy speech, almost the equivalent of a finance minister’s budget speech. If she makes these things a habit, Freeland will want to try to make them more of an event.

Almost no diplomats were in the public galleries while she spoke. That should be easy to fix: invite more. And even some of Freeland’s own Liberal caucus colleagues were listless as she spoke. They forgot to applaud anything until well into her speech. This is in the grandest tradition of Canadian foreign-policy debates, which are always more riveting in hindsight than at the time. As Lester Pearson wrote in his memoir about what’s usually seen as a golden era of postwar Canadian diplomatic wizardry:

“Unfortunately, debates on foreign policy in Parliament more often than not were lifeless and dull … On these occasions the House of Commons was usually reduced to thirty or forty members, many of them transparently bored, while the members of the Press Gallery were usually conspicuous by their almost total absence. A principal reason for this general indifference … was no doubt the non-controversial nature of so much of our foreign policy in those early postwar years.”

One way to avoid such a fate is to ensure that future foreign-policy keynotes, if there are any, are more controversial. On any question of detail, whether implied or put to Freeland after her speech by her opposition critics, she deferred to her colleagues: Sajjan on defence spending, Bibeau on development assistance, Ralph Goodale on national security. Well, how fun is that? Principles are good, but we learn whether they really matter when they are strained, tested, or put into conflict with one another, as indeed Freeland believes they are today. With what specific results? What decisions are she and her colleagues forced to make?

If Bill Morneau gave an annual speech reminding everyone that it’s important to spend wisely, and left the specifics to his colleagues, we’d stop covering the finance minister pretty fast. News is made when the rubber hits the road. More specifics next time, please.