Chrystia Freeland's big announcement wasn't so big after all 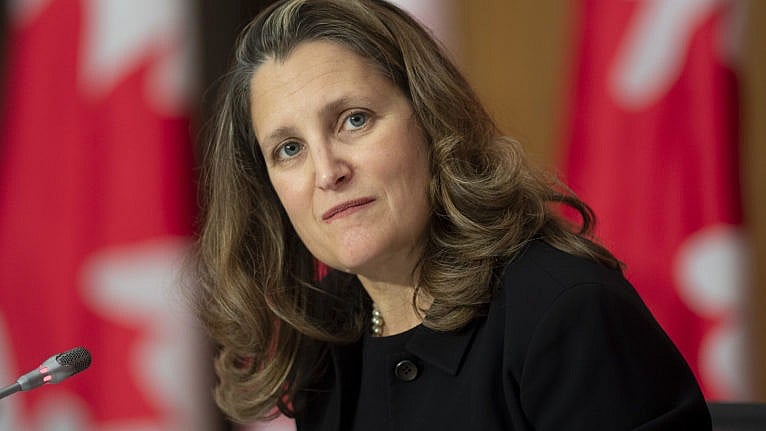 Deputy Prime Minister and Minister of Finance Chrystia Freeland is seen during a news conference on Oct. 20, 2020 in Ottawa. (Adrian Wyld/CP)

Bank of Canada governor Tiff Macklem yesterday predicted a winter of “slow and choppy” economic recovery. Macklem’s latest monetary report wasn’t all gloom and doom, but the central bank thinks Canada’s economy, on pace to shrink by 5.7 per cent this year and grow by an average of 4 per cent over the next two years, will “still be operating below its potential into 2023.” If a thick report isn’t your cup of tea, the bank made a handy video to explain itself.

Shortly after Macklem’s news, Finance Minister Chrystia Freeland delivered a virtual keynote at the Toronto Global Forum, where organizers had billed her speech as including “an announcement of national significance.” As it happened, Freeland’s address offered nothing juicy—say, a new fiscal anchor—but did rehash the broad themes of last month’s Throne Speech.

The FinMin attempted a thread-needling on the Liberals’ stewardship of the nation’s finances. “Our fiscally expansive approach to fighting the coronavirus cannot and will not be infinite,” she said. “It is limited and temporary.” And she had more: “Whether on Bay Street or Main Street, there are no blank cheques, and there are no free lunches.” Is that assurance enough for deficit hawks? Did Freeland strike the right balance?

Seven Conservative MPs voted against the Liberal bill that cracks down on conversion therapy. They were vastly outnumbered by the 308 MPs who voted for the bill at second reading. On to the justice committee goes C-6.

Rest in peace: The Commons held a moment of silence for Don Mazankowski, a 25-year MP and Tory cabinet minister who served as deputy PM for seven years. Calgary Centre MP Greg McLean paid tribute to Mazankowski: “His example still serves as a model for all of us that choose to serve in public life.” He was 85 years old.

The Canadian Armed Forces can’t seem to get a handle on sexual misconduct in its ranks. DND’s newest effort, “The Path to Dignity and Respect,” follows decades of failure. In 1998, a Maclean’s cover story revealed the depth of the problem to Canadians. The military established a sensitivity program and reporting hotline—responses that were understaffed and “did not have the enduring impact expected.” In 2014, Maclean’s and L’actualité partnered on another investigation that forced the military to try again with OP Honour, another effort to get rid of sexual misconduct. A 2018 auditor general report and DND’s own internal analyses concluded “there remained much left to be done.” Now comes the new strategy, which aims for a “comprehensive and sustained institutional approach” that will change “those aspects of CAF culture that were contributing to a permissive environment.”

Robots on the battlefield: As part of the Innovation for Defence Excellence and Security program—aka IDEaS—DND is hoping autonomous vehicles are the key to “reducing the number of human operators that are needed to transport supplies, while still ensuring the same volume of supplies are delivered.” When real people deliver supplies, they’re often targeted by hostile forces and, of course, require rest. DND wants to make use of what it’s already got, by “retrofitting existing vehicles with driverless technologies.”

Remember Anonymous, the senior Trump administration official who wrote a New York Times op-ed in 2018? The official whose use of the word lodestar spawned theories that the writer was actually Vice-President Mike Pence? Well, Anonymous came out of the shadows. His name is Miles Taylor, who was once chief of staff to former Homeland Security secretary Kirstjen Nielsen. Taylor explained himself. Mystery solved.

The mile-high hub: The eagle eyes of a National Post reporter appear to have caught Tory MP Tom Lukiwski voting from an airplane lavatory.