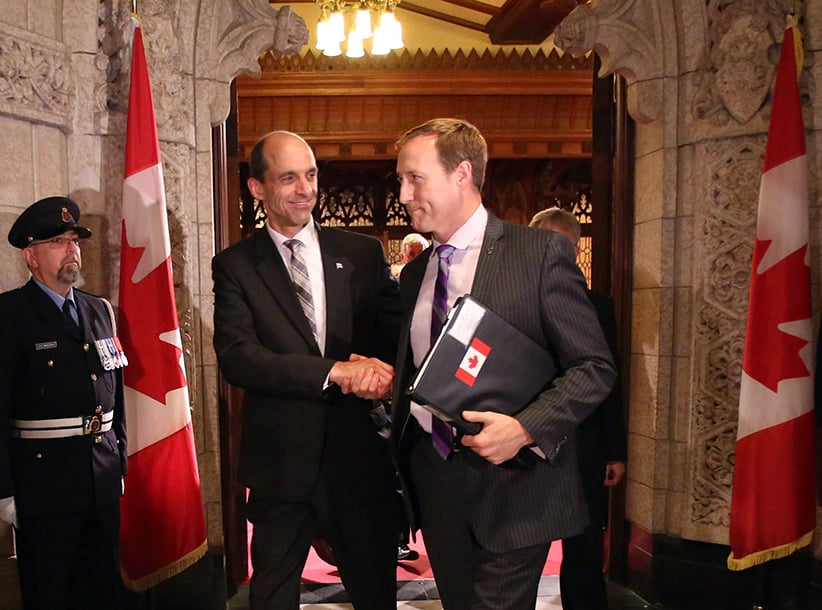 The president of the National Firearms Association says the Conservative government offered to make changes to its gun licensing bill if the NFA held its fire on the controversial bill C-51, then reneged on the agreement.

Sheldon Clare, who is running as an Independent candidate in British Columbia’s Cariboo–Prince George riding, posted the details of the alleged arrangement to quell dissent about C-51 on his Facebook page Monday. Clare said the NFA’s opposition to C-51, which became law in June, was well known, and that there were “great legal minds” already arguing for changes. But the organization also decided to cancel its committee appearance to discuss C-51 because the government offered to make changes to C-42, another bill that worried the NFA.

A lawyer for the NFA had been scheduled to appear before the House public safety committee last March, along with Open Media, another opponent of the bill. C-51 gave sweeping police powers to Canada’s intelligence agencies and offers no corresponding increase in oversight, raising the ire of privacy advocates.

At the time, no one from the NFA—including Clare—would say why the group cancelled, leaving Open Media scrambling to find a replacement. Open Media, which tends to be embraced by the left, wanted to show the breadth of opposition to C-51 by appearing with a more right-leaning witness. Open Media’s Steve Anderson eventually appeared along with Connie Fournier, who founded the Free Dominion website, which describes itself as a forum for the discussion of conservative philosophy and activism​.

But Clare is now going public about the backroom deal. 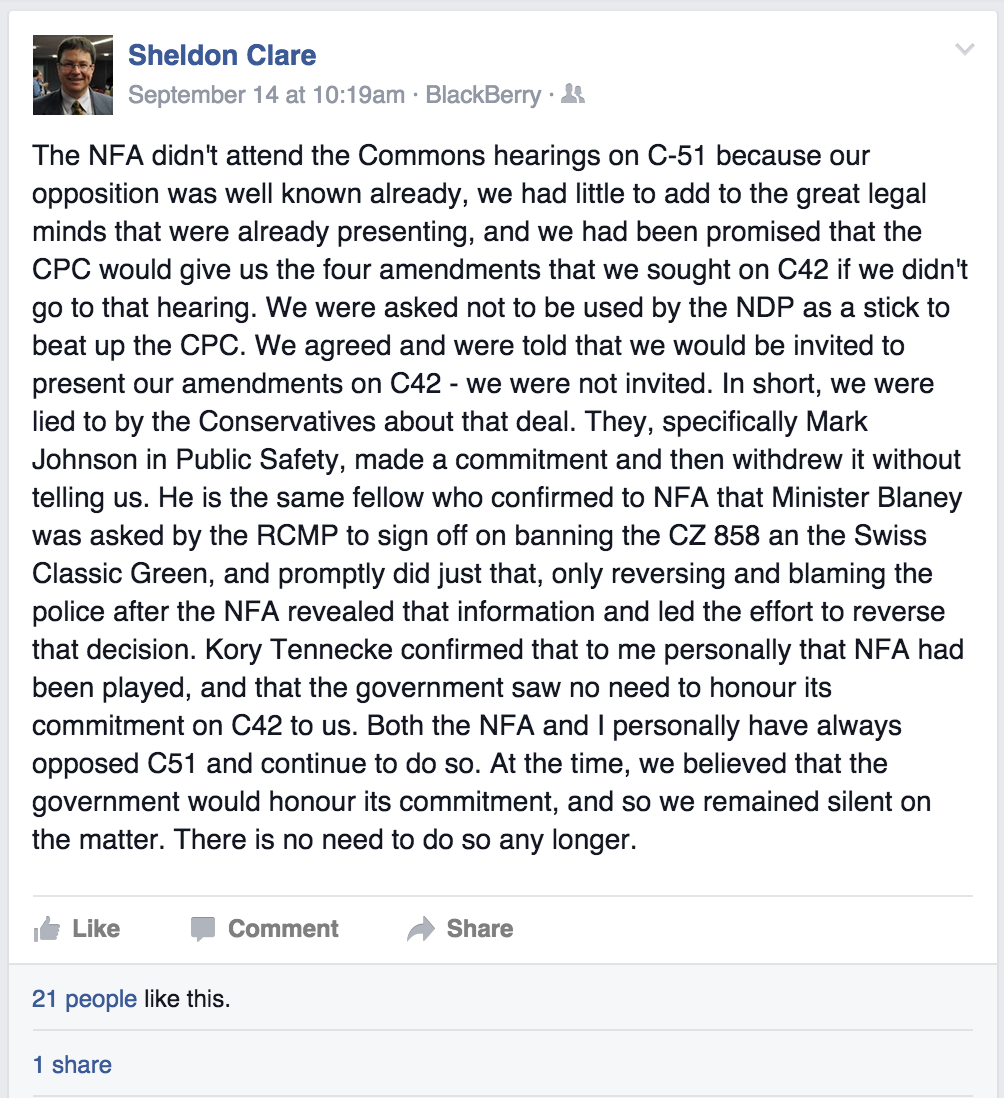 “We had been promised that the CPC would give us the four amendments that we sought on C-42 [a bill making changes to firearms licensing] if we didn’t go to that hearing. We were asked not to be used by the NDP as a stick to beat up the CPC,” he wrote on Facebook.

The NFA agreed, Clare wrote, but soon felt betrayed when the Conservatives didn’t invite the organization to present its amendments on C-42, which streamlined gun licensing and provided a six-month grace period for lapsed licenses. C-42 also brought in mandatory gun prohibitions for violent offenders and domestic assaults.

“In short, we were lied to by the Conservatives about that deal,” Clare wrote, naming Mark Johnson, the director of parliamentary affairs in Public Safety Minister Steven Blaney’s office.

Clare says Kory Teneycke, the party spokesman travelling with Conservative Leader Stephen Harper, confirmed to him personally that the “NFA had been played, and that the government saw no need to honour its commitment on C-42 to us.”

“Both the NFA and I personally have always opposed C-51 and continue to do so. At the time, we believed that the government would honour its commitment, and so we remained silent on the matter. There is no need to do so any longer.”

“Our Conservative government stands by its legislative track record — including laws supporting law-abiding firearms owners,” Lecce wrote in an email.

One of the irritants tackled in C-42 moved gun classification decisions to cabinet from the RCMP. The Mounties had caused a commotion in the gun community by reclassifying the Swiss Arms Classic Green rifle as a prohibited weapon.

Clare wrote in the same Facebook posting that Johnson, in Blaney’s office, confirmed to him that the public safety minister signed off on the reclassification, “only reversing and blaming the police after the NFA revealed that information and led the effort to reverse that decision.”

Johnson and Teneycke did not immediately respond to requests for comment.

Clare’s leadership of the NFA was challenged last February, with several of the NFA’s provincial directors voting to remove him as president. Clare and several other members of the board weren’t present at the meeting, which seemed to stem from the firing of executive vice-president Shawn Bevins. Bevins has since joined a rival organization, the Canadian Coalition for Firearm Rights.