Paul Wells: There were layers of chaos in Ottawa as a handful of MPs hurried to pass a coronavirus support bill. And this crisis is just getting started. 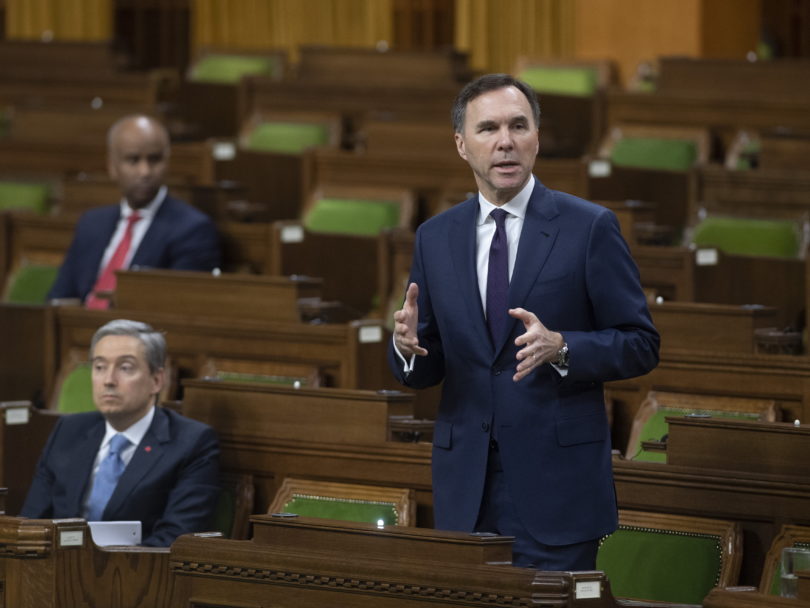 Morneau responds to a question after tabling the governments COVID-19 financial measures bill in the House of Commons on March 25, 2020 (CP/Adrian Wyld)

Allow me to quote from my trusty and freshly towelette-sanitized Big Book of Columnists’ Clichés. “No one pretends that democracy is perfect or all-wise,” Winston Churchill said in 1947. “Indeed it has been said that democracy is the worst form of Government—except for all those other forms that have been tried from time to time.”

Ah, Churchill. So wise. But even that greatest friend of every pundit who was ever hard up for a lede would have admitted that parliamentary democracy, the least-worst form of Government, sometimes does its best to out-worst the other forms.

And so, as if on cue, Canada’s Parliament returned to an Ottawa grown silent with quarantine. Or part of it did. Several Senators moved into the temporary Senate in an old rail station across from the Château Laurier, and a selection of MPs into the temporary House of Commons in the courtyard of the West Block. (Even our Houses of Parliament are practicing social distancing.) For the first time in memory, only a bare minimum of MPs were asked to show up: 14 Liberals, 11 Conservatives, 3 Bloc Québécois members, 3 from the NDP, and one Green. It was like in 1950 when Count Basie gave up trying to support a big band and made do with an octet for a few years.

You would think the smaller ensemble would play together more cohesively. You would especially think this if you had not attended a standard-issue Commons committee meeting. Around here, chaos poured into smaller packages tends to concentrate.

The chaos this time was two layers deep. The first layer was courtesy of the Liberals, whose House leader Pablo Rodriguez negotiated with the opposition parties at great length on the content of the Coronavirus financial support bill—before producing a draft with sections none of them had discussed. The bills would have given “the Minister of Finance” broad unilateral authority to spend, borrow and tax until the end of 2021, without seeking the approval of Parliament.

READ MORE: Yes, this is a war. Do our leaders know what that means?

(I put “the Minister of Finance” in scare quotes in that sentence because the current Minister is Bill Morneau. But we learned from the Ethics Commissioner’s report on the SNC-Lavalin affair that Morneau had no recollection of meetings and emails on momentous topics, meetings and emails that led to substantial subsequent work by members of his office and the offices of other ministers. So in Canada these days, “the Minister of Finance” seems to be less a person than a procedural shorthand for a complex and mysterious process, as is “the Crown” or “whoever’s making programming decisions at the CBC.”)

Anyway, the State of Morneau stuff turned out to be a bit of a false alarm. In the face of instant uproar from the main opposition parties and every pundit still on Twitter, the Trudeau government backed down—first on unilateral taxing power, then on the rest. The Commons passed the bill long after midnight, the Senate after the sun came back up on Wednesday. At 3:28 a.m., between the two votes, reporters received a triumphant communiqué from the Conservatives detailing all the ways the Liberals had climbed down. There were a lot of them.

What on earth got into the Liberals’ heads? Mostly what was already there. First, the firm belief that no decision a Liberal makes is ever partisan, that only opposition to Liberals is partisan. Second, deep impatience with Parliament, a hallmark of Justin Trudeau’s time in government. (Remember when he got up from his chair to push people around because things were taking too long?)

Caught overreaching, the Prime Minister did what he always does when he is caught overreaching: he turned his shaky judgment into everyone else’s moral lesson. “When you’re trying to help get money out to people, speed is of the essence, especially in an unprecedented situation like this one,” he said on Tuesday by way of half-explanation. “But I want to make it very clear: I believe in our democratic institutions.” Having just been rather loudly reminded of their existence, I suppose he’d better.

“All of us in parliament must work together,” he said, belatedly, “and Canadians need to see us doing just that. So, you have my unwavering commitment. We will protect and uphold democratic values. We will protect and uphold democratic institutions as we deliver support to Canadians as quickly as possible.” “Unwavering” was a nice choice of words. Dude, you just wavered.

As fun as it is, I’m not sure dunking on Trudeau provides a complete explanation for the government’s behaviour. The second layer of chaos was provided by Lanark—Frontenac—Kingston MP Scott Reid, who, if I were to write about him in the prose style of Lanark—Frontenac—Kingston MP Scott Reid, I would say played the role of a constitutional Banquo’s ghost at everyone else’s banquet.

Reid posted a couple thousand words on his website explaining why he was even in the Commons, given that his own whip’s office had told him not to show up. Nobody had a part for him to play in this Count Basie Octet Parliament, but he believed nobody else—including none of his Conservative colleagues—was interested in playing the basic roles of parliamentarians, including reading bills before passing them.

In this, Reid had the evidence of the last sitting day before Parliament rose a couple of weeks ago, when MPs passed three spending bills without looking them over. Sure, everyone’s terrified of a global pandemic. But “panic is never, ever, an excuse to override our ancient political conventions,” Reid wrote. “These conventions are the oldest and best protections that exist for our political liberties.”

Here Reid was reminding everyone why, for such a softspoken and thoughtful guy, he exasperates so many colleagues. He has a knack for being inconvenient. Here was his leader, Andrew Scheer, complaining about the “government’s attempted undemocratic power grab.” And here was Reid complaining that Scheer and the Conservative parliamentary leadership had already colluded in an undemocratic power grab—grabbing power from their own MPs—and were learning to like it. “Sauce for the goose” is almost never a welcome argument in Ottawa.

The other reason why governments are tempted to play fast and loose with the rules is that they face a crisis on a scale almost beyond comprehension. The scale of the response is similarly unprecedented, everywhere. France’s cabinet this morning passed 25 decrees on everything from financial support to the number of hours in a work week—the largest number of government decrees on a single day since the Algerian War of Independence in 1958. Governments everywhere are throwing money none of them have at this thing.

And if there’s a theme in leaders’ comments this week, in crisis news briefings around the world, it’s that these are still the early days of the crisis. “It’s a long effort we’ll have to face together,” France’s Prime Minister Edouard Philippe said this morning. “We’re only at the beginning.”  In Washington, Gen. Mark Milley, the Chairman of the Joint Chiefs of Staff, said, “You’re looking at late May, June, something in that range” for an exit from the state of emergency. “Maybe, it could be as late as July.”

Are governments going to get things wrong in a context like this? Oh, absolutely. Have already, will some more. Everybody’s improvising. But the chances of getting it wrong diminish if many eyes check the homework. They don’t increase. Something that remains true even when it’s inconvenient.