Maclean's is your destination for the 2015 election. Start with our in-depth primers on the big issues, including crime

Crime rates have been dropping steadily in Canada for two decades. Conservative insistence on the need for tougher sentences for a raft of offences has continued unabated. And it’s not just rhetoric: According to a 2013 report from the Parliamentary Budget Office, spending on criminal justice as a percentage of GDP was trending downward until 2006, when the Conservative Party was first elected, but, since then, has increased both in real terms and as a share of the total Canadian economy.

So far, only the Conservatives have had much to say on the issue of crime and punishment, and the other parties have reacted to the government’s agenda, which the Tories have maintained as a central focus. The real opposition has come from the bench. The Supreme Court has struck down the government’s mandatory-minimum-sentence law for illegal firearms possession, for credit for time served in custody before limiting inmates’ to trial, and restrictions on eligibility for parole.

Conservative:  The party has long pursued a law-and-order agenda. It has introduced several pieces of legislation to further the tough-on-crime approach, including mandatory-minimum sentences for gun crimes, capping the credit an offender could receive for time served in pretrial custody, and repealing early parole, which were all either scrapped or softened by the Supreme Court of Canada. Conservatives also created a federal ombudsman for victims of crime and raised the age of consent to 16 from 14.

—Spend another $4.5 million on RCMP crackdowns on grow-ops and meth labs

—Launch a hotline for parents concerned about drugs

—Set two-year mandatory minimum for fraud over $5,000 with multiple victims

NDP:  They’ve been critical of the tough-on-crime agenda, particularly the increasing expenditure on the criminal justice system, and have called for both an increase in restorative justice, as well as tougher sentences for violent crimes.

Liberal:  They’ve supported mandatory minimums for “serious and violent offences only,” but their platform doesn’t yet address crime or incarceration directly, apart from the issue of marijuana legalization. Trudeau has called for an “evidence-based” approach to laws governing marijuana and prostitution.

Green:  They’ve opposed the government’s tough-on-crime legislation. The party suggests introducing an independent law-reform commission that would report to Parliament on proposed changes to the Criminal Code, and create a forum for public discussion of contentious legal issues  such as assisted suicide, sex-trade workers and “more realistic anti-drug policies, including the legalization and regulation of marijuana.” 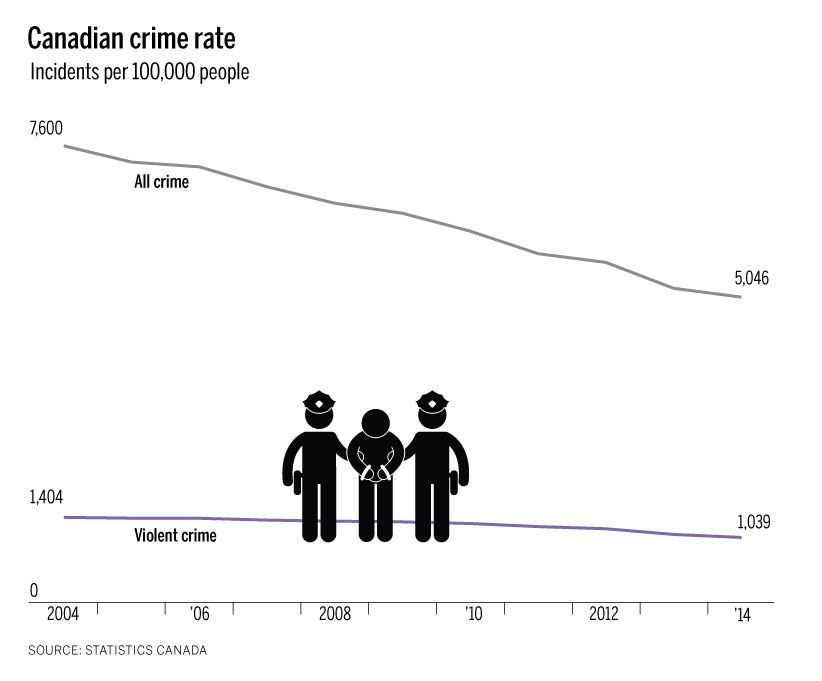 “Voters should consider two things: Are we taking the smartest approach to crime? The U.S. is moving away from mandatory minimum sentences and a reliance on imprisonment, just as Canada is embracing both. Will this get us value for money? Second: Do voters care about the unequal distribution of crime in our communities, in which Aboriginal women are grossly overrepresented among crime victims, and Aboriginal women, men and youth are severely overrepresented among prisoners? Are voters content with this status quo? Which party has the best criminal justice strategy for the future?”
—Kent Roach, University of Toronto law professor

“Probably the most important fact to keep in mind about crime and the criminal justice system is that changes of the kind that are plausible in Canada, like increases in punishments, will not affect crime itself. Second, crime is largely controlled by social policies like health, education, welfare and employment. Third, imprisonment is necessary in some circumstances but the experience of spending time in prison is, if anything, likely to increase reoffending. In addition, of course, the direct costs of imprisonment are dramatically more than the costs of punishing a person in the community.”
—Anthony Doob, University of Toronto professor emeritus of criminology

“Our criminal laws are becoming increasingly punitive and redundant. Do we want laws that punish people for symbolic reasons or use the best insights of the social sciences to guide our policies? Do we want to deal with the links between crime and inequality? These are the defining questions that we need to consider, and to look at what each of the parties is saying on these issues.”
—Vanessa MacDonnell, University of Ottawa law professor