Maclean's is your destination for the 2015 election. Start with our in-depth primers on the big issues, including defence spending

Few governments are credited with adequately funding Canada’s men and women in uniform, and fewer still are able to equip the troops without blowing timelines or budgets. Liberals and Tories have both cut and boosted spending as dictated by economic hard times. The former exacted deep cuts in the 1990s, and the latter chopped military spending as the government wrestled with austerity. Canada’s fleet of Sea King helicopters, dismissed as “aging” for three decades, represent a long-term inability to buy new equipment free of hassle.

Like other foreign policy files, defence issues can often help a serving prime minister. Something about acting on the world stage—especially when troops are involved—tends to make a serving PM stand apart from his opposition rivals. Justin Trudeau undermined his own bid to be taken seriously on military matters when, just after his first major speech on the Islamic State threat last fall, he made a joke many considered juvenile. “Why aren’t we talking more about the kind of humanitarian aid that Canada can and must be engaged in,” Trudeau said, “rather than, you know, trying to whip out our CF-18s and show them how big they are?”

Conservative:  While they claim defence spending has increased under Harper, that’s only true until the figures are adjusted for inflation. Budget 2015 earmarked another $11.8 billion in spending over 10 years, but that money doesn’t begin flowing until 2017. Procurement headaches remain a Tory vulnerability. For instance, Conservative ministers recently announced that a U.S. company won two contracts totalling $843 million to supply 1,500 army trucks and related gear—but this is the third time the government has tried to get the project to buy these badly needed military vehicles up and running.

—Establish a reserve unit in Yukon

NDP: Their basic policy on defence spending supports a Canadian Forces that is “well-equipped with the necessary human and material resources for their operations,” and which is focused on peacekeeping missions. The NDP opposes Canadian involvement in the military fight against Islamic State, an operation to which the Tories committed more than $300 million over a 12-month stretch.

—Establish an Office of the Inspector General

Liberal:  Under Trudeau, Liberals have pilloried the Tories’ record on procurement. Perhaps that support for more and better military hardware is meant, in part, to counterbalance Liberal opposition to both Canada’s initial military contribution to the fight against Islamic State and the mission’s one-year extension. “Under Mr. Harper, procurement has become such an disaster that vital equipment is failing to reach the Forces,” Liberal Defence Critic Joyce Murray has said.

—Reject the F-35 as Canada’s next fighter jet

Green:  They bemoan a recent drop in defence expenditures and the Tory record on military procurement. The Greens say Parliament should have “more substantial oversight”of defence spending. The party opposes the fight against Islamic State, and supports a “realignment” of spending to support disaster assistance and United Nations-sanctioned peacekeeping missions. 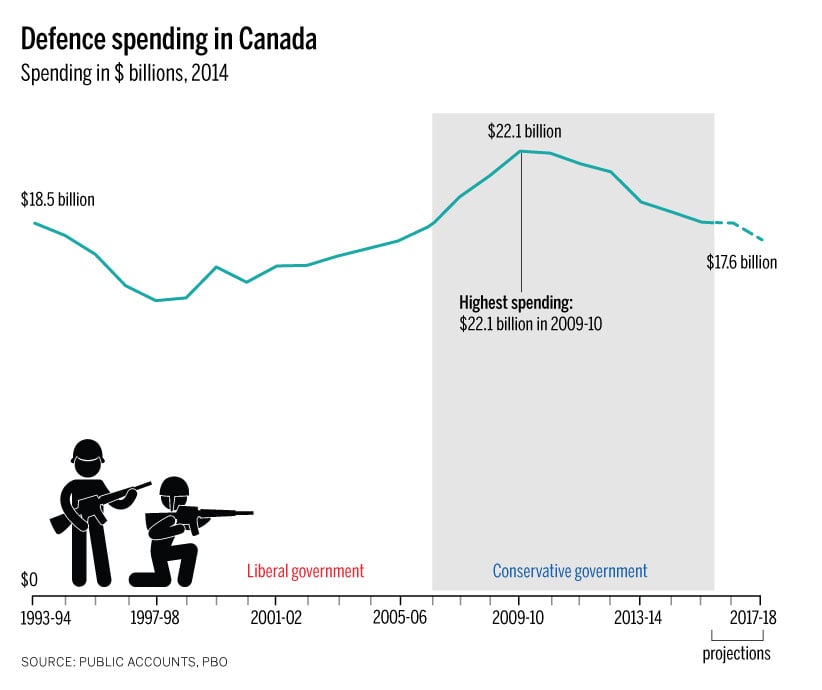 “Canadians should be aware that there are major problems in how Canada replaces ships for its Navy. Today, there are critical capability gaps. Our Navy has no ships for resupply, even though a replacement has been in the works for more than a decade. Nor does it have any seaworthy destroyers. Promised ships to patrol the Arctic are years behind schedule. Canada’s frigates are excellent, but other parts of the Navy are at rust-out. It is far from clear if the much-touted shipbuilding strategy, launched in 2011, will produce the ships Canada needs for its security and defence.”
—Elinor Sloan, Carleton University professor

DND doesn’t have enough money to implement the Canada First Defence Strategy (CFDS). The defence policy and military capabilities outlined in that policy to protect Canada’s interests required annual budget increases for 20 years. Instead, DND has almost $4 billion a year and more than $30 billion overall less money than it was supposed to be under CFDS, even after the 2015 budget. The next government will need to boost defence spending to implement the current policy, or issue a new defence strategy that cuts the size of the armed forces and cancels future procurements to fit the available funding.\
—David Perry, Senior Analyst at the Canadian Global Affairs Institute