Did Trudeau cross a line commenting on the Stanley verdict? 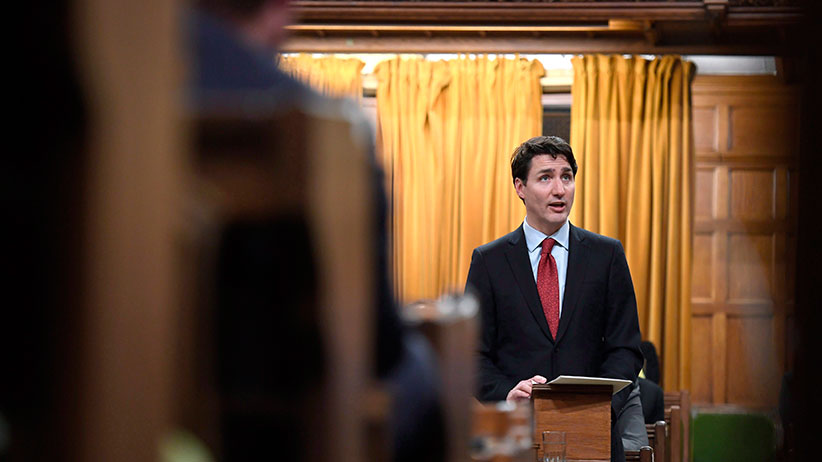 Justin Trudeau looks towards the gallery, where the family of Colten Boushie watch as he delivers a speech on the recognition and implementation of Indigenous rights on Parliament Hill on Wednesday, Feb. 14, 2018. (THE CANADIAN PRESS/Justin Tang)

A new poll from the Angus Reid Institute shows that nearly half of Canadians think Prime Minister Justin Trudeau was wrong to react on Twitter after Gerald Stanley, a white Saskatchewan farmer charged in the death of Colten Boushie, a young Cree man, was found not guilty of second-degree murder.

Shortly after the contentious verdict was handed down on the evening of Feb. 9, Trudeau, who was in Los Angeles at the end of a speaking tour, tweeted: “I can’t imagine the pain and sorrow the Boushie family is feeling tonight.” Some lawyers have criticized Trudeau and federal Justice Minister Jody Wilson-Raybould—who also tweeted that evening, in part, “we can do better”—for seeming to call the trial’s outcome into question.

Both Trudeau and Wilson-Raybould said later they were commenting, not narrowly on the trial, but more broadly on how Indigenous people fare in the justice system. Other politicians also waded in. Many First Nations leaders and Indigenous people across Canada were outraged by the not-guilty verdict, especially given media reports about how Stanley’s lawyers were able, under the federal rules for jury-selection, to reject any prospective jurors who looked Indigenous.

Still, many Canadians—and the vast majority of people in Saskatchewan—seem to agree with legal experts who thought Trudeau crossed a line by commenting. The Angus Reid poll asked, “Would say it was appropriate or inappropriate for the Prime Minister to personally respond to the Boushie verdict?” Nationally, 46 per cent said it was inappropriate, 32 per cent appropriate, and 22 per cent weren’t sure.

In Saskatchewan, where the trial was of course most closely watched, Trudeau’s expression of empathy via social media was viewed as inappropriate by an overwhelming 71 per cent, with just 18 per cent saying it was appropriate, and 11 per cent uncertain. That’s roughly in line with the Saskatchewan view of the fairness of the trial itself, on which 63 per cent in the province told the polling institute the jury’s decision was “good and fair” and just 17 per cent viewing it as “flawed and wrong.”

“There’s an important regional angle that needs to be understood here,” Angus Reid, the veteran pollster and chairman of the non-profit opinion research institute, said in an interview. “It’s resonating on the Prairie provinces, where I think people are more likely to understand the situation of having a large farm, the sense of isolation.”

In much of the rest of the country, though, opinion is more evenly divided. Overall, 30 per cent of Canadians said their overall impression was that the decision was fair, with about 32 per cent viewing it as wrong. The decision split opinion about evenly in Ontario and British Columbia, in contrast to the impression across the Prairies, where many more people thought it was a fair trial.

Along with that regional schism, opinion among Canadians on Trudeau’s tweet splits, not surprisingly, along party lines. Fully 81 per cent of past Conservative voters said the Prime Minister behaved inappropriately, compared to just 43 per cent of Liberal voters, and 37 per cent who voted for the NDP.

However, Reid pointed out that still leaves a substantial 33 per cent of Liberals disapproving of Trudeau’s response, and 24 per cent of his party’s past voters unsure—numbers that suggest even Canadians inclined to support the Liberals weren’t solidly behind Trudeau on this one.

Reid said this controversy should be seen in the context of other recent episodes when Trudeau has been on the defensive. He pointed to Trudeau’s recent trip to India, which was widely panned by pundits as a fiasco, and backlash from religious groups over his government’s new requirement that applicants for federal summer jobs grants agree to “respect” certain values, including abortion rights.

Considered together with those other rough patches, Reid said Trudeau’s reaction to the Stanley trial might be part of a cumulative problem. “This is one more issue where a lot of Canadians are saying, ‘Here’s the Prime Minister behaving inappropriately’,” he said. “Execution is not what it should be.”