Like it or not, there will be politics at play 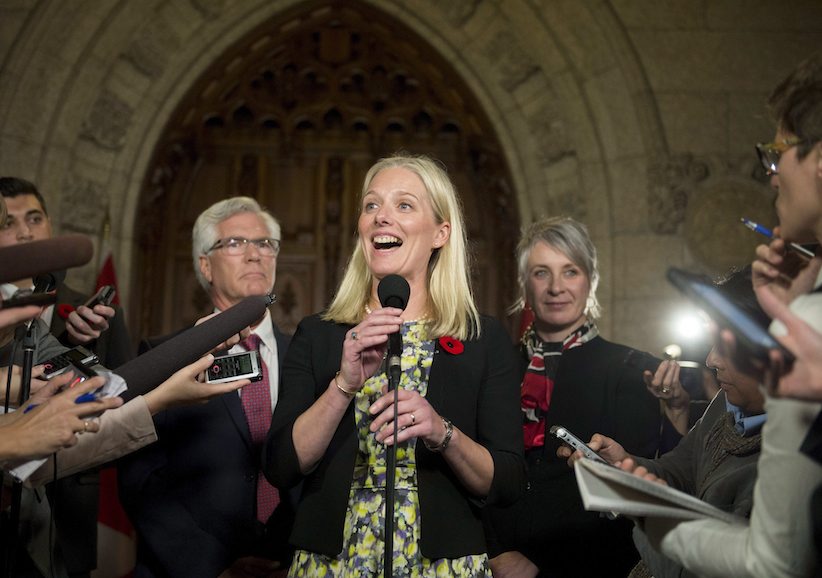 Minister of Environment and Climate Change Catherine McKenna speaks to reporters in the foyer on Parliament Hill after being sworn in earlier in the day, on Nov. 4, 2015, in Ottawa. (Justin Tang/CP)

Days before U.S. President Barack Obama cancelled the Keystone XL pipeline—in spite of the fact that his own State Department told him it would have no material effect on greenhouse gas emissions—project owner TransCanada Corp. asked for a suspension of its permit bid to keep the fight alive for another day. In announcing that this last-ditch request had been denied, White House spokesman Josh Earnest said, apparently with a straight face, “There’s reason to believe there may be politics at play here.”

The sorry tale of Keystone—a tale of botched diplomacy, environmental misinformation and presidential (that is to say, political) grandstanding—has done great damage to Canada-U.S. relations. In sharp contrast, there’s considerably more optimism regarding the upcoming United Nations climate change conference in Paris. Many are declaring it a fresh start for Canada.

“People are extraordinarily happy to see that Canada is seated at the table, and that Canada accepts the scientific evidence that climate change is one of the greatest threats of our time and will be doing our part,” new federal Environment and Climate Change Minister Catherine McKenna said from Paris this week, where she was attending some early ministerial meetings. The mood among environmental groups seems almost giddy.

Amid high hopes and sunny dispositions, however, it’s necessary to remind everyone that political calculations remain a crucial component of any climate change discussion. The complicated realities of Canadian federalism will inevitably shape Ottawa’s policy on carbon emissions. Like it or not, there will be politics at play.

Prime Minister Justin Trudeau has not promised to create a comprehensive federal plan to limit greenhouse gas emissions. Instead, he will let the provinces take the lead on this file; Ottawa’s contribution will be to set some sort of overarching national target. This seems a sensible approach, since the provinces are unlikely to accept top-down federal intrusion in this sensitive area of shared jurisdiction. Plus, several provinces are already heavily invested in their own programs and will be reluctant to change course. But such a situation leaves Ottawa vulnerable to policies designed primarily with provincial interests in mind.

Quebec, for example, currently operates a cap-and-trade system, in partnership with California, that sets an effective price of $12 per tonne for carbon-emissions credits. While Quebec has declared ambitious targets for reducing greenhouse gases in the future, it has also taken steps to shelter its most important industries from the true cost of carbon trading. Aluminum, cement, mining, pulp and paper and agri-food all receive their emissions credits at no charge, to ensure the system does not “compromise their profitability.”

Taking a different route, B.C. introduced a broad-based carbon tax in 2008, now set at $30 per tonne. This has been called a “textbook” policy by economists who appreciate the fact that all money collected is to be returned to the economy through lower income taxes. Carbon is thus priced, but in a way that avoids punishing consumers. Yet, B.C.’s tax appears just as susceptible to political pressure and manipulation as cap-and-trade. A successful lobbying campaign by farmers resulted in an exemption for the entire agricultural sector. And those tax reductions have recently become narrower and more politicized, with certain favoured industries (such as film production) receiving special dispensation.

So what does this experience say about the prospects for Trudeau’s promise of coast-to-coast climate change policy? Even if he’s successful in getting all provinces and territories to embrace carbon pricing under some federal banner, those plans will inevitably be crafted to minimize any hardship for the individual provinces themselves. Ontario has already declared it will join Quebec in the carbon-trading business. Presumably, this means another long list of businesses qualifying for free emissions credits. And if Quebec’s mining sector gets a free ride, surely Ontario’s will want a similar deal. Provinces that decide to mimic B.C.’s carbon tax will have similar options to play favourites.

All this pushes against expectations that a national system ought to produce uniform and reliable results across the country. Trudeau can expect to spend considerable time trying to prevent these various provincial systems from undercutting or competing with one another, to the detriment of his overall objectives. Herding cats comes to mind. It is also possible that diverse provincial policies will exacerbate regional economic differences over time, as businesses seek to locate in provinces with carbon-price regimes favourable to their circumstances. This could have further unintended consequences on federal transfers and equalization.

None of this means Canada won’t make progress on climate change, nor that significant reductions in carbon emissions are impossible. But results may vary, and politics, not scientific evidence, will be the overriding concern. Cleaning up the environment should prove to be a messy business indeed.