All together now: 'Mission accomplished' 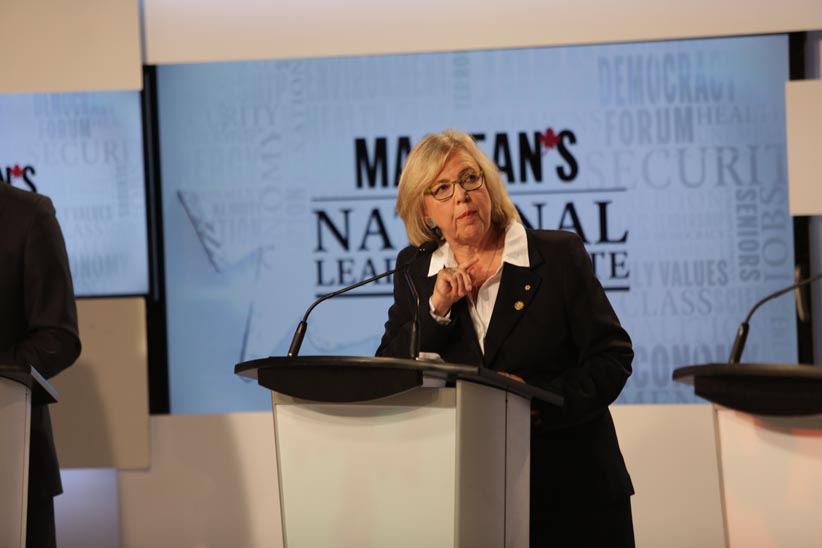 As political theatre, Thursday’s leaders debate didn’t deliver major gaffes or knock-out punches destined to cripple or catapult any campaign. Nor did it provide takeaway meme-worthy moments. Thomas Mulcair hammering away at the Liberal leader with, “What’s your number, Mr. Trudeau? What’s your number, Justin?”—with Trudeau sharply answering “Nine”— almost qualifies, but it gets bogged down by the fact it involves unbundling the Clarity Act, Trudeau’s accusing Mulcair of speaking in French about repealing it, and the fact that Trudeau was referring to the number of justices on the Supreme Court of Canada. There were a few carefully scripted barbs, notably Mulcair’s shot at Stephen Harper, “You’re the only prime minister who, when asked about recessions on his watch, who has to ask ‘Which one?’ ” but nothing destined to make any book of Canadian quotations.

The evening’s drama had another purpose—an opportunity to assess how well the leaders’ prep permitted them to shed partisan-created stereotypes and also to foreshadow future fault lines. For Harper, this meant showing he could stoically withstand attacks on his record while not appearing related to hitchBOT. Trudeau had to show he was “ready” to lead. Mulcair had to shed the “angry” label he’s been saddled with. And Elizabeth May had to exploit her cameo, the only opportunity she’s been given to prove she deserves a podium in the federal leaders debates.

All could leave the stage saying “Mission Accomplished.” Harper managed credible facsimiles of smiles while avowing Canada was in tip-top shape, contrary to what his opponents had to say. A tanned, wide-eyed Mulcair appeared preternaturally placid, and at the outset enunciated his words so slowly that he won the label “Prozac Tom” on Twitter. Trudeau, his famous locks tamed, had come to parry—so much so he jumped in for camera time twice, sparing Harper from dealing with critical questions posed by May. And May, attired in the corporate suiting worn by her male colleagues, proved herself a worthy addition to the mix with polished, data-rich ripostes and a willingness to mix it up while cleaving to civility. The Green party leader showed remarkable facility, uttering the polite preamble “With all due respect” to the Prime Minister with withering disdain.

Decisions about who stood where and the order of questions—predetermined by a draw before the debate–affected on-stage dynamics in subtle ways. This left Trudeau and Harper at the extreme ends of the stage, and Mulcair and Harper next to one another. Yet, surprisingly, the head-to-head combat so familiar from the House of Commons failed to materialize; Mulcair appeared too busy recalibrating his image for the long election before him.

Much of the script Canadians already know by heart—infrastructure, recession, deficit, pipelines. Trudeau talked “middle class,” referencing the “folks who work at big-box stores and coffee shops.” Harper hammered away at how his opponents would jack up taxes and engage in reckless spending. Mulcair repeated his mantra of $15-a-day daycare. At times, the debate action was reminiscent of the Pirandello farce: Either we had the strongest employment growth in the G8 (Harper) or the weakest (May).

May also delivered sharp relief to the big themes being bandied about. With only two seats in the House of Commons, the Green party is 10 seats away from official party status. But that fact also freed her to serve in a quasi-watchdog status that demanded accountability of the front-runners.  She drilled down, questioning Harper’s deal with China, battering away at Mulcair’s position on the Kinder Morgan pipeline. She brought context to a discussion of the need for democratic reforms, pointing out the irony of everyone talking over one another during a discussion that touched on the need to fix the parliamentary process. She even offered post-debate homework, instructing the nation to google “Joe Fogarty” in relation to Bill C-51. The former lawyer also showed the most abiding concern for constitutionality, going after the Conservatives for killing the Climate Change Accountability Act in the Senate. The performance warrants an encore.

Justin Trudeau, left with the last word, reverted to character, speaking of why his love of the country make him ready to lead the country. “Better is always possible,” he told the nation. As the first big act of a 79-day national drama came to an end, that’s as happy an ending as we can hope.