Philippe J. Fournier: The Conservative leader needs to move his party to the centre if he has any chance of beating the Liberals. If he fails, he won't get a second chance. 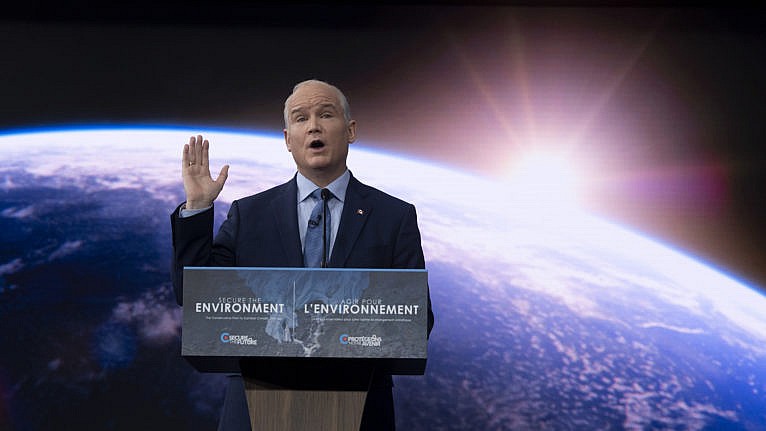 O'Toole speaks about climate change during an announcement in Ottawa on April 15, 2021 (CP/Adrian Wyld)

Last week, federal Conservative leader Erin O’Toole boldly went where his predecessor would not: He introduced a plan to put a price on carbon emissions which would potentially replace the current federal program, should O’Toole and his party take the reins of the House of Commons in the next election.

Reactions to the plan have been mixed, and I will let more knowledgeable experts argue the merits of O’Toole’s plan. However, O’Toole had promised to get rid of Trudeau’s carbon tax during the CPC leadership race and even signed a pledge on the matter, so some pushback from the conservative faithful had to be expected. Many columns I have read from conservative-leaning publications since have claimed that O’Toole has gone against the will of the conservative base. “O’Toole has turned on his back on supporters” one Edmonton Sun columnist wrote. “His plan to return the money it raises to the public is more interventionist than Trudeau’s,” a Postmedia editorial said.

However, O’Toole’s strategy is becoming increasing clear: He made the alliances he needed to make in order to win the leadership, such as courting the party’s social conservatives, and then understood he could not win a general election unless he stirred the party closer to the country’s political centre, where most voters in several key regions of the country actually are.

Cynics will call this electoral math; realists will call it forging a possible path to victory.

To wit, here is some interesting data from a pre-pandemic poll conducted by the Angus Reid Institute (The poll was fielded in December 2019, shortly after Andrew Scheer’s resignation as CPC leader), in which respondents were asked to choose the most important issues facing Canada today from a list. Which issue came out on top? Climate change with 36 per cent. In second place with 29 per cent was improving access to health care. Taxes and access to affordable housing were in third and fourth place respectively.

Breaking down the results by vote intentions, the numbers reveal a stark contrast between what conservative and non-conservative voters perceive as their priorities:

(On the table above, the top-three issues per party supporters are highlighted in blue.)

While climate change topped the list of Liberal, NDP, BQ and Green voters, it did not even make the top-five issues among conservative voters. For conservatives, the top-three issues were related to taxes, the federal deficit, and transparency/honesty in the federal government.

So did Erin O’Toole turn his back on his supporters by adding carbon-pricing mechanisms to the party’s platform? While some will argue he did just that, others will point out that he had no alternative—unless the CPC plans to remain on opposition benches for the next few years. The conservative base in this country is strong, probably stronger than any other federal party, but it alone cannot deliver enough seats to win power at the House of Commons.

In short, if you cannot bring voters to you, then go where voters are.

Politically, it’s a matter of simple math: Hypothetically, if O’Toole loses 15 to 20 points in Alberta compared to 2019 (as polls currently show), but manages to grab five points away from the Liberals in Ontario, the most probable result would be a net win of seats for the CPC. Obviously, the balancing act O’Toole has to perform is a challenging one: Keep enough of the base on his side—even at the risk of losing a handful of uncompromising ones—and convince moderate voters disappointed by (or tired of) the Trudeau Liberals to tip the seat totals in the CPC’s favour.

In a radio interview last fall shortly before a vote of confidence (which could have brought down the governing Liberals), the host asked whether O’Toole would be given a second chance should he lose his first election as leader. At the time, with O’Toole in charge for less than two months, it was plausible to believe that perhaps O’Toole would be given this opportunity, which had been denied to Andrew Scheer. But O’Toole recent actions may have completely flipped that script.

If O’Toole is successful in the next election, no doubt that many (if not most) conservative voters will at least tolerate O’Toole’s carbon pricing, and perhaps will choose to fight reducing its scope rather than abolish it entirely. However, should the Liberals win the next election with O’Toole leading the CPC to a third consecutive defeat, it would be more likely than not that an aggrieved membership, which has recently voted against a motion stating that “Climate change is real and the Conservative Party should act upon it”, would give O’Toole the boot.

Therefore, it is not hyperbole to state that O’Toole, with his new carbon pricing plan, has pushed all his chips in the political pot, and will be playing his political career whenever the next federal election is held.