Increasingly, voters hear only the voices they agree with. How to break free from the echo chamber. 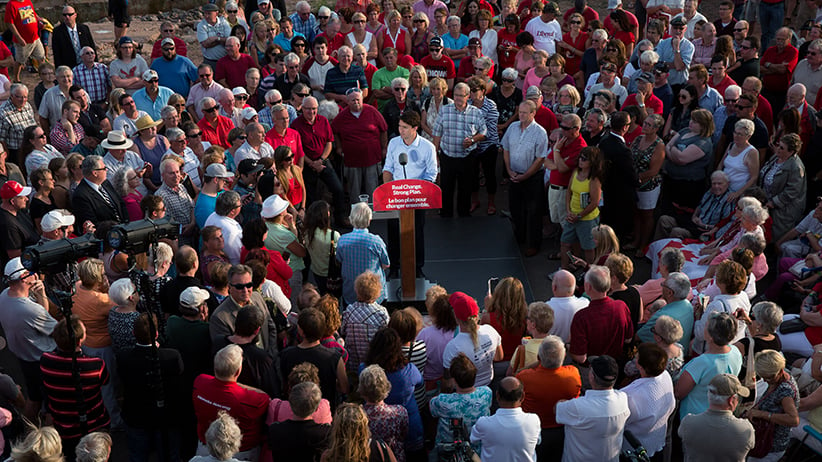 Inside the box: Even those we ultimately elect will only attend rallies comprised of true believers. (Adam Scotti/Liberal Party)

More and more, we are living in our own tailor-made media cocoons, carefully constructed shells that surround us with voices and ideas that support our own beliefs. Conversely, they also shelter us from anything that might challenge our perspective. This distorts our view of the world, makes us less able to understand others, and less likely to embrace new ideas.

My parents and my grandparents before them had three sources of news: the local paper, the radio, and the 6 o’clock television news. On a typical day, I get my news from two or three newspapers, the radio, Twitter, Facebook, Reddit, a couple of news sites and maybe LinkedIn. And I’m probably below average. A recent survey by Ipsos Reid examined 16 different types of media commonly used by Canadians for their news. Another poll by the Media Technology Monitor in 2014 found that the number of Canadians who are using the Internet as their main source of news has increased by 20 per cent over the previous two years.

The options to filter that news are also increasing. The most common online news aggregators and social media platforms, such as Facebook and Twitter, allow us to customize what we see. Are stories about the global refugee crisis getting you down? Click. Sixty million people just disappeared. Is a particular journalist saying something unpleasant about your political party? Click. As far as you’re concerned, her mouth has been forever covered by especially durable duct tape.

When we tune out that journalist because we feel she isn’t being “objective,” what we really mean is that her views do not support our pre-existing beliefs. In fact, truly objective news is impossible. Every adjective and headline shifts the story in one direction or another. Even if you reduced a story to just numbers and facts, much would depend on which figures and in which order.

Unfortunately, our habit of tuning out ideas and voices we don’t like is part of our biological programming. “Confirmation bias,” the tendency to search for information that confirms our beliefs and to remember it longer, is a well-documented and inescapable element of our behaviour. As a result, we instinctively tailor our universe to limit the emotionally upsetting views that contradict us. Until recently, the shortage of media choices made this hard to do. Left or right, we all watched the same suppertime newscast. Now, it’s finally possible to be bound in a nutshell, and count ourselves kings of infinite space, because we can avoid any bad dreams.

This has been very apparent in the refugee debate. A significant number of Canadians are opposed to allowing in more Syrians, due to the possibility that they would include Islamic State supporters, or that they would spread Islam or because we should be helping our own poor first. If you listen to a specific set of radio stations, read certain blogs and interact with people similar to yourself on Facebook, these ideas aren’t only defensible, they are overwhelmingly obvious.

Likewise, another group of Canadians who subscribe to different newspapers, listen to the CBC and read the Huffington Post are equally convinced of the self-evident fact that there is a clear need for Canada to do more, and accepting far more refugees would neither strain our economy nor our social fabric.
In reality, both sides are filtering out important pieces of information, making it impossible to see the full picture. Which is why neither group can grasp how anyone could possibly be so asinine as to dispute what is so clearly self-evident.

This is bad, and not just because it prevents us from having civil conversations about Canada’s refugee and immigration policies. It creates a lack of empathy that leads us to denigrate and dismiss the opinions of others. The leaders of all political parties, who are equally unable to acknowledge they do not have a monopoly on the truth, demonstrate this attitude repeatedly.

Our self-made cocoons also impair our ability to make intelligent decisions. In this election, most voters will not watch a single debate, read any of the party platforms or attend any campaign events. They don’t need to. They already know for whom they’re going to vote, and, coincidentally, everyone else in his or her cocoon is voting the same way.

And for those we ultimately elect? Their own filters will make their governing decisions less effective. Ruling parties of all stripes tend only to listen to academics who support their agenda, only attend rallies that contain true believers, only read newspapers that endorse their policies and only engage constituents who already voted for them. If it looks as if the Conservative party has only been thinking about its base for the last nine years, it’s because that’s literally true.

There are ways to cut through these cocoons, however. Just by being aware that you are constantly self-censoring the information that reaches you helps. You can also consciously resist the urge to mute the outspoken critic on Twitter, or unfollow the Facebook friend who shares articles in support of that politician you loathe. One step further would be to actually read some of those articles, or pick up a newspaper you wouldn’t normally read, no matter how much of a rag you think it is.

And, during this election, you can also try using websites such as Vote Compass. It acts like an online dating site for your vote. You are asked a series of questions about which policy issues are important to you and where you stand on them. It then shows you which parties align most closely with your views. It cuts through your filters and forces you to consider that you may, in fact, have very little in common with the party you passionately support. You’d be surprised at what else you might discover outside of your cocoon.