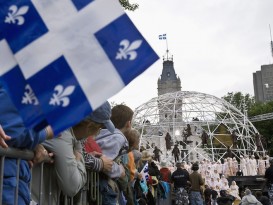 [UPDATED: I have now embedded the documents discussed here at the bottom of this post so you can read them in their entirety – pw]

On Wednesday the Attorney General of Canada intervened in a Quebec Superior Court case, calling for Quebec’s iconic Law 99 to be thrown out. This is the first time Stephen Harper’s government has taken any formal legal position on Quebec secession, and the position it has taken is practically identical to those Jean Chrétien and Stéphane Dion used to hold.

This will take some explaining.

The Clarity Act was not the final word in the legal battle between the Chrétien Liberals and Lucien Bouchard’s Parti Québécois government. The Clarity Act, tabled in 1999 and given royal assent in 2000, set out Parliament’s obligations in the event of a provincial referendum on secession. (Really, a Quebec referendum.) It demanded that Parliament judge both the clarity of a question and then, later, of any referendum majority, before beginning to negotiate secession. And it described the subjects that must be discussed in such a negotiation.

But Bouchard could not tolerate what he perceived as an outrage against Quebec’s right of self-determination, so he had the National Assembly pass Law 99, “An Act respecting the exercise of the fundamental rights and prerogatives of the Québec people and the Québec State.” Passed only weeks before Bouchard resigned as Premier, Law 99 is a sweeping declaration that only Quebec voters and the Quebec National Assembly can decide Quebec’s place inside or outside Canada. It is a self-issued license for unilateral declaration of independence, and amounted to a declaration that none of the Chrétien-era legal battles over secession, culminating in a Supreme Court reference and the Clarity Act, had ever happened, or that if it had, it need not hinder Quebec:

3. The Québec people, acting through its own political institutions, shall determine alone the mode of exercise of its right to choose the political regime and legal status of Québec.

13. No other parliament or government may reduce the powers, authority, sovereignty or legitimacy of the National Assembly, or impose constraint on the democratic will of the Québec people to determine its own future.

The Chrétien government made no legal challenge of Law 99. Neither did any of its successors. It fell to Keith Henderson, the last leader of Quebec’s dying Anglo-rights Equality Party, to challenge the law as an individual. His lawyer is Brent Tyler, a frequent advocate for anglophone rights back in the days when language politics were more salient in Quebec politics.

It’s taken 13 years for their challenge to get anywhere at all. Lawyers for the Quebec government — and recall that for most of this time, the Quebec government in question was Jean Charest’s — have defended Law 99 by (a) stalling whenever possible; (b) insisting that the law is a general declaration of principles, and that any specific challenge to its provisions is too hypothetical for courts to consider. Henderson and Tyler have won against those arguments, but it has been slow going.

Now it seems that Quebec Superior Court is preparing to hear the case, for real, in 2014. And suddenly things have gotten very interesting very quickly.

First, Tyler and Henderson filed a “Re-Amended Motion for a Declaratory Judgment,” essentialy re-stating their entire case for the umpteenth time, and it’s a broadside against almost every paragraph of the Bouchard law. One example among many:

“It lies within the power, not of “the Quebec people,” acting alone, but of the people of Canada, acting through the various governments duly elected and recognized under the Constitution, to effect whatever constitutional arrangements are desired within Canadian territory;”

But it goes on for 17 pages. With lots of such arguments.

So second, the Quebec attorney general’s lawyers filed a defence, and for once it was an argument on the facts, not a mere stalling tactic. I hope to post all these documents soon, but to summarize, the Quebec AG’s defence is curious: it argues, in effect, that this law spelling out “fundamental rights” of the Quebec people does no such thing, and that there is no need to view its provisions as any dispute with Canadian law and the Canadian constitution. I believe that, if they read the Quebec AG defence and were honest with themselves, Quebec sovereignists would be as upset at their own government’s attempt to low-bridge Law 99 as with any other part of this drama.

But the third event is the big one. Faced with the blatant contradiction between Law 99’s plain language and the circumstances of its adoption on one hand; and the these-aren’t-the-droids-you’re-looking-for defence of AG Quebec on the other; the federal Justice Department is intervening, for the first time in 15 years, to assert the primacy of Canadian law in any debate over Quebec’s future.

AG Canada argues in two steps: First, that “Sections 1 to 5 and 13” of Law 99 “should be read down so that their potential scope of operation is brought within the limits of the legislative power of Quebec authorized by the Constitution of Canada.” “Reading down” is a form of judicial pruning: if a province makes grand claims about its authority, a court may “read down” the language so that it can mean no more than what a province is able to do within its jurisdictions. Essentially, the feds are asking the Quebec Superior Court to declare that Law 99 is mere throat-clearing with no more legal meaning than if the New Brunswick legislature had announced an ability to repeal gravity.

Secondly, if the Court finds it can’t read down these provisions, AG Canada says it should simply declare them “ultra vires” — outside Quebec’s constitutional competence — and therefore “of no force or effect.”

To make things clear, the feds call on the Court to declare: “that (1) under the Constitution of Canada, Quebec is established as a province of Canada, and (2) the impugned Act does not and can never provide the legal basis for a unilateral declaration of independence… or the unilateral secession of the ‘Québec State’ from the Canadian federation.”

There’s a lot more detail (even than what I’ve given!) but I can’t cut-and-paste the documents I have, and half of them are in French, so some of that will await another day. A few things are worth pointing out.

First, Stephen Harper has been kept personally apprised of the progress of the Henderson/Tyler challenge to Law 99. William Johnson, the journalist, Anglo-rights activist and author of the first book-length Harper biography, has been writing to Harper to urge him to act against Law 99.  “I urged Harper to send a reference to the Supreme Court on Quebec’s Bill 99,” Bill Johnson told me in a letter in February of this year. “The (unofficial) feedback I received from someone close to Harper was that, for Harper to act on 99, there would have to be a groundswell of support in the media. So I’m working on it, perhaps awkwardly, but with determination.”

Johnson got precisely nowhere in his attempt to make Law 99 a matter of public controversy. He couldn’t even get me to write about it. But the Justice Department and Privy Council Office have lawyers who watch every twitch in this case, regardless of any public attention. Finally this month they decided the Quebec government had made arguments on the fundamentals which required rebuttal.

The other thing that strikes me is that there was no public announcement of the federal government’s action. I found out about it when Brent Tyler wrote to me, sending me the pertinent documents. When Chrétien intervened in 1997 in a Quebec lower-court case on secession, his Justice Minister Allan Rock sent out news releases, held news conferences, explained every move. This time it was all under the radar until now.

But the law is the law. Once again there is a direct legal confrontation between the governments of Quebec and Canada over the manner in which Quebec would one day leave Confederation, if it could. Stephen Harper, author of the Québécois nation motion in the House of Commons, has made a new move.

UPDATE, 5:20 p.m.: Here are the documents discussed in this article. First, the re-amended motion from Keith Henderson and lawyer Brent Tyler, calling for Law 99 to be thrown out:

Next, the response from Quebec’s Attorney General, saying this is much ado about hypotheticals:

Finally, the intervention from the Attorney General of Canada, calling for Law 99 to be “read down” or thrown out: