From a $7,500 swing set to a 'carbon tax cover-up,' we look at questionable claims made by the parties and politicians on social media 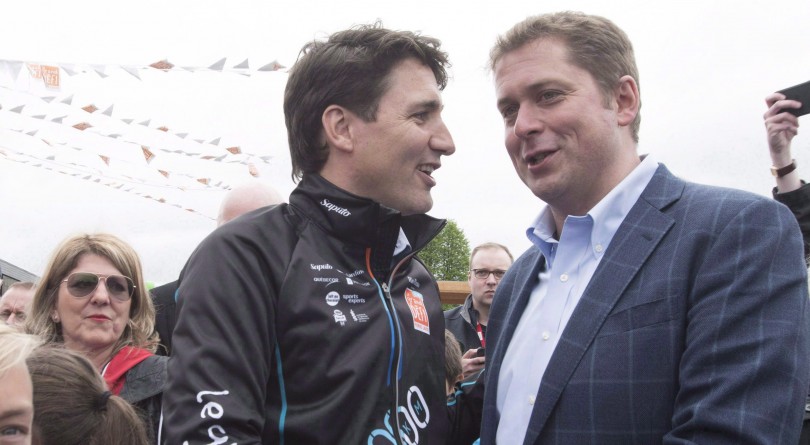 In recent weeks, the Conservatives—and leader Andrew Scheer in particular—have been making a number of claims about the government that seem to stretch credulity. The reason, if we are to believe pundits like Andrew MacDougall (who has written about this in Maclean’s) and Rachel Curran, is to establish a narrative that Trudeau is a spendthrift who is reckless with the public purse on small items, which also would mean that he’s reckless with the big things, too.

It’s also trying to establish a narrative that the Conservatives are looking out for the cost of living for ordinary Canadians. The problem is that not all of their claims add up.

Here, we fact check some of these Tory claims—and we’ll continue to keep track of questionable statements on social media made by the Conservatives, as well as the Liberals (see below) and NDP in the lead up to the next election.

This kind of wasteful spending may seem insignificant to Justin Trudeau, but he must realize that it isn’t his money to spend. #cdnpoli pic.twitter.com/oY2YVOEDuH

The prime ministerial residence at Harrington Lake is one of the official residences owned and maintained by the National Capital Commission. In the absence of 24 Sussex Drive—the NCC still has not decided whether or not it will renovate the crumbling heritage property—Harrington Lake has taken over some of the hosting functions that 24 Sussex normally would feature. For example, Trudeau recently hosted French president Emmanuel Macron and his wife, Brigitte, for dinner at Harrington Lake.

The charge that he’s spent $90,000 of taxpayer funds to upgrade the property stem from media reports that recent upgrades to the property included a new screened-in patio for $10,000, three patio umbrellas and stands purchased for $3,000, and that an old deck and floating dock were replaced for $12,000 each. Upgrades also included a new boat rack for $8,500, and a golf cart for use by staff and family for $5,000.

Where media attention was highlighted was the report that a new playground structure with swings was installed at a cost of $7,500. It was later clarified that the prime minister personally paid for the structure, while the NCC paid $1,800 for installation. Trudeau also personally paid for a sauna, but it cost $4,368 to install the electrical service. On top of that, the snow removal contract has increased by $17,000 to $45,000.

The NCC says that another $1 million has been set aside for further upgrades to the property to replace windows, shore up masonry, and upgrade the building’s heating and cooling systems.

Scheer asked about the $7,500 play structure in Question Period several times on June 20, but Trudeau did not refute the cost at the time, simply pointing to NCC upkeep, until his staff did later in the day.

The report on renovations to Harrington Lake has been completely misrepresented by Conservatives.
The PM paid for the outdoor playset himself & installation was done by the NCC – as per policy. Installation cost $990+tax. https://t.co/8fopujXrdz

A lot of taxpayer money has been spent on Harrington Lake. But to say Trudeau charged Canadians $90,000 for it doesn’t hold up.

2. The Liberals have “taxed away 94 cents out of every extra dollar earned”

Why is Justin Trudeau punishing Canadians’ success? According to @FraserInstitute, Canadian families earned an extra 3.3% last year, but taxes were up by 3.1%. Justin Trudeau’s Liberals taxed away 94 cents out of every extra dollar earned. Canadians are missing out. https://t.co/3B0aI09BPw

Andrew Scheer quoted a Fraser Institute report that cited that family incomes increased 3.3 per cent last year, while taxes increased 3.1 per cent, and equated that as meaning that 94 per cent of the increase was taken up by taxes. It’s not only bad math, it’s completely misleading. (Scheer’s tweet also linked to a Lorne Gunther column which also made the false 94 cents claim).

The Fraser report counts total taxes, including municipal and provincial, so it’s more than a little disingenuous for Scheer to blame this all on the federal government. As well, the Fraser calculation includes increases to CPP premiums, which are not actually taxes but rather, are deferred income.

But more importantly, it’s misleading and wrong to compare a change in your tax burden to a change in your income. While it’s obvious that Scheer divided the 3.1 per cent by the 3.3 per cent, that’s not a useful calculation:

If anything this report is saying the average tax rate went down slightly https://t.co/azw1SLNMk7

Canadians will be facing a BIG tax bill thanks to Justin Trudeau’s Carbon Tax, but he still won’t come clean about how much the total cost will be. It’s time for Justin Trudeau to come clean with Canadians and end his #CarbonTaxCoverUp. pic.twitter.com/5CLdGdTT54

For the past several months, the Conservatives have been demanding the government release a document prepared during the 2015 election showing how much a theoretical carbon tax could cost. While they have been treating this as a “smoking gun” what’s important to recognize is that even if the numbers were to be released (Access to Information requests returned blacked out figures), they would be based on assumptions that pre-date the government’s actual policies in terms of how a federal carbon price backstop would work.

They would also not take into account how provinces plan to enact the prices or recycle the revenues. Those are important contexts to have for any carbon pricing numbers.

In the absence of this document, the Tories started releasing figures from other reports, such as one that Jennifer Winter from the University of Calgary prepared. The problem is that the numbers that Scheer posted are again, without context, and don’t show what the assumptions built into the calculation were.

For example, the figures come from before the federal framework was announced, and they assume no behavioural changes on the part of households—which is the whole point of a carbon tax. The specific figures cited in Scheer’s tweet come from a table that assumes a $100/tonne carbon price (the federal plan is for it to rise to $50/tonne). Dr. Winter herself tweeted that this is an inaccurate portrayal of her work.

This is an inaccurate portrayal of my work. My numbers were produced for the Senate in April 2017, and reproduced on @policy_school blog in May 2017. The Govt of Canada discussion paper on carbon pricing was released in May 2017 (see: https://t.co/7AU7m9EBwl). https://t.co/vHuwuXCkTM

We’ve heard other carbon-tax related figures, such as the Parliamentary Budget Officer’s projection that a carbon tax could blow a $10 billion hole in GDP (that was only the assumption that proceeds are returned to Canadians directly in lump-sum payments rather than having the revenues recycled with tax cuts, which would ensure a negligible impact on GDP), or that the Alberta price could cost people $1,100/year in carbon taxes (this would only be the case for people making $600,000 per year). None of them are an accurate reflection of the federal government’s policy.

Yep – based on my analysis of Alberta using StatCan data, the average impact of the carbon tax in 2018 among households with income over $600k/yr is just under $1100. The average net impact among household with incomes less than $100k per year is predicted to be $110. #cdnpoli https://t.co/NnW5f24GId

While the Tories have distorted the importance of this number, it is curious that the Liberals have not released the figure.

1. “Really wrong” about girls in STEM

What’s “really wrong” is the Conservatives blatant denial of support for women who wish to enter the skilled trades.

RT if you agree. pic.twitter.com/Wu579xEG2X

Following a profile piece in the Globe and Mail on Conservative status of women critic Rachael Harder, Liberal MP Celina Caesar-Chavannes put out a tweet claiming that Harder said it was “really wrong” that the Liberals were creating opportunities for women in skilled trades. The problem? It’s not really what Harder said.

In the piece, Harder stated that it was “really wrong” for Finance Minister Bill Morneau to push for more women to enter the skilled trades and STEM fields, arguing that women should decide for themselves what they want to do with their lives, and equated it with instituting quotas.

Harder cited witness testimony from the Commons status of women committee, saying she’s heard stories of women who wind up being poorly treated after they were promoted to meet an equity target.

Of course, it should be noted that Harder and the Conservatives did vote to support the government bill to force corporations to disclose the diversity on their boards and in senior management, and the last three Conservative budgets included measures designed to get more women on corporate boards.

CORRECTION, June 28, 2018: An earlier version of this story stated that the sauna the PM paid for was worth $4,368. In fact, that was the cost to install the electrical service.