Paul Wells: After years of extravagant claims and no results, Ottawa's dream of a Bank that would somehow turn on a gigantic global cash spigot is over 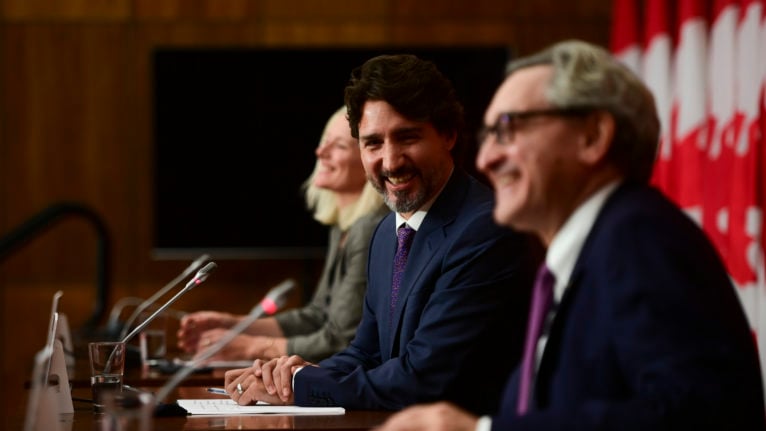 McKenna, Trudeau and Sabia hold a press conference in Ottawa on Oct. 1, 2020 about the Infrastructure Bank (CP/Sean Kilpatrick)

It’s funny the various ways expectations can shrink. Here were Justin Trudeau and Catherine McKenna announcing a new plan for the Canada Infrastructure Bank, which is a novel organization designed to turn $35 billion from the federal government into widespread confusion and apathy.

“By attracting other people’s capital the Bank maximizes the value of every dollar of taxpayer investment,” Michael Sabia, who became the chair of the Bank’s board in April, told reporters. “In this way we can stretch $1 of taxpayer investment into $2 or $3 of total project investment. This is value for taxpayers.”

I’ll say! And then McKenna, the infrastructure minister, repeated the sentiment. “There are real opportunities,” she said, to “take one taxpayer dollar and, as Michael Sabia has said, turn that into double or triple that so we can build even more good infrastructure for Canadians.”

Awesome. Money from the sky. OK, two things about that.

First of all, the multiplier Sabia and McKenna were describing—$1 from Canadians through taxes turning into $2 or $3 of total investment, i.e. matched by perhaps $1 or $2 of private or institutional investment—represents a substantial retreat from the claims this government once made of the Bank.

Here’s a chart from the late Bill Morneau’s fall economic update from Halloween, 2016. 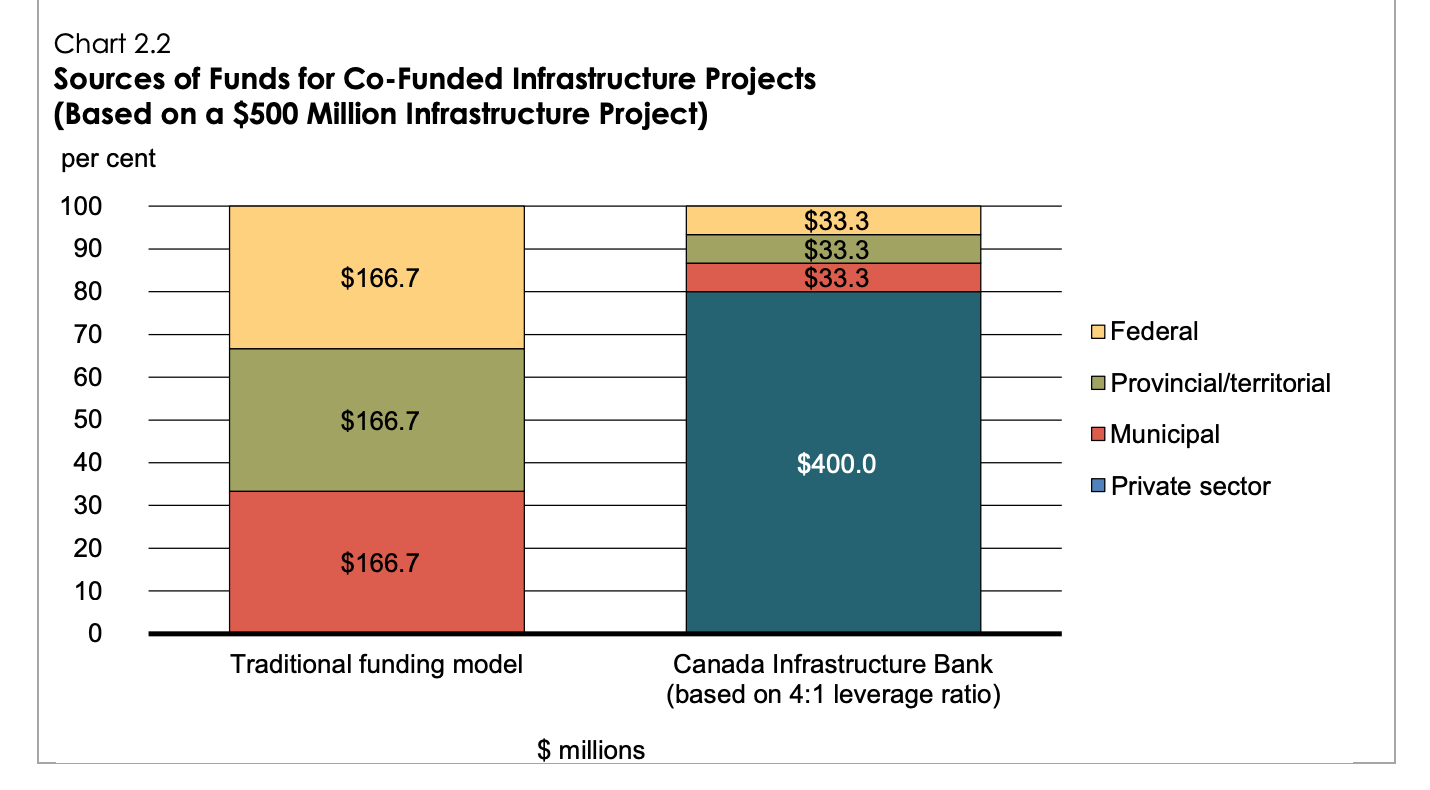 That’s $1 in tax money turning into $4 in investments from pension funds, ambitious entrepreneurs, or other deep-pocketed non-governmental sources. And, of course, since the lamented Morneau imagined that each federal dollar would automatically be matched by equal investments from a province and a municipality, the expected multiplier was vast: really $11 from other sources for every $1 from the federal government.

So that’s one thing. The other is that this entire conversation is science fiction. In its three-year history—which I would call “troubled” except usually when an organization has a “troubled” history it’s kind of exciting, whereas perhaps the better adjective for the Canada Infrastructure Bank’s existence is “boring”—it has never provided an accounting of private-sector investment for any investment the Bank has made or contemplated. So we don’t know whether the multiplier is 11, 1, or negative-pi-over-quidditch. You really should feel free to assert that $1 in CIB money attracts any amount of institutional investment that makes you feel good, and I have never had any information to rebut you, and I never will.

The Canada Infrastructure Bank exists in the exquisite realm, prized by all public administrators, where they can make the most extravagant claims about it—Trudeau called it “an incredibly powerful tool to create opportunities, to create jobs, to create growth for the medium and long term in the country by investing in some major projects and taking on and drawing in significant international capital as well”—and it is apparently distasteful to ask for any evidence of the claims.

The Bank’s website is farcical. (Imagine applying for a $10,000 loan with as little information as the Bank gives you about the use it is making of $35 billion. You wouldn’t get far.) Sabia was appointed to replace the former board chair six months ago, with no explanation; the BIC’s CEO was sent packing on the same day, with no replacement. Sabia said a new CEO will be named “in the coming weeks.” Probably that’s even true, although the bank also thought it was about to name a new CEO in August.

The previous CEO, Pierre Lavallée, is believed to have been turfed for failing to land enough projects. He told me last summer that $4 billion in the first year of operation was a pretty good burn rate for an organization that was given a decade to spend $35 billion. Apparently the government disagreed. Now Sabia and the others were meeting reporters to announce that they will spend $10 billion in the next two or three years, which by my math isn’t a great acceleration. Sabia was able to announce more projects than the bank had ever announced before by (a) planning three years at a time and (b) not having a single actual project to announce. One’s heart goes out to the previous guy, who insisted on waiting until he had something to announce before announcing it, and can now be found on LinkedIn. These times call for bolder souls.

“It’s sometimes said that hope isn’t a plan,” Sabia said, a few times, in the manner of a man who has a plan. “This plan is the result of a serious analysis of current and potential projects. In short, this plan is real.” Great! Can we see it? Of course not.

But since hope isn’t a plan, perhaps repetition is. “Those foundations are solid because the analyses have been done,” he said, and “we have done extremely rigorous, disciplined analyses,” and “it’s built on analyses, specific projects, real projects.”

Here’s the deal. In 2016, when I was writing for another company and Michael Sabia was giving the Trudeau government free advice on economic policy, he used to say there was a vast pool of institutional funds around the world looking for returns that were even marginally better than zero. “There’s $16 trillion hanging around where the investors actually pay the government to take their money,” he said at some conference then. Pension funds like the one he ran, the Caisse de Dépôt et placement du Québec, were looking for infrastructure projects, which could offer better returns, because—Sabia normally left this part out—you could charge customers for tickets, or put a chip in their car to measure when they used a highway, or meter their energy use, or make them pay in some other way. And really all you needed to do was open a wicket with a sign saying INFRASTRUCTURE and those trillions would park in Canada.

The wicket opening was extravagant. Trudeau and nine cabinet ministers holed up at the glam Shangri-La Hotel on University Ave. in Toronto for half a day in 2016. At the time I listed their guests with the breathless credulity that used to characterize my coverage of the Infrastructure Bank notion: “The Hong Kong Monetary Authority, with $360 billion (U.S.) in assets. Norway’s Norges Bank, which may be the world’s largest sovereign wealth fund, though it’s hard to tell and the Norwegians hope to keep it that way. The Olayan Group from Saudi Arabia, with assets somewhere north of $100 billion. Singapore’s Temasek Holdings, closer to $200 billion. The Qatar Investment Authority. The Lansforsakringar, which is Swedish for ‘If you have to ask, you can’t afford it.'”

It came out later that staff from BlackRock, the world’s largest asset manager, helped write the slide deck that Trudeau and Morneau showed their guests that day, which is a little creepy, but whatever. In the end the clouds didn’t open and no part of that $16 trillion in global free money dampened the shores of Canada. This is not a tragedy nor even necessarily evidence of mismanagement: if turning on a gigantic global cash spigot were easy, probably somebody would have done it before Sabia, Morneau and Trudeau thought of it.

No matter. The Bank has quietly adopted a new business model, in which the government money goes first and everyone simply hopes the private capital will show up later. The pilot project for this approach was Montreal’s light-rail network, financed mostly by the Caisse under… I have the name right here somewhere… Ah, yes, Michael Sabia.

(Sabia once hoped similar projects could be exported around the world. In an amusing subplot that got no coverage here, an early attempt by the Caisse to make that happen after Sabia’s departure—an uninvited competitive bid to build light rail around Auckland, New Zealand—caused the entire project to collapse in confusion this summer.)

So the project list the PM, his minister, and the inevitable Sabia announced on Thursday listed no projects, named no private-sector partners, and included no process for gathering private-sector capital before signing off. The Bank is, in no sense, a Bank any more. It’s a pot of federal money, into which the federal government will dip to pursue the ends the federal government finds pleasing. This is hardly an outrage, although it’s impossible to know whether outrages lie hidden in the mechanics of a leaderless entity dear to the Prime Minister’s heart, sheltered from the purview of even the weak access-to-information laws that provide a weak light into most other government spending. Maybe this will all go better for us than WE did. Eventually we’ll find out.