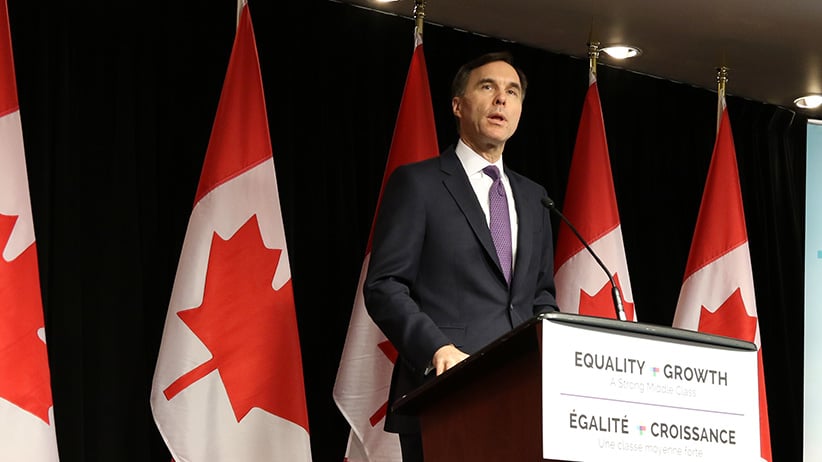 Back in 2014, when Bill Morneau was being recruited by Justin Trudeau to join the Liberals, the pension-and-benefits executive looked like the sort of Bay Street player who would bring corner-office credibility to what was then a third-place federal party striving to look to voters like a safe bet when it came to taxing and spending.

By the time Trudeau’s finance minister rose to deliver his third federal budget Tuesday, however, he was long past looking like such an obvious asset. Instead, Morneau’s selling of Budget 2018 is as much a bid for personal political redemption as it is the start of the Liberals’ attempt to set the stage for the federal election scheduled for the fall 2019.

And so, near the start of his budget speech, Morneau cast back to two years before his awful fall of 2017, which he spent, as many Canadians will recall, first battling angry resistance to his small-business tax reforms, and then fending off opposition conflict-of-interest allegations. Instead, he invoked the halcyon fall 2015, when Canadian voters gave Trudeau’s Liberals their majority mandate.

RELATED: The Battle of Bill Morneau

“They put their trust in a new government, because they knew we put our trust in them,” Morneau reminisced. “We took that trust, balanced it with sound fiscal management that includes a declining debt-to-GDP ratio, and gave Canadians the tools they needed to succeed.” That might sound like mere boilerplate, but the two halves of that sweeping claim neatly sum up Morneau’s overall message.

Sound fiscal management? He is presiding over hefty deficits—projected at $18.1 billion for 2018-19, then edging down to $12.3 billion in 2022-23. His argument for that being just fine rests on the fact that the debt is shrinking as a share of the overall economy. By that measure, Canada looks healthier than the rest of the G7 group of major economies.

Giving Canadians tools to succeed? That’s more complicated. It spans parents, the working poor, Indigenous peoples, and beyond. A good starting place is the Canada Child Benefit (CCB)—the boosted, streamlined payment for parents that Morneau unveiled in his very first fiscal plan in 2016.

Liberals clearly still see the CCB as their top policy hit. “And this summer,” Morneau made a point of reminding parents today, “two years ahead of schedule, we will ensure that the benefit increases along with the rising cost of living.” Still, indexing the CCB isn’t new news, and budgets tend to be rated based on fresh, big-ticket measures.

Perhaps the most ambitious new policy he unwrapped today is, like the CCB before it, aimed squarely at parents—an Employment Insurance benefit meant to better balance the work of caring for newborns. “With the EI Parental Sharing Benefit,” Morneau said, “two-parent families who agree to share parental leave could receive an additional five weeks of leave, making it easier for women to return to work sooner, if they so choose.”

This step was no surprise. Trudeau had repeatedly mused in public about encouraging dads to be more active in taking care of babies, through what’s been dubbed a “use-it-or-loose-it” EI benefit. It’s no token program: Budget 2018 projects the cost at $257 million in 2019-20, adding up to $1.2 billion over the budget’s five-year forecast period. The EI Parental Sharing Benefit is by far the biggest-ticket item in the budget’s wider thrust toward gender-equity goals.

Far less heralded was another key reform, this one targeted at low-income earners. A new Canadian Workers Benefit (CWB) will replace the old Working Income Tax Benefit, with $830 million in new money. The CWB will be worth, for example, about $500 more a year for a worker scraping by on just $15,000—a nice boost, and yet this move didn’t feature much in budget chatter.

The Liberals’ promised “reconciliation” with Indigenous peoples has drawn a lot more attention. In a budget with few multibillion commitments, Morneau announced $4-billion more over five years for Indigenous Services, including $1.5 billion to improve health care on reserves, arguably an under-discussed challenge, and $1.4 billion for child services, a much-debated problem, especially given recent attention to thousands of First Nations kids in foster care.

So Morneau managed to put check marks beside some major themes in a relatively modest spending package—something for gender equity, something for Canadians struggling in low-income work, something for Indigenous peoples.

And there were, as always on budget day, a scattering of interesting stand-alone items, from $750 for cybersecurity, to $230 million to combat the opioid crisis, to $2-billion for the Liberals’ “feminist international policy agenda.” Almost buried were $2.8 billion to modernize and maintain federal laboratories and $1.7 billion to cover unexpectedly high disability and health claims in the Armed Forces and the broader public service.

By the time you’re that deep in the weeds, though, it can be hard to connect separate budget moves to Morneau’s quest to rebuild his image. He won’t fail for lack of trying. At the outset of his speech, he set a tone by enthusing about 10- and 11-year-olds at a downtown Toronto school asking him awfully smart questions.

Toward the end, he touted $1.3 billion for conservation—allowing him to leave Canadiana postcard images hanging in the House air. “How many of us have gone ice fishing with our friends? Learned to swim at the end of a dock in a freezing cold lake?” he asked. “Watch our kids skip rocks on the shore, or play in the leaves on a warm fall day?”

Cute kids and the great outdoors—Morneau once seemed to be made of sterner stuff. Early on as finance minister, his image as a reserved business guy bringing management expertise to public life seemed good enough.

But last fall’s trial by fire evidently left him searching for new ways to connect. The weeks to come will show if a budget built around a few progressive priorities will be allow Morneau to reintroduce himself to Canadians—and restore his reputation as an asset to Liberals.