Federal election 2019: When is it? Who's running? And other FAQs.

What is my riding? What do the polls say? And is anything being done to stop Russia from interfering? Read our 2019 federal election FAQ. 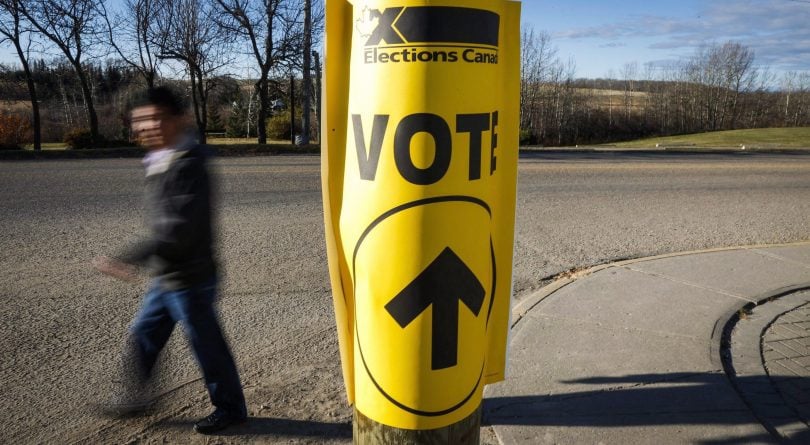 A voter walks past a polling station sign for the Canadian federal election in Cremona, Alta., Monday, Oct. 19, 2015. (THE CANADIAN PRESS/Jeff McIntosh)

When is the election?

Canadians will vote on Oct. 21.

It’s too soon to answer that question in its totality for each of Canada’s 338 ridings—that number will remain the same in 2019—but in general terms, the major parties will be the Liberals, who’ll fight to retain their majority, the Conservatives, who’ll want to unseat the Liberals to form a government, and the New Democratic Party, who’ll want to grow their distant-third-place status into something a bit more competitive with the other two major parties. The Green party will run, of course, and the Bloc Quebecois, in Quebec. Former Conservative MP Maxime Bernier’s new People’s Party of Canada will have a full slate of candidates in 2019.

In terms of leaders, of the major parties, only the Liberals and Green Party will go in with the same leader they had last time. Andrew Scheer, the Conservative who replaced former prime minister Stephen Harper, is an experienced Parliamentarian, but has never led the party into a national campaign. NDP leader Jagmeet Singh is an experienced politician, but served previously in the Ontario legislature; he was only elected to Parliament last month. This campaign will be his first as leader of the national party.

Where do I find my riding?

Elections Canada can help with that—just put your postal code in here.

What do the latest polls say?

A strong Liberal polling advantage to start 2019 gradually eroded over time, setting up a competitive 2019 race, where the Liberals would still hold a real but not massive advantage. But the SNC-Lavalin affair and the various associated mini-crises have had a measurable and sustained impact on Liberal polling numbers. The latest polling suggests that it’s the Liberals who’d most likely win the most seats if the election were held today—though perhaps not enough to win the majority.

What are some of the key issues likely to be?

In general terms, the Liberals are likely to run as a party devoted to the middle-class, the environment and defending progressive values, especially inclusiveness, in a turbulent world. This will involve accusing the opposition, mainly Conservatives, of intolerance.

The Conservatives, for their part, will hammer the Liberals on high spending, accountability and transparency, and the costs of the Liberals’ carbon-pricing plans, which are being bitterly resisted by right-wing provincial governments across the country, including, now, Alberta, under premier-designate Jason Kenney.

The NDP will probably try to reclaim the left, which was deftly seized by the Liberals in the 2015 election, as they fight for third place with the Green Party.

The People’s Party will presumably run to the right of the Tories, all while accusing them of being essentially Liberal-lite. In other words, it will all seem awfully familiar.

What voting system will we use?

Despite Liberal promises ahead of the last election, first-past-the-post—same as the last one, and all the ones before it.

What do I need to vote? Has anything changed?

Elections Canada has you covered on that front. The one big change is that voters will be allowed to use the Voter Information Card mailed to them by Elections Canada as their proof of residence when they show up at the polling station. They will still need another piece of ID, though, to prove their identity.

The system is designed to make it easy to vote—the bar for establishing your identity isn’t particularly high. Perhaps the only real interesting wrinkle is that, thanks to a Supreme Court of Canada ruling late last year, long-term ex-pat Canadians living abroad will be entitled to vote in the riding they lived in last. The Liberals also passed legislation to that effect, but even if they hadn’t, the SCC ruling took care of that.

Are robocalls legal? And why is Andrew Scheer sending me text messages? Can I make that stop?

Robocalls are certainly legal, so long as they’re properly paid for and reported as an election expense, and do not contain content that seeks to disrupt the democratic process (if you recall, the so-called “robocalls scandal” began when voters received phone calls providing false or misleading information about their local polling stations).

In a similar fashion, there’s nothing stopping parties from sending text messages to the cellphones of voters, as the Conservatives recently did when attacking carbon-tax measures in certain provinces. Voters might be annoyed by the texts, but so long as they’re done in accordance with financial and reporting requirements, they’re legitimate.

Will Russia try to interfere in the election? What’s being done to stop it?

A series of Western countries (notably including the United States) have had foreign intelligence services attempt to interfere with their election campaigns. The attacks have been largely but not exclusively linked back to Russia. Using fake social media accounts—so-called “bots”—and fake news, the foreign services have worked to amp up social division and political polarization as much as aid any specific candidate.

The Canadian government announced a plan to safeguard the integrity of our elections in January, but much of the plan will depend on the willingness of the political parties to put country ahead of their own interests, and also of the social media giants like Facebook to co-operate with Canadian officials. Neither of those things can be taken for granted. Canada does have one thing going for it, though: we still use paper ballots, a hack-proof analog technology that should at least prevent any concern over actual manipulation of voting totals.