Federal leaders debate: Who is Max Bernier and why is he here?

His policies are controversial and his odds of winning a seat are slim. Here's a look at the fringe candidate in the show and his platform 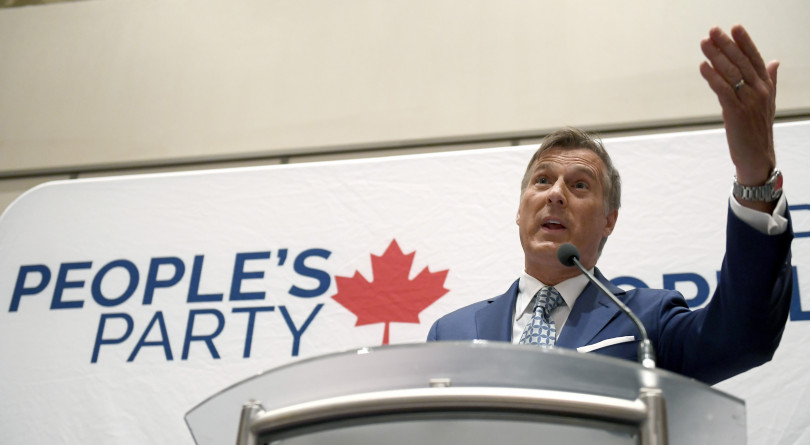 Bernier delivers an address at the PPC National Conference in Gatineau, Que. on Aug.18, 2019 (THE CANADIAN PRESS/Justin Tang)

Until recently, Maxime Bernier might have best been remembered for one of two things. First, a 2008 scandal when, as a star federal cabinet minister under Stephen Harper, he left top secret documents at the home of a girlfriend who had links to the Hells Angels. And second, losing the Conservative leadership race to Andrew Scheer.

Bernier recovered from the first scandal—despite thinking it would finish his career—and even earned a spot back in cabinet in 2011.

The second event has taken him down a potentially darker and more ruinous path.

Who is Max Bernier?

An MP from Beauce, just outside Quebec City, Bernier became something of the black sheep of the Conservative Party—a libertarian known for preaching about individual freedom and small government (See Shannon Proudfoot’s 2017 profile: How Maxime Bernier would run a federal election campaign).

In 2018, he ran for the Conservative leadership and was the favoured candidate right up until the very last round of voting that gave Scheer the surprise win. He was bitterly disappointed, later complaining about being robbed of the win by “fake conservatives” set up by the dairy lobby, which he opposed.

Bernier quit the Conservative Party in August 2018. “I have come to realize over the past year that this party is too intellectually and morally corrupt to be reformed,” he said. “Andrew Scheer keeps talking about his ‘positive Conservative vision.’ But nobody knows what that vision is.”

(Scheer’s response: “Since losing the leadership, Maxime has repeatedly demonstrated he is more interested in advancing his personal profile than advancing Conservative principles.”)

Bernier turned around and started the People’s Party of Canada (PPC), a group with nativist tendencies aimed directly at exposing the Conservatives to a two-front election war—the Liberals on the left and the PPC on the right, robbing it of once safe votes. What better way to get back at the people who rejected you?

Why is Bernier in the commission debate?

Bernier was a late addition to the commission debate, only added to the slate after challenging the commission’s initial decision not to include him on the grounds that his party had no MPs elected under its banner (Bernier was elected as a Conservative) and barely any support.

The commission looked at four ridings where the PPC thought it had a legitimate shot at winning. The pollster it hired found that at least 25 per cent of people in each riding would at least consider voting PPC. This was a controversial test, as Aaron Hutchins wrote about the process:

“The path the commission took to its decision has come into question. Using the lowest recent historical bar to win a riding, and then polling for the highest possible vote consideration for the PPCs, has divided pollsters. And what constitutes a ‘legitimate chance’ at getting elected remains a live issue.”

The 338Canada vote projection this week has the PPC winning 0.7 seats in the election.

What does the People’s Party of Canada stand for?

Out of the gate, Bernier sold his party as one of small government conservatism, but his pitch quickly became more focused on identity politics and so-called “Canadian values”, wrote John Geddes in September 2018 (What is Maxime Bernier and his People’s Party selling?)

The party has attracted the most attention for policies aimed at restricting immigration and refugees and opposing multiculturalism.

Here are some of the party’s main platform planks:

CORRECTION: Oct. 7, 2019: An earlier version of this story misstated the seat projection for the PPC.