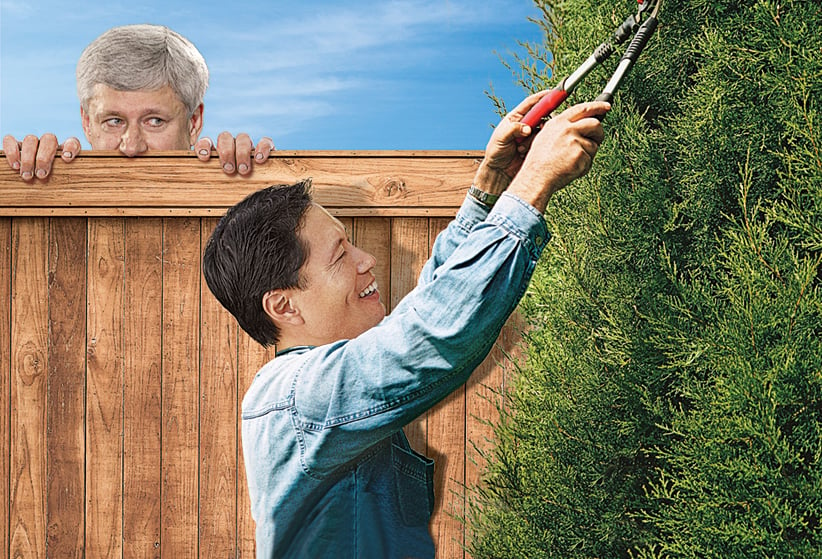 Stephen Harper’s leadership philosophy is clear: In troubled times, it is the duty of the Prime Minister to rally the people of Canada, bring us all together—and provide us with many, many reasons to freak the hell out. In such matters, Harper takes inspiration from Franklin Roosevelt: The only thing we have to fear is this exhaustive list of terrifying things to fear.

Related: The Conservatives, the party of manly men no more

Alas, it can be hard to keep track of everything we’re supposed to be petrified of. So here is an alphabetical reminder of the threats to our country, according to the PM. Tape it to the fridge and consult it, should you ever begin to feel that things in Canada are going semi-okay.

Coalitions. The Conservative leader has been consistent on this one: Nothing represents a greater menace to the future of the country we love than the chilling prospect of our elected representatives cooperating.

Deficits. As Harper tells it, a budget shortfall will instantly “wreck” the Canadian economy. Sure, Harper ran deficits himself—but his were different. Think of it in terms of a soap opera, where the good guy is invariably revealed to have an evil twin. The bad egg is usually distinguished by a menacing facial characteristic of some kind. And look, whaddaya know: Trudeau’s proposed deﬁcits are totally rocking a goatee.

Elites. What a tragedy it would be for Canadians to heed the words of those who, through education, effort and accomplishment, have at least some clue of what they’re talking about.

Enemies of Israel. This subset includes both genuine and imagined enemies of Israel, up to, and including, people who have tweeted something snarky about Seth Rogen.

Europe. Once a lovely continent known for its tourist attractions and abundant berets, Europe has been reduced by Harper to a threatening symbol of economic turmoil—a contagion that must be quarantined. Do not visit Europe the continent. Do not listen to Europe the band. DO NOT PRONOUNCE EUROPE THE WORD. It’s like Beetlejuice: Say it out loud three times and—poof!—the Greek finance minister will appear in your kitchen and max out your credit card.

Immigrants. The Conservatives are vowing to create a tip line so Canadians can rat out their neighbours to the RCMP for “barbaric cultural practices.” I say it’s about time: My neighbour Brian is of Asian descent and, one afternoon, I saw him barbecuing with his shirt off. Not in my Canada, señor.

Harper’s message is clear: People who come here from other countries are to be welcomed and accepted, unless they say, do or cook anything that seems—and I’m paraphrasing here—“kinda weird.” If nothing else, this campaign has proved that Harper would have made a great dad in the 1950s. Now, now, Beaver. Your school chum says she’s a grateful immigrant following her cultural traditions. But wouldn’t it be doing everyone a favour to have her detained by police, just in case?

Marijuana. Harper tells us weed is “infinitely worse” than tobacco. And he’s right. Smoking kills 40,000 Canadians a year—but that’s nothing compared to the staggering cost of potheads sitting quietly on the couch for three hours.

Niqab. As a Conservative, the PM is a reliable defender of individual freedom, except when confronted by a clear and present threat to national security, such as a couple of women choosing to cover their faces. The veil is terrifying, because there could be anything under there. You might find a person. You might find a different person. Or maybe three young boys stacked on top of each other, trying to order a beer at a strip club. It is therefore in Canada’s best interest to rely on Stephen Harper to set out a national dress code: Ill-fitting blazers for all! Also, remember the haircut you got as a seven-year-old? You now have to keep it for life.

In Harper’s world, we should be suspicious of everyone—except, apparently, political leaders who spent the past decade telling us to focus only on the economy, but who are now suddenly telling us to wet our pants over veiled ladies.

And let’s remember: Harper has a perfect track record at identifying cultural threats. He warned that same-sex weddings would gravely undermine the institution of marriage. Had we listened to him, we wouldn’t today be watching helplessly as millions of Canadians lobby for the right to marry their appliances.

Related: This or that? Find out where you stand this election with the Maclean’s Policy Face-Off Machine

Rival political leaders. According to Harper, Canada is the “greatest country in the world”— but not so great that it could survive a routine change in government without being transformed overnight into a nightmare dystopia defined by economic chaos, civil strife and stoned, veiled toddlers.

Science. Friends, don’t listen to all those lab-coated nerdlingers out there: The environment is totally, 100 per cent fine. * North pole explodes *

Terrorists. For Harper, it’s not enough to be afraid of the few who actually commit acts of terror. We must also be fearful of potential terrorists. And the beauty is: Anyone could be a potential terrorist! Your neighbour. Your veterinarian. Did your barista just give you a weird look? There, there – let Uncle Steve comfort you by pointing out that your cab driver also seems suspicious.

Harper’s message to voters is clear: On Oct. 19, be guided not by your head or your heart, but by the hairs on the back of your neck.