Five takeaways from the Kielburgers' testimony

It was a different sort of WE day in Ottawa, as the charity's co-founders appeared before the House finance committee. Here’s what you need to know. 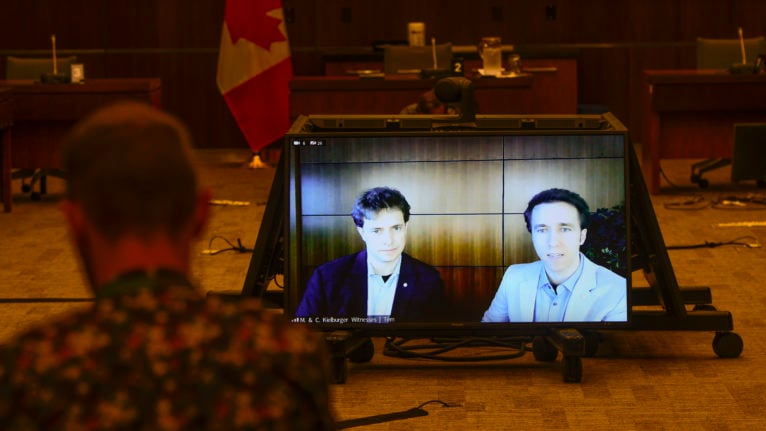 There were no tough questions on the name of the charity itself, which could understandably cause confusion in how to read particular statements: “We (WE?) regret that WE (we?) didn’t recognize how this decision would be perceived.” Or: “WE (we?) wish that we (WE?) had never answered the phone.”

A marathon House finance committee hearing on Tuesday featured the testimony of a former board chair of WE Charity, Michelle Douglas, and a four-hour Q&A with co-founder brothers Craig and Marc Kielburger.

The afternoon-long videoconference yielded nuance, conjecture and, unsurprisingly, bickering as MPs continue an investigation into the Liberal government’s decision to award a contribution agreement to WE Charity for the administration of the dead-on-arrival Canada Student Service Grant program.

Prime Minister Justin Trudeau, who is facing his third ethics investigation over the foofaraw, will add his own testimony to the pile on Thursday.

Here are five key takeaways from the five-hour circus:

1. A Parliamentary committee is an infuriating forum for parsing questions of fact

If it weren’t for the grace, chairmanship skills and occasional shouting of Liberal MP Wayne Easter, the committee hearing could at times have turned into a brawling disaster.

MPs can perhaps be forgiven for falling into partisan patterns, but this sometimes led to curious veerings off course. Precious minutes were spent litigating details such as the date of Finance Minister Bill Morneau’s testimony to the committee—which was only six days ago. Conservative MP Michael Cooper, for his part, was interested in the means of transportation Morneau’s family might have taken to get from the airport to WE accommodations during trips they have since reimbursed the charity for. One of the proffered methods: “motorized canoes.”

In addition to the usual political hyperbole were MPs’ attacks on each other for their questioning styles, phony points of order and confrontational debates with witnesses that left questions unanswered and tempers flaring.

New Democrat Charlie Angus and Conservative Pierre Poilievre were especially guilty of overplaying their hands, with the latter causing Easter, three hours into the Kielburgers’ testimony, to raise his voice and threaten to suspend the meeting altogether.

2. But the Kielburgers missed an opportunity to gain public sympathy

Canadians watching the committee testimony will arrive at their own opinions on the sincerity of the Kielburgers, their cause and their explanations over a gruelling four hours.

It was hard to miss, though, their frequent chuckling at MPs’ questions. As laughable as some of the politicking may have been, there was a constant flavour of condescension in the responses. On Craig’s face, as he extolled his own virtues, was a smirk reminiscent of Trudeau’s—a smirk, accompanied by a smize, that seemed to ask: “How dare you question my righteousness?”

The Kielburgers expressed delight at the opportunity to respond to committee members’ questions and dispel what they called media “mischaracterizations” and “misinformation,” despite their organization’s reported reluctance to address journalists’ questions over the past month and earlier. Your correspondent could not find any examples of open-ended “accountability” style interviews given to the press by either brother in recent years.

Now a “beautiful” program, with “beautiful” partnerships, is dead in the water. Inaccurate political and media statements, the brothers said, are “killing” their charity and “harming young people in this country in the process.” Will their committee performance convince prospective donors to reverse that trend?

Even as they were dealing with a particularly prickly Poilievre, will it help their case that Marc’s exasperated response was that they’d been sitting at the committee for longer than “anyone in the SNC-Lavalin or Duffy affairs”?

WE Charity. ME to WE Foundation. ME to WE Social Enterprise. WEllbeing Foundation. Imagine1day. WE 365 LP, and at least two other entities that sound like the prototype numbers for do-gooder androids. There is such a long list of entities in the WE umbrella that the former chair of WE Charity’s board, Michelle Douglas, wasn’t confident enough to say how many.

The brothers clarified that they need to incorporate in every country where they operate. And under Canada Revenue Agency rules, charities can’t operate as businesses in the administration of “social enterprise,” said Craig. So they had to “build a labyrinth to adhere to Canadian laws and regulations.”

Marc later explained the two started the charity when they were children. He said it’s like building a house. “You add a wing, and add a skylight, and add a swimming pool for your kids,” he said. “This wasn’t out of malice.” A global consulting firm, Korn Ferry, has been hired to help streamline the structure.

The Kielburgers said the government was fully briefed on the fact they planned to use a separate nonprofit entity, the WE Charity Foundation—which had been set up to help limit liability—as a party to the contribution agreement. (In the agreement, WE agreed to full liability for participants in the program.)

4. Transparency issues plagued the charity even before the current controversy

Former board chair Michelle Douglas, in her testimony, described concerns around the executive team’s refusal to provide substantial financial records that would allow the board to fulfill its functions.

“I did not resign as a routine matter or as part of a planned board transition. I resigned because I could not do my job. I could not discharge my governance duties,” she said in an opening statement.

She described in March, the executive—including Marc and Craig—had not fulfilled requests for evidence, reports or data that could support their rationale for laying employees off during the pandemic. In a March 25 phone call, she alleged that Craig asked for her resignation. She gave it. Most of the rest of the board left the organization shortly thereafter, although Craig claimed in committee that this could be explained by an existing “renewal” process.

Douglas said she had also raised concerns, in early 2018, about the WE Charity Foundation. “The board was never satisfied that the operation of this foundation was in the best interests of the charity or its various stakeholders,” she said, adding her understanding at the time was that the organization was intended to hold property. In their testimony, the Kielburgers dismissed the real estate claim as an inaccuracy, saying there were “multitudes of purposes” for such an entity.

Although Douglas said nothing in the organization’s operations caused her “deep concern,” she described a climate characteristic of “founder-led” organizations: “We were always striving to get greater insight into the work.”

5. Transparency issues have worsened the scandal for Trudeau

The first time Marc Kielburger heard the figure $912 million—a figure repeated over and over during the past month—was when it came out of the Prime Minister’s mouth, he told the committee. It’s not the only dollar figure that has come to plague the government without apparently having a basis in fact.

The contribution agreement provided to the committee on Monday details the actual amounts in the agreement. Up to $500 million could be disbursed to students in grants for volunteer hours. Up to $43.5 million would go towards program fees incurred by WE Charity.

According to Marc, based on the organization’s modelling the ultimate cost would have likely been in the range of $200 to $300 million. WE would not have gained any profits, they claimed—the program fees were to cover “summer teachers,” or supervisors, technology grants for students in rural areas, translations, a call centre, insurance, etcetera, etcetera.

The Kielburgers further asserted that they incurred a $5 million loss when the program was cancelled.

If the Prime Minister had been clear on any of the above, could he have mitigated the impression that this was not only a rush job and a personal conflict-of-interest problem, but a case of cronyism and “friends helping friends,” too?

On the ethics front, no interactions between the Kielburgers and government ministers came to light for the first time during the testimony. Many of the specifics to do with conflict-of-interest concerns around Trudeau, Morneau and their families—speakers’ fees for Trudeau’s family members and a bill for Morneau’s trip to Ecuador, among other things—were still to be provided to the committee. Trudeau testifies on Thursday.