Flaherty got his securities deal by saying he'd go it alone 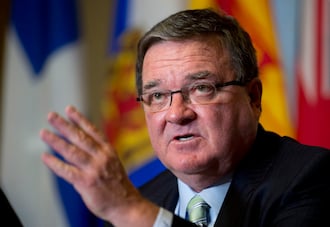 There’s nothing like the prospect—or should that be the threat?—of unilateral federal government action on a contentious issue to light a fire under negotiations with the provinces.

That has to be one of the major lessons taught by Finance Minister Jim Flaherty’s surprise announcement today that the federal, Ontario and British Columbia governments have finally, after years of setbacks and delays, agreed to set up a cooperative regulator for securities markets.

This was not, of course, the landmark creation of a true, coast-to-coast Canadian regulator for stock markets that Flaherty has struggled for years to achieve. But it looks like a solid stride on the path to that sensible, though elusive, goal. Much depends now on how other provinces respond.

Flaherty set out in earnest in 2009 to create a single regulator, an idea long advocated by many economists and business experts frustrated by Canada’s hodge-podge of provincial stock market commissions. But he faced stiff resistance from some provinces, especially Quebec and Alberta. And then the Supreme Court of Canada dealt him a severe blow in 2011, when it ruled his plan overstepped federal jurisdiction.

Still, that court ruling left Flaherty a strategic opening that seems to have led to today’s breakthrough. While the judges said provinces have jurisdiction over day-to-day securities market regulation, they also ruled that Ottawa could step in to regulate “systemic risks.”

So Flaherty switched to simultaneously pursuing two options. He continued to try to coax provinces into voluntarily joining a national regulator, but also began drafting a law allowing Ottawa to regulate some of those broader risks the court mentioned, including murkier corners of capital markets like over-the-counter derivatives, often blamed for the much of the 2008 global credit meltdown.

If anyone doubted that he was serious about imposing this new level of federal oversight on top of the already crowded provincial regulatory scene, signals coming from Flaherty’s top officials this past summer suggested, not just a readiness to act alone, but a growing enthusiasm for that option.

Douglas Hyndman, who heads the Canadian Securities Transition Office that Flaherty set up to push this file, even told Maclean’s in an email that the Supreme Court, by directing federal policy-makers to consider regulating systemic risks, shifted their attention “precisely where Canada needs to do a better job to get regulation right.”

If any provinces thought the feds might take ages to figure out how to proceed along those lines, Hyndman had news for them. “Our planning horizon,” he said, “is in months, not years.”

Today’s joint news conference on Parliament Hill by Flaherty, Ontario Finance Minister Charles Sousa and B.C. Finance Minister Michael de Jong, was mostly a mutual back-patting session about the virtues of cooperation. But there were also a few telling references to how the ominous possibility of Ottawa going it alone factored into their bargaining.

At one point, Flaherty mentioned  “we have been proposing to bring in federal legislation that would deal with the issue of systemic risk,” before adding politely, “This is much better.” And de Jong alluded, rather diplomatically, to his understanding that Ottawa felt that it had “an obligation to act legislatively” and add “another layer” on top of provincial regulation. “This precludes the need for that,” de Jong said, with a palpable air of relief.

The deal unveiled today aims to have the new regulator up and running by 2015. It will be headquartered in Toronto, but with branch offices in any province that participates. With just Ontario and B.C. aboard, it would cover about two-thirds of Canadian capital markets, since Toronto has by far the country’s largest stock market and Vancouver its second biggest.

How many other provincial governments decide to sign on remains to be seen. Quebec isn’t about to bend, and Alberta seems only slightly more likely to shrug off past reservations and join the club. “Quite frankly I expect that a number of the other provinces and territories fairly quickly will climb on board and accept this proposal,” Flaherty said. “It’s in their self- interest to do so and not be left behind. And we’ll see [on] a couple of the others that are more intransigent how that works.”