For a second there, it sounded like we'd all be state-run media

Politics Insider for Feb. 4: A rookie minister backtracks for the first time, Trudeau prepares for an Africa trip and the PBO chimes in on the carbon tax 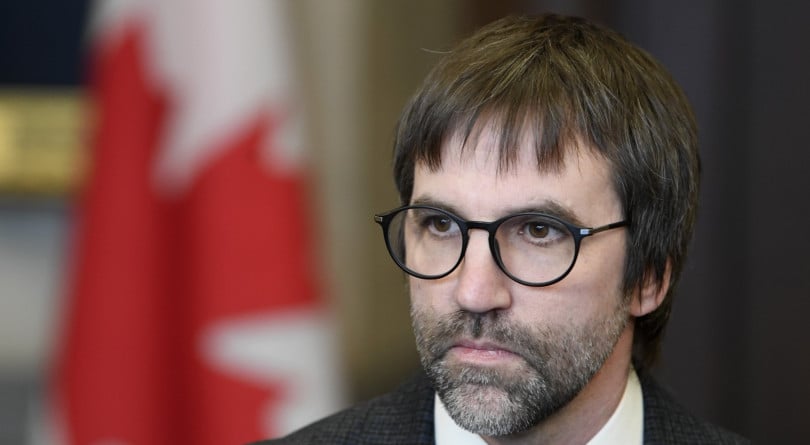 Minister of Canadian Heritage Steven Guilbeault speaks with the media in the Foyer of the House of Commons in Ottawa, Monday Feb. 3, 2020. (Adrian Wyld/CP)

Heritage Minister Steven Guilbeault learned over the weekend that his portfolio is a minefield, and his job is to be a human minesweeper. Guilbeault told CTV’s Question Period that as part of a sweeping overhaul of federal broadcasting and telecom laws, the new rules would force media organizations to apply for a licence of some sort.

Expanding eligibility for MAID should not be rushed: Jane Philpott and Jody Wilson-Raybould joined forces in Maclean’s to urge caution as the federal government considers expanding Canada’s medically assisted dying law beyond those for whom death is in the “reasonably foreseeable” future. A Quebec court ruling forced the government’s hand and slapped a tight timeline on amending the law—but Philpott and Wilson-Raybould (the former ministers of health and justice, respectively, when the law was written) say lingering questions about the right legal balance can’t be resolved hastily.

Many doctors are willing to expedite the natural process of dying, given their traditional role to relieve suffering. There is, however, a qualitative and ethical distinction between hastening a death which is already drawing near, and ending a life which is expected to persist. This is no small divide. It is incumbent on lawmakers to consider the implications this may have for clinicians, and their willingness to participate in a more expansive framework for assisted dying.

Trade Minister Mary Ng is off to Africa for a week-long, three-country tour. Ng will head to a mining conference in South Africa, and then tour Ethiopia and Kenya with Canadian clean-tech companies. In Ethiopia, Ng will join up with Prime Minister Justin Trudeau, who will attend the African Union summit. Trudeau will also head to Senegal. But there’s subtext here.

The PM badly wants to win a non-permanent seat on the UN’s security council. Canada used to win two-year terms about once a decade, but hasn’t sat at that table since 2001. African votes are seen as key to victory against Norway and Ireland, Canada’s competition for a “Western European and others” seat. (The “others” also include Australia, New Zealand and Israel.)

Plans are coming together to airlift healthy Canadians trapped in the quarantined city of Wuhan, the epicentre of the novel coronavirus outbreak in China. There’s no firm timeline for the evacuation, but federal officials said 280 Canadian passport holders and 24 others have requested a spot on a chartered flight. Those who do get a spot will be flown to CFB Trenton, where they’ll be separated and monitored for 14 days before they can return home. Chinese officials will allow Canadian permanent residents with kids to board the flight.

Two sources “close to the Prime Minister” told CBC News that Teck Resources’s $20-billion oil sands project could get a green light with a big condition: Alberta would have to pass a law that forces the province to hit net-zero carbon emissions by 2050. As if on cue, Teck released its plan yesterday to—wait for it—achieve carbon neutrality by 2050.

The Privy Council Office, perhaps not surprisingly, regularly asks pollsters to assemble focus groups to test the pulse of the nation. A report recently published online, based on polling from last summer, dug into Liberal climate policy. Focus groups in Mississauga, Ont., Barrie, Ont., Miramichi, N.B., and Winnipeg expressed skepticism and confusion about how the federal price on carbon actually works. But they all broadly supported the ban on plastics that’s in the works.

This’ll make headlines: Today, the Parliamentary Budget Office will publish a report with this unsexy title: “Reviewing the Fiscal and Distributional Analysis of the Federal Carbon Pricing System.” Somehow, the PBO never has to work too hard on getting anyone’s attention, especially when the climate file is under the microscope.