Is Scheer coming off as too hard? Is Trudeau now fighting on two fronts? Has Singh found his key campaign asset? 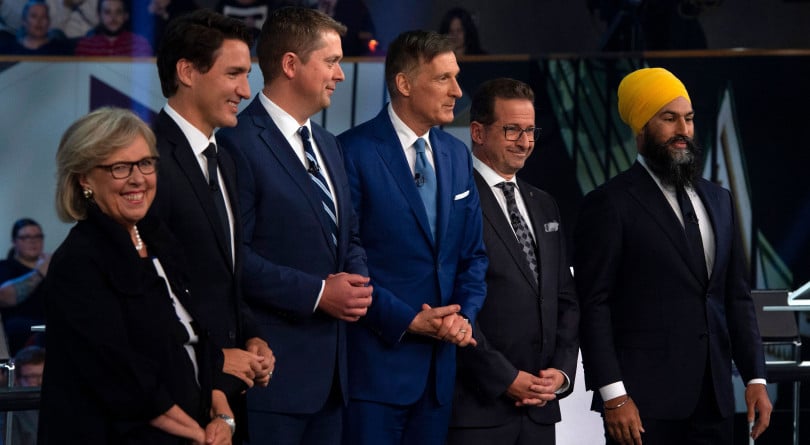 May, Trudeau, Scheer, Bernier, Blanchet and Singh post for a photo before the Federal Leaders Debate, on Oct. 7, 2019 (Sean Kilpatrick/POOL/AFP/Getty Images)

The leaders’ debate held last night in Gatineau, Que., across the Ottawa River from Parliament Hill, was often chaotic, sometimes disjointed—and not infrequently revealing. Here are four key takeaway questions to ponder on the morning after, one for each for the top three leaders according to most polls:

Did Conservative Leader Andrew Scheer come out swinging too hard to convey that ineffable quality known as “prime-ministerial”? When it comes to Justin Trudeau, Scheer has shown a propensity for unusually tough talk. He quickly called for the Prime Minister to step down—some critics said too quickly–when the SNC-Lavalin affair caught fire last winter. His response to Trudeau’s blackface photos surfacing earlier in this fall’s campaign was to immediately call his rival “not fit to govern.” And in the first English-language TV debate, Scheer moved quickly to an extreme attack: “He can’t even remember how many times he put blackface on because the fact of the matter is he’s always wearing a mask,” he said. “Mr Trudeau, you are a phoney and you are a fraud and you do not deserve to govern this country.”

Did Liberal Leader Justin Trudeau signal, by taking repeated aim at Jagmeet Singh, that the NDP leader has him worried? Trudeau was expected to have save his most aggressive moments for Scheer, easily his closest adversary. Still, Singh’s personal campaign style is generally being rated higher than the NDP poll numbers show so far. That might explain why Trudeau even risked criticizing the first visible-minority leader of a major federal party, a turban-wearing Sikh, for not declaring he’d go to court if necessary to combat Quebec’s Bill 21, the law that bans some provincial public servants from wearing religious symbols on the job.  “Mr. Singh you have spoken very eloquently on discrimination and fought against it all your life,” Trudeau said. “And that is why it’s so surprising to have heard you say, along with every other leader on this stage, that you would not  intervene in the question of Bill 21 in Quebec.”

Does NDP Leader Jagmeet Singh, maybe along with his debate-prep team, think his sense of humour is emerging as a key campaign asset? Singh has distinguished himself throughout this campaign with his natural tone. It contrasts him with Scheer, who sometimes comes off as a little awkward, and Trudeau, who sometimes lapses into a studied speaking style that’s more oratorical than conversational. In the debate, Singh injected most of the lighter moments. When Trudeau slipped up by calling him Scheer, Singh laughed and interjected, “I’m very different than Mr. Scheer.” (Trudeau quipped that they “look so alike.) Not all of Singh’s attempts to entertain come off as truly spontaneous, though. When Trudeau and Scheer clashed on climate change, Singh fired off a one-liner he clearly had loaded for just such a moment: “You do not need to choose between Mr. Delay and Mr. Deny.”

Did Green Leader Elizabeth May shift too early to musing about a possible, or maybe probably, minority outcome? May is not, all polls confirm, really in the running to become prime minister. Her Green party is hoping to boost its seat count from the two ridings, both in B.C., it held when Parliament dissolved for this election. But Jack Layton, the late NDP leader, came to stress the need to at least talk to voters on the campaign trail like you planned to be PM. That’s what they’re listening for. But May shrugged that aside in the debate. She told Scheer “you’re not going to be prime minister,” and at another point, predicting a Liberal victory, implored viewers “voting for Green MPs is your very best guarantee, Canada, that you don’t get the government you least want”—presumably meaning another Trudeau majority. She’s campaigning explicitly to hold the balance of power after Oct. 21.