I pointed the Inklessmobile toward Montreal today and two hours later I was at the outskirts of the great city. An hour after that I was downtown, having spent most of the intervening time parked on the Décarie Autoroute. I caught up with François Legault at a cocktail reception for supporters of his upstart Coalition Avenir Québec party. He gave a short speech and leapt into the crowd to shake hands, at which point I took this relatively good Instagram photo: 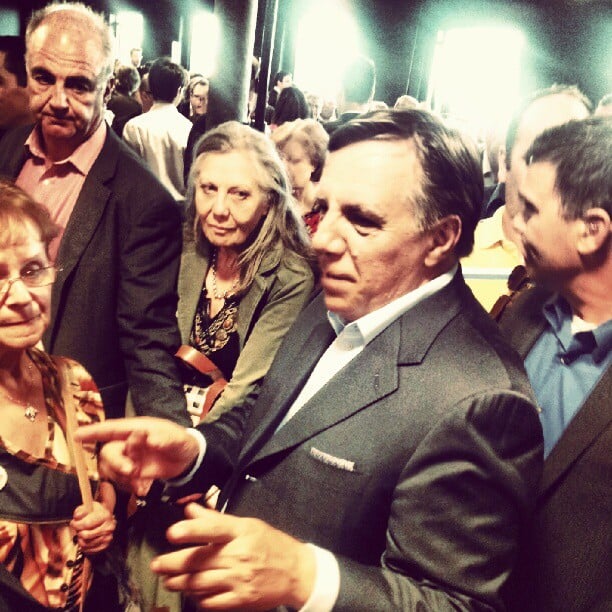 He was not in fact doing his Fonzie impression. Onward. It’s a peculiar moment for Legault, the former Parti Québécois cabinet minister who’s formed a vaguely centre-right party that hopes to appeal to people who are fed up with the old fights. What’s happening is that he seems to be succeeding — but perhaps not enough. The front-running PQ is stable or dipping slightly, the Liberals are wilting especially among francophone voters, and Legault is gaining — but he’ll need to pick up the pace of those gains if he’s to close the distance that separates him from Pauline Marois’s PQ. And with the debates behind, there’s not much anyone can do to change the race’s momentum.

Legault does what he can. Today he gave interviews to two English-language news outlets; tomorrow he’ll be phoning in to popular English radio morning man Terry DiMonte’s show. He’s playing a long shot here: that a former separatist rising star can peel away enough anglophone and allophone voters to — well, it seems nutty even to finish that sentence. What? Take Westmount from the eternal Liberal incumbent Jacques Chagnon?

Can’t win if you don’t play. He added a brief coda in English to a stump speech that was otherwise empty cheering (“We have six days left before we start cleaning things up”). The English bit was an attempt to reassure non-francophone voters: “Sovereignists, federalists, forget that,” he said with a wave of his hand. “We’ll be together and we’ll be proud to be Quebecers.”

Legault will, by late Thursday morning, have had enough of playing the long odds and head back out to where the CAQ has the most growth potential:  Quebec City, Saguenay, and the North and South suburbs of Montreal. I would recount the day’s assorted gaffes and mishaps in every party’s campaign, but suffice it to say that nobody is running a flawless campaign or anything close. The stakes are too high, the outcome too hard to predict. It’s a raggedy-assed, unlovely campaign, but it’s fascinating to watch, and I’ll be in and around Montreal for the rest of it.