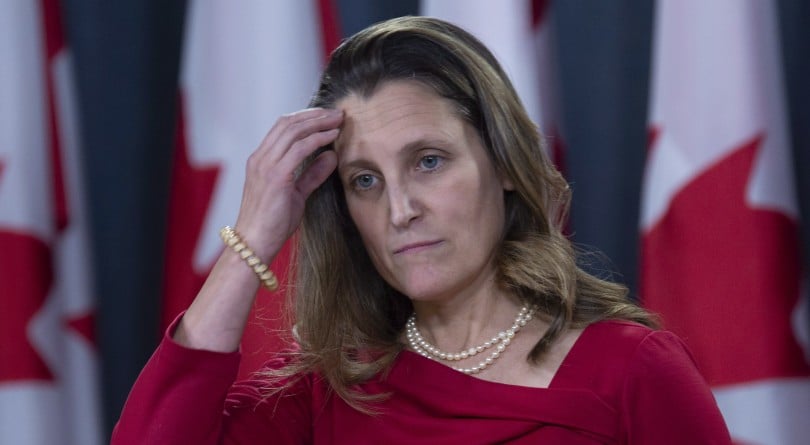 Minister of Foreign Affairs Chrystia Freeland speaks with the media during a news conference in Ottawa on Wednesday, Dec. 12, 2018. (THE CANADIAN PRESS/Adrian Wyld)

It was excruciatingly clear that Foreign Minister Chrystia Freeland did not want to risk letting a wrong word slip when she was asked on Wednesday about U.S. President Donald Trump’s statement, in an interview with Reuters, that he might intervene in the U.S. case against Huawei chief financial officer Meng Wanzhou, if doing so would help him in trade negotiations with China.

Freeland was asked twice at a news conference just off Parliament Hill about Trump’s comment about Meng, who was arrested Dec. 1 in Vancouver on the request of U.S. authorities who want her extradited to face charges having to do with violating trade sanctions against Iran. The prominent Chinese executive was released on bail Tuesday night, and must stay in Vancouver for what could be years of legal wrangling over the extradition request.

Both times Freeland was asked about what Trump had said, she seemed to individually consider each syllable of her long answer. (Recall that Trump once said of Freeland, in the heat of the NAFTA renegotiations, “we don’t like their representative very much.”) Still, she did get around, in both tortuous responses, to saying that any comment that seemed to politicize the highly sensitive extradition process was a problem.

READ MORE: For once, Canada didn’t cave in to Huawei

Trump told Reuters when asked about the Meng case: “If I think it’s good for what will be certainly the largest trade deal ever made—which is a very important thing—what’s good for national security—I would certainly intervene if I thought it was necessary.” In full, here’s how Freeland unfurled her second answer to a reporter’s question on Trump’s comment. (She alludes repeatedly here to Justice Minister Jody Wilson-Raybould, who is also the federal attorney general):

“As I said, with regard to remarks that have been made, in the first instance, it will be for Ms. Meng’s lawyers to judge whether it is pertinent for them to refer to remarks made by any officials in their defence of her. It will then be up to Canadian judges to determine the relevance of any submissions by Ms. Meng’s lawyers.

“Our attorney general has issued a very clear statement about how seriously she takes extradition proceedings, and where her responsibilities lie, and she has been very clear in that statement that she may be called up to make a judgement in the event that a Canadian court, at the end of the process, judges that the legal threshold for extradition has been met. At that point there will be a judgement for Canada’s attorney general to make that is a very serious judgement, and she has laid out very carefully, and I think very well, the situation.