Ethel Blondin-Andrew, this year's Maclean's Lifetime Achievement Award winner: 'The way you treat people is the way that you will be remembered' 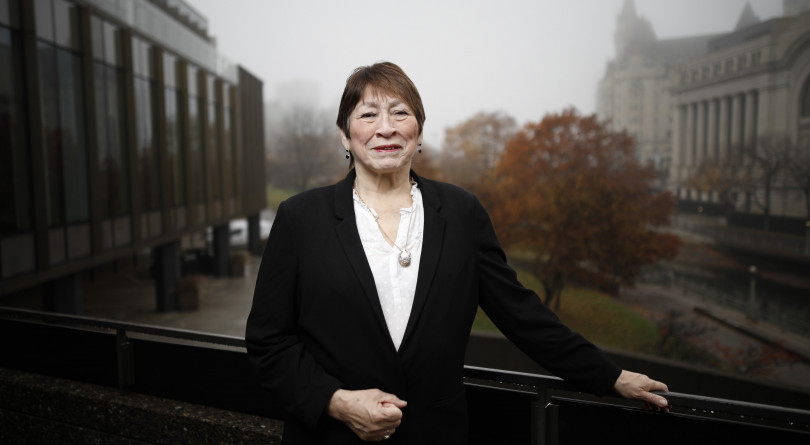 Ethel Blondin-Andrew’s story might easily have been one of many turned short and tragic by the grim realities of the residential school system for First Nations children. Born in 1951 at Tulita, N.W.T., where the blue of the Great Bear River and the brown of the Mackenzie River meet, Blondin-Andrew was sent north by freighter plane to Grollier Hall in Inuvik in 1959. But she soon fled the Roman Catholic school, which later became notorious for the sexual abuse of its students, to live in a “tent town” with other runaways.

In an interview, Blondin-Andrew, recipient of the 2019 Lifetime Achievement Award for former MPs given out every year by Maclean’s, said she didn’t mind life in the tents. Having grown up in a traditional Dene family, she was used to it. “My cousin had goose soup and bannock,” she says. “It was fine for me.” A few months later, she made her way home to visit when her mother was in hospital. “My mother was very upset, and my dad,” she recalled in an interview. “They decided I wasn’t going to go back.”

At 12, Blondin-Andrew needed to be hospitalized in Edmonton for back surgery, where doctors discovered she also had tuberculosis. During long months in recovery, she listened to music and learned embroidery and sewing. After she returned to Fort Franklin, N.W.T., on Great Bear Lake, where her parents were then living, she was chosen for a leadership program in Fort Smith for promising students. “The rest is history,” she says with a laugh.

But it is. She went on to earn an education degree at Edmonton’s University of Alberta, and worked in several Northwest Territories communities as a teacher, and then a specialist in Indigenous languages, before joining Public Service Commission of Canada, which took her to Ottawa. By 1986, she was back north in Yellowknife as an assistant deputy minister. She jumped to politics in 1988 as a Liberal and captured the Western Arctic riding—becoming Canada’s first Indigenous woman member of Parliament.

She would hold her seat through five consecutive elections. After the Liberals returned to power in 1993, Prime Minister Jean Chrétien named her Secretary of State, Training and Youth. Despite her cabinet responsibilities and long tenure on key House committees, when Blondin-Andrew is asked what stands out for her from her years in Ottawa, she focuses on always making time for visitors from the North, or from Indigenous communities anywhere in Canada. “I didn’t want people to come to Ottawa and not be able to see a minister or someone from our party,” she says. “The way you treat people is the way that you will be remembered.”

Defeated in the 2006 election, Blondin-Andrew returned to head the organization that oversees the land claim settlement her Dene nation signed with the federal government in 1993. She held that position for nearly a decade, and now lives in Norman Wells, not far from Tulita, where she grew up. Her childhood memories are burnished. “We played ball at night. We went hiking in the bush, picking berries, always busy, always something. We had wonderful dances at our community hall. My dad was a fiddler, so we used to go to all the adult dances, hide under the tables,” she says.

But life in the Northwest Territories is hardly idyllic. Blondin-Andrew worries about young people whose concept of life is shaped today by what they see online. Addiction to alcohol and other drugs is a major problem. She is active in a program that aims to give Dene youth traditional experiences. After only a few days camping in the bush, she says they are are visibly changed. “We see that people are walking better, moving better, more coordinated, and people just get better sleep. There aren’t all the modern distractions,” she says.

Climate change is another daunting worry. Blondin-Andrew sees the permafrost melting, erratic weather changing seasonal patterns that formerly seemed eternal. Still, her perspective on the global crisis that is caused mainly by fossil-fuel burning is complicated by the fact that oil production has been the economic mainstay of Norman Wells since the 1920s. How to balance economic and environmental imperatives? “I struggle with that and other people struggle with that,” Blondin-Andrew says. “If you don’t struggle with it, then you’re a very one-sided individual.”

She prides herself on having followed a pattern throughout her life that doesn’t include “succumbing.” Still, after all the obstacles she’s overcome, Blondin-Andrew sees that, for her people and the Canadian North more broadly, the toughest challenges may still lie ahead.