That first day was lovely and it has been a decent first week, but the fun is just about to begin 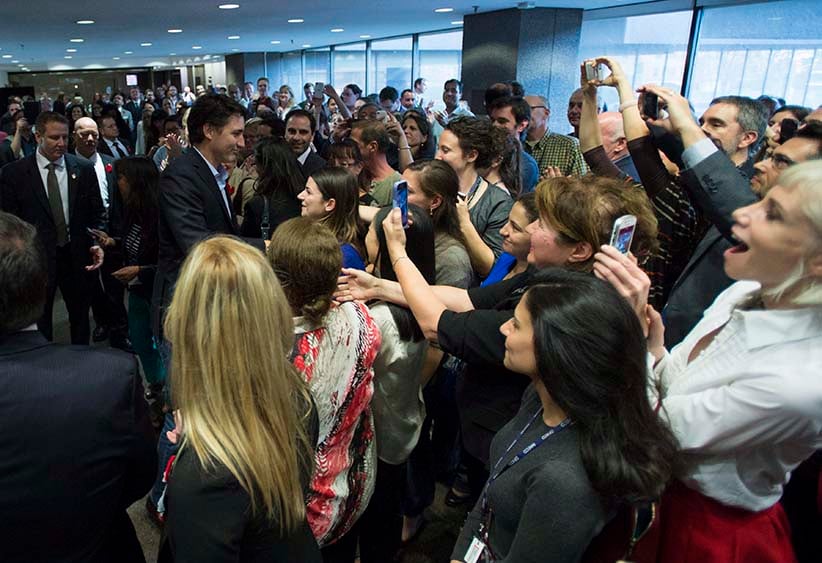 Prime Minister Justin Trudeau greets Department of Foreign Affairs staff who pack the lobby of the department’s headquarters in Ottawa on Friday, Nov. 6, 2015. Trudeau spoke following a meeting with his cabinet. (Sean Kilpatrick/CP)

The Prime Minister’s Office announced this afternoon that the new Prime Minister will visit Buckingham Palace next week to formally meet Her Majesty Queen Elizabeth II, or be “received in audience,” as it is officially described. That will, presumably, be fun for everyone involved. And with any luck, Justin Trudeau will do Michelle Obama one better and greet Her Majesty with a full, two-armed hug, cavalierly invigorating the early debate about his manner and leaving etiquette fetishists breathless.

It was also revealed this afternoon that the mandate letters issued to each minister—the official statements of expectation traditionally given to members of cabinet—include specific instructions to engage professionally with members of the press. On that note, reporters were permitted to loiter in the third-floor hallway outside the Prime Minister’s Centre Block office this afternoon while cabinet met nearby, a laying-in-wait that was not permitted by the previous government, presumably, out of concern that ministers might come within shouting distance of a gallery member on the way into or out of a cabinet meeting. After a few hours around the table today, Trudeau’s ministers emerged to take questions from the horde and, shortly thereafter, the Prime Minister himself appeared across the street at the National Press Theatre, a few dozen hands shooting up when the moderator, a newspaper scribe, asked if anyone had a question.

There were many similar questions to ask of Trudeau last month when he made his morning-after appearance at the press theatre as prime-minister-to-be. But now, the issues at hand are all actually within Trudeau’s responsibility. Slowly but surely, the possibilities for complaint are taking shape.

There is, for instance, the sewage that Montreal is dumping into the St. Lawrence with the federal government’s permission. There is the science minister’s support for a questionable theory about multiple sclerosis. And the veterans affairs minister actually isn’t sure about reopening that office in Sydney, N.S. It turns out that the budget was already going to be in deficit, and Bombardier would like a billion dollars. The victims of communism memorial needs to go somewhere, and the CF-18s still have to be recalled from Iraq. A national plan for reducing greenhouse gas emissions needs to be articulated, and the deadline for getting 25,000 Syrian refugees to Canada is now six weeks away.

Oh, and what about those top-secret orders-in-council that the previous government signed? Have you looked at those? What can you tell us about those secrets?

Trudeau, suggesting he had yet to look, stepped over this matter with a vague commitment to appropriately balance openness and necessary security.

Otherwise, he did not present a plan for the Syrian refugees, but at least acknowledged his party’s commitment to resettle 25,000 “government-sponsored” refugees; on the European Union’s move to label products manufactured by Israeli settlement in the occupied territories, he expressed concern with any initiative that would single out Israel; he offered no timeline yet for withdrawing the CF-18s, nor for restoring diplomatic relations with Iran; and, without endorsing the deal, he looked forward to a full debate of the text of the Trans-Pacific Partnership trade agreement.

He does not directly address reporters in response to questions, playing instead to the cameras at the back of the room. His responses are not free of platitudes, but perhaps doing politics differently is not to be confused with not doing politics. The session lasted barely more than 15 minutes—Trudeau stopping before he left to take one shouted question about the RCMP’s interest in tailing a journalist—but, in that time, he at least set down a couple of potentially interesting markers.

On climate change, he announced a meeting with the premiers on Nov. 23 that will include a briefing by “top climate scientists,” which might at least impose some science on both the debate and whatever measure of action Trudeau subsequently commits the country to.

Second, on Bombardier, the Prime Minister offered some parameters for what his government will do about the manufacturer. “It will be based on economic reasons,” he said. “It’s always tempting to make political decisions that are based on symbols, but we will base our decision on economic facts and from the perspective of the benefits for Canadians.”

So that could make for a fun discussion whenever the new government decides whether or not to bail out the aerospace giant.

We are, of course, just eight days into the actual existence of this government. Ministers are still getting to know their drivers and their responsibilities and there aren’t enough people yet in the PMO to keep the lights on. That first day was lovely and it has been a decent first week. Nice things have been said and good moves have been made—the long-form census is back and the nation’s leading expert in rock snot is now totally available for interviews, and loitering on the third floor is allowed—and the art at the Pearson building has been changed and the public service is delighted and hugs have been comparatively plentiful. But the fun has only just begun. Indeed, you can hear the cacophony approaching.