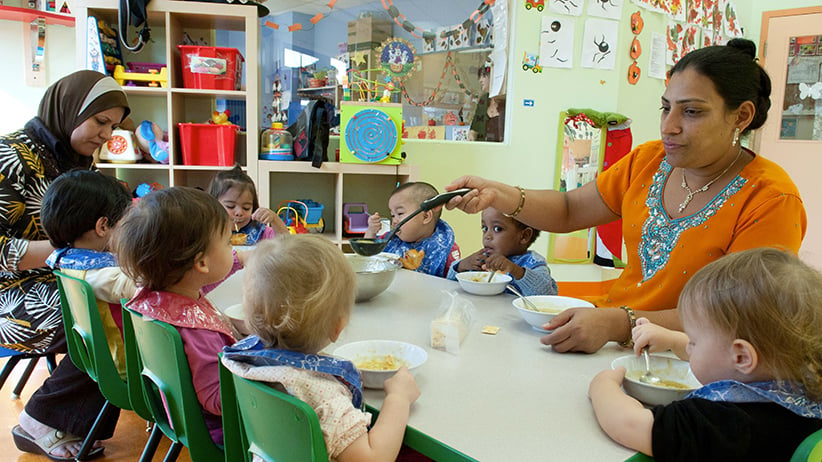 Just about any aspect of government policy on early childhood can spark a nasty debate. Advocates of publicly subsidized, licensed care centres for all preschoolers square off against those who favour stay-at-home parenting or less formal care options. Believers in the virtues of not-for-profit care feud with for-profit daycare companies. Fervent admirers of Quebec’s $7-a-day system clash with those who say the province’s groundbreaking experiment in affordable care hasn’t yet produced measurable educational benefits for kids.

(Here is a look at how European research informs the debate over for-profit care. Here is one of the studies of Quebec system’s impact on the economy and kids’ readiness for school. Or, if you don’t want to read the original study. And here’s a 2011 story  on how that Quebec study fits in the context of the federal policy debate.)

But there’s one thing about early childhood policy that isn’t open to dispute: It provides great backdrops for political events. So it was Tuesday when NDP Leader Thomas Mulcair stood in the sun-dappled playground of an Ottawa daycare centre—cute kids digging in the sand and pedalling their tricycles behind him—to announce his party’s plan. Should the NDP win next fall’s election, it promises to partly fund 370,000 child care spaces across Canada by 2018-19 at a cost of nearly $1.9 billion a year.

Mulcair proposes that Ottawa cover 60 per cent of new government spending, and the provinces 40 per cent, with parents paying no more than $15 a day for a child care space. “We’ll do it with provinces and territories,” Mulcair said. “And, no, we’re not going to dictate centrally that there’s only going to be one model.” That pledge not to try to replicate Quebec’s system across Canada is key, since Mulcair’s affinity for his home province’s policy, as a former Quebec Liberal cabinet minister, is no secret.

He even brought Quebec economist Pierre Fortin to Ottawa for the NDP announcement, to make the case that Quebec’s model is a winner for the provincial treasury. Fortin says it allowed 70,000 mothers to join Quebec’s workforce, generating $1.75 in economic activity for every dollar the province spends on daycare.

Still, Mulcair stressed that, as prime minister, he would respect other provinces’ preferences. Even though the NDP favours not-for-profit care, for instance, for-profit centres wouldn’t be excluded from funding. Furthermore, giving low-income parents priority access to the new spaces—a controversial idea among advocates of a universal system—might be allowed. “That’s exactly the type of thing that provinces should be looking at, based on their own reality,” he said.

Kevin Milligan, a professor at the University of British Columbia’s Vancouver School of Economics who has studied child care policy, said Mulcair is right to leave the design of daycare programs largely to the provinces. “I’d struggle to say why the federal government ought to be deciding what child care looks like in my Vancouver neighbourhood,” he said. (Read more from Milligan on what we can learn from Quebec’s child care experience, here.)

But if one of the main goals of the NDP policy is to encourage mothers of preschool children to enter the workforce, Milligan said the easiest way to accomplish that would be to effectively lower the cost of daycare by boosting the existing $7,000 maximum federal tax deduction for child care expenses. “That $7,000 hasn’t been adjusted since 1998,” Milligan pointed out, “so inflation has eroded it considerably.”

The Conservative government, however, seems less interested in enriching that deduction than touting its Universal Child Care Benefit, which pays $100 per month for every child under age six. Mulcair said he wouldn’t tamper with that signature Stephen Harper policy, even though it is often criticized by early-childhood experts for not directly funding new daycare spaces. No politician can ignore the fact that the $100-a-month benefit goes to all families with young children—including the 45 per cent of parents of preschoolers who, according to Statistics Canada figures from 2011, don’t use any form of child care, other than a stay-at-home parent. Among the 55 per cent who rely on child care, 61 per cent used licensed home daycare or daycare centres, 27 per cent private care by nannies or relatives, and the rest a mix of other arrangements.

(For a refresher on how the Conservatives, even before they won power, pitched their direct payments to parents as the antidote to Dryden’s national strategy, here’s a 2005 Maclean’s story. And for those numbers on how preschoolers are cared for, here is the Statistics Canada table.)

If Tory and NDP preferences are now on the table, the policy of Justin Trudeau’s Liberals is less clear. Back in 2005, former Liberal cabinet minister Ken Dryden spearheaded a national child care strategy, cutting separate deals with each province. Harper cancelled them after winning the 2006 election. Liberal MP Rodger Cuzner, Trudeau’s critic for employment and social development, said the party will propose a new strategy, but won’t try to estimate the cost of creating new daycare spaces before negotiating again with the provinces. “Inevitably, we’re going to have to work with the provinces in the delivery of a national program,” Cuzner said.

Trudeau’s reluctance to cost out a detailed proposal could leave Mulcair an opening to position his NDP as the voice of true conviction on early-childhood policy. And Harper, as always, will be hoping that means advantageous vote-splitting on the left.