In praise of ice buckets, 'aha' moments and unsung heroes 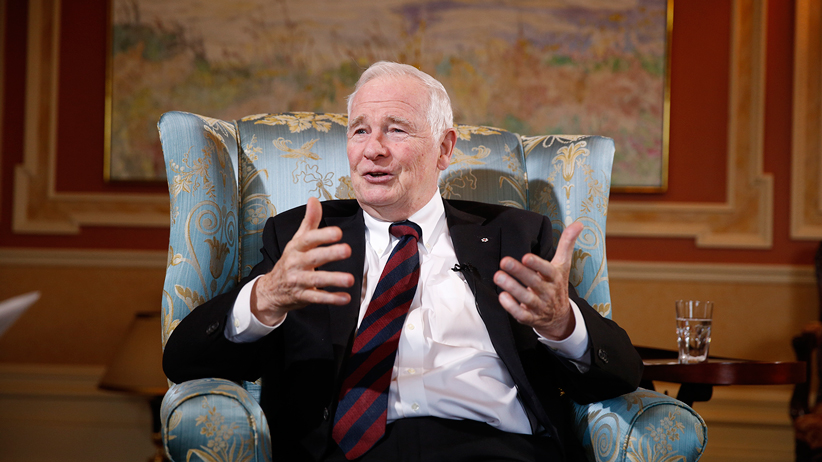 David Johnston is on a mission to create a more caring Canada. Maclean’s year-end interview with the Governor General covered a lot of ground — but it began with a conversation about giving. Johnston talked about the My Giving Moment campaign and his social-media challenge to the nation: “#Dare2Give.” He also spoke about ice buckets, “aha” moments and unsung heroes:

Q. You have dared Canadians to discover their “giving moment.” Can you describe what that instant would look like?

Well for many it would not be an “aha!” because they do it virtually every day. We want all Canadians who are in the custom of giving, volunteering their time, to capture that moment and say, “Hmm, this was special for me and the person who received the gift,” and then say, “Hmm, I’m going to dare one of my friends, colleagues, peers, etc. to do the same” so that that person has the same satisfaction of helping another. We hope this will ripple right across the country.

Q. Since we’re talking about charity and hashtags and challenges, we have to acknowledge the ice bucket in the room. I know you did the ice-bucket challenge —

The ALS campaign has raised millions of dollars.

Q. There are some people who have said that ice buckets and the moustaches are clever gimmicks but they’re not good reasons to donate.

One looks for a wide spectrum of rationale and encouragement for giving. With respect to the ice-bucket challenge, it’s a dare, it’s something different, it’s something edgy, and it permits one to encourage someone else to duplicate it. That’s always attractive. Our idea with our campaign was to try to ensure that giving of time, talent or treasure — old or young, rich or poor — became part of the culture of Canadians, became part of our DNA. I think it’s already there, but [we want] to emphasize it, to reinforce it, to extend it.

Q.The ice-bucket challenge, along with these public dares, have turned quiet gestures into public demonstrations — almost turning philanthropy into something that’s more about the giver. Do you think motivation matters?

Motivation matters enormously, and I think it also varies enormously. The wonderful book The Magnificent Obsession, written 50, 60 years ago was about that—the magnificence was someone giving in an extraordinary, generous way. The obsession was that it had to be done totally anonymously and privately. And that’s fine if that’s a person’s disposition to give quietly; we laud and applaud that.

I think we want to use all the opportunities we have to help people understand that there is a joy in giving that is very personal, but it’s also very uplifting for the community, and to extend that sense of satisfaction, participation, help to others, as a way of building healthy communities.

Christmas Seals was started by the Canadian Lung Association almost 100 years ago when tuberculosis was such a scourge and we needed funds for research and care. The Daffodil Campaign began with respect to cancer 80 or 90 years ago. March of Dimes, 80 or 90 years ago, dealing with polio. Those three were the beginning of mass-appeal campaigns.

I think the issue of why people give is something that’s an ongoing science and art. We’re told by some that the act of giving releases very beneficial and delightful chemicals in the brain that encourage giving. Well, if that means it is in the nature of human beings to give, I’m all for that.

Q. You’re on a mission to make Canada a more giving nation. What is in the way?

Partly indifference and partly complacency. We are a lucky people in this great country of ours. I often say Canada is a solution in search of a problem. When you look at countries around the world, are there any countries that enjoy the healthiness of our communities, the equality of opportunity? If there are, they’re rare, and we can take that for granted. I often say that the veneer of civilization is very thin, that you have to constantly reinforce it, polish it, avoid corrosion, avoid attacks on it.

Hugh MacLennan in his last book, great book, Voices in Time, was writing about the end of civilization. Reflecting on how you rebuild a civilization, one of his heroes in his book said, “Civilization is like a garden that is cultivated on the edge of a jungle, and if you don’t cultivate it constantly, the jungle creeps in and takes over.” I think that’s true of the civilized life we lead, and I think our greatest enemy is taking that for granted and failing to recognize that we should work every day at building it up — of keeping that garden away, and be always conscious of those people in our civilization, our society, who have perhaps not had the same good fortune that we have had and extend a hand to them to help them up. 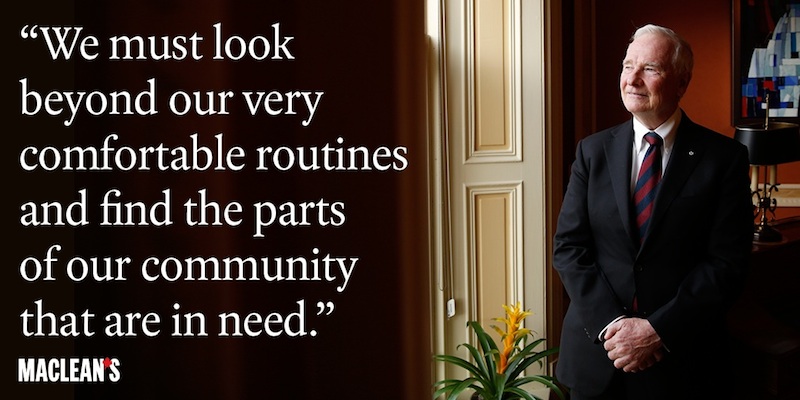 Q. You’ve talked about the time you spent at McGill in Montreal and living there for quite some time before even being made aware of people in need in the city. In some ways the challenge is not getting people to give, it’s getting them to see.

I think that’s such an astute observation. My wife and I are very focused on mental health and two aspects of mental health. One is to overcome the stigma, to bring mental health out from the shadows into the open and realize it’s an illness like any other illness.

In Montreal I had one of those “aha moments” or “wow moments,” but in a negative sense. I thought I knew my city, my community, pretty well, and we’d been there for probably 13 or 14 years before I co-chaired the Centraide, or United Way, campaign for one year.

I learned for the first time that one out of four boys entering school for the first time in all of east-end Montreal was unable to learn. They came from backgrounds where they simply couldn’t sit down and start learning ABC. One out of four—that opened my eyes to parts of the city that I’d not seen in my very comfortable position at McGill teaching very bright students, dealing with very, very enlightened and engaged people. It caused me to realize that we must look beyond our very comfortable routines and find the parts of our community that are in need.

Q. There are people who volunteer tirelessly in our communities. They show up week after week and not for a tax receipt. Do you think we do enough for those people?

Never. These are the heroes, the unsung heroes of our community and so often the glue that holds families together, holds neighbourhoods together, that find those areas that are not as obvious that those of us on our mainstream don’t see. What do we do about it? Well, I think we applaud them whenever we can.

Here at Rideau Hall, we’ve reinvigorated the Caring Canadian award started by [former governor general] Roméo LeBlanc more than 20 years ago to recognize the unsung heroes in the community, the people who will not be headlines in the newspaper but they’ve been doing Meals on Wheels for 30 years faithfully, they’ve been watering the local rink for 25 years out there, cold night after cold night, never asking anything more than the satisfaction of knowing more kids will skate the next day.

Our challenge is how do you transfer that sense of a) responsibility and b) joy to a younger generation. I’m so excited about some of the initiatives that Craig and Marc Kielburger have — the “We Days,” for example. I think those are wonderful, dare-to-give catching moments.

Q. There’s a little bit of suspicion of people who are doing good — a cynicism.

The critical mind is an important feature of who we are. As one is looking at those phenomena of why an individual gives, it’s very appropriate to say, “What motivates that?” and where one sees that as very beneficial, say “How do you replicate it?” I suppose one could argue from a psychological point of view that all giving is selfish because you only do it because it brings you some kind of satisfaction. I go the next step and say: give me more of that kind of satisfaction and that kind of selfishness and together we’ll build a pretty attractive world.

For the complete interview with Governor David Johnston tap here.