Harper and pensions: the choices you make

“There are tough, important choices that must be made,” Stephen Harper wrote to his caucus 16 days ago. All righty then. Let’s talk about choices and Old Age Security. One thing I’m going to resist doing is handing out white hats and black hats. There are fewer heroes and villains in this story than, well, choices.

Here (.pdf) is the Ninth Actuarial Report on the Old Age Security Program As At 31 December 2009, tabled before Parliament three months ago. The government says it took a look at that report and had a fright. “Demographic changes will have a major impact on the ratio of workers to retirees,” it says, with the result that “Total annual expenditures are projected to increase… from $36.5 billion in 2010 to… $108 billion by 2030.”

Out went the talking points. The cost of the program will triple! Something must be done! They were more reticent about the next paragraph, which says cost of the program as a fraction of GDP is projected to rise from 2.3% in 2010 to 3.1% in 2030, before declining after that. So 2030 will indeed be a high-water mark in the entire history of the OAS program’s cost, but it’s not really a tripling because everything, including our ability to pay, will have increased in the meantime.

Still, big bump up. Point taken. But then there’s this. Here’s (.pdf) the Second Actuarial Report on the Old Age Security Program As At 31 December 1991, tabled in Parliament on Feb. 7, 1994 — about the time a 34-year-old rookie Reform MP named Stephen Harper would have been getting used to his new job. That report said the total annual cost of OAS would grow from $34 billion in 2010 (it’s in the chart on page 4) to $119 billion in 2030. An even bigger increase than the one projected by the most recent report, but pretty much the same scale. And indeed, on Page 3, that actuary 19 years ago picked 2030 as the peak date for the cost of the OAS program.

Demographics doesn’t change radically from year to year. So anyone reading the 2nd, 3rd, 4th, 5th, 6th, 7th or 8th Actuarial Reports on the Old Age Security Program would have seen the same trend lines that the government says spurred it to action now. Never mind last May’s election — this could have been an issue in any of the last six federal elections. (As we’ll see, and as many of you already know, it sort of was, once early on.) There quite literally could not possibly have been more warning.

So that’s one thing.

Then there’s this. Here’s Chart 2 from Page 21 of the most recent report. 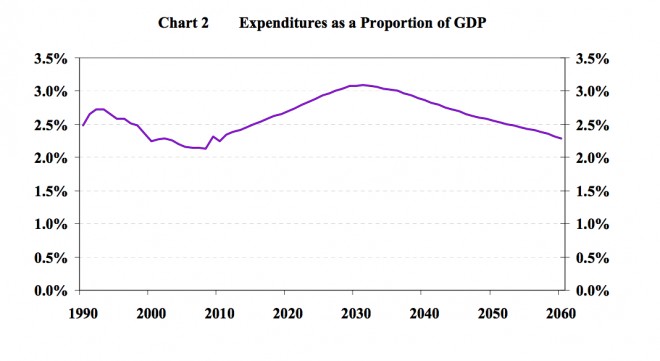 What it tells us (Table 9 is more precise but less pretty to look at) is that the most expensive year to run OAS since the program was founded was 1993 — the year Stephen Harper was elected to Parliament. Not a surprise. We were barely out of the early-90s recession. Unemployment was stubbornly way higher than today. Even with the famous demographic changes underway, we won’t see OAS put a heavier load on the fisc until 2020.

So Harper should have put $9.4 billion aside for a rainy day? No, because that money was gone. It paid for a bunch of things the Liberals did along the way, and then helped pay for Conservative policies like cheques for parents of small children, tool-belt tax credits and 2 points of GST cuts. After things turned nasty at the end of 2008, still more money went into infrastructure projects all over the place.

So to be in a position to afford OAS in 18 years, you can make OAS less expensive; or you can take money away from places it’s already being spent; or you can raise taxes. Politicians will call one another names for making different choices. I get to point out, for instance, when the Liberal MP Judy Sgro says the government wants to “pickpocket seniors” by eventually making it harder to get OAS, that Sgro’s man for the Liberal leadership was Paul Martin and that Martin nearly resigned from cabinet when Jean Chrétien blocked his own plan to make comparable changes to the same program for the same reasons in 1995.

As for Harper and some colleagues, they have consistently made their own choices clear. In Davos, Harper said, “Fortunately, the centerpiece of [the pension] system, the Canada Pension Plan, is fully funded, actuarially sound and does not need to be changed.” It is to laugh. The CPP became fully funded after Paul Martin and his provincial colleagues, including the Alberta Conservative Jim Dinning, agreed to substantially increase CPP premiums over several years. The Canadian Alliance and its finance critic Jason Kenney fought those increases, long after the decision was made, tooth and freaking nail.

So the Harper Conservatives’ choices are clear and consistent: resist paying more into a program when you can take something out of the program instead. They should explain why they would do the taking-out now, in the absence of a crisis or even of new information. Their opponents should explain what they would cut or tax to afford the extra billions they would need for OAS.