John Geddes on the politics behind the family tax platform 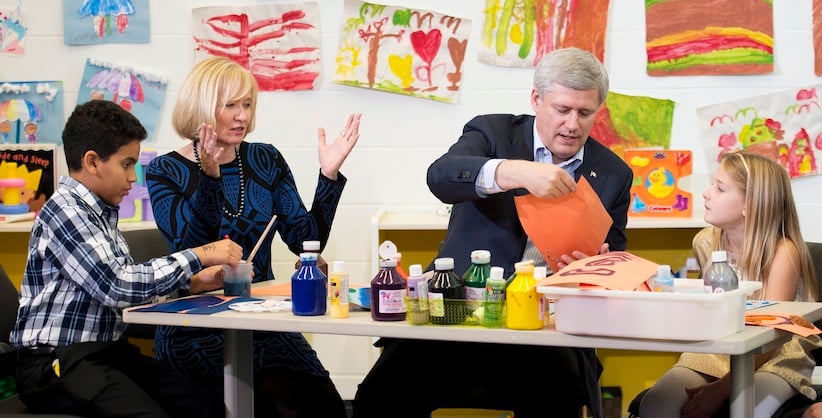 Back in the 2011 election race, I was following Stephen Harper on the campaign trail near Victoria when he announced his “Family Tax Cut” income-splitting promise in a middle-class family’s backyard. “We will make it easier for parents to cover the day-to-day cost of raising their kids,” Harper declared that day.

At the time it struck me as pretty smart politics: let parents divide their income for tax purposes. As the Tories said, treat them like a unit—a family—rather than mere roommates. The immediate response from his opponents was less about the measure itself, than about the timing and context. The NDP’s Jack Layton took aim at Harper for saying tax-splitting would only be allowed after the federal budget was balanced, in five or six years, and suggested families couldn’t wait so long for a break. The Liberals’ Michael Ignatieff faulted Harper for giving corporations tax breaks immediately, but parents a cut only “maybe in five years.”

Those quick-reaction campaign complaints weren’t really focusing on what sorts of families would benefit most from this sort of tax break—i.e., rich ones with a big disparity between what mom and dad make. But the major tax-trimming package Harper announced today in Vaughan, Ont., north of Toronto—a suite of cuts that includes making good on the 2011 income-splitting pledge—is a shrewder, more complex mix delivered in an entirely changed context.

Several credible studies after the 2011 election faulted income-splitting as an idea that would overwhelmingly benefit well-off couples—a point that the late Jim Flaherty, Harper’s long-time finance minister, publicly said he found persuasive. As well, remember that the 2011 election was on May 2, fully five months before the Occupy movement got rolling, forcing income inequality onto the global policy agenda. Then Liberal Leader Justin Trudeau picked up the issue last year, and early this year made it perhaps his signature policy concern (he gets into it here in an interview with Paul Wells).

So Harper had to be careful today. He couldn’t announce a plan that was all about giving a generous tax reduction mainly to couples made up of a high-earning dad and a lower-earning, or stay-at-home, mom. Here are the main elements of his multi-faceted announcement, which he delivered in what we must (it’s rule of reporting) call a campaign-style event, sharing the stage with likeable moms and dads and kids:

Taken together, these measures allowed Harper to declare that every family with kids—some four million households—would save on their tax bill. Particularly notable is that enriched deduction for daycare costs. After all, critics had argued that the income-splitting plan was a thinly disguised sop to social conservatives who would like the tax code to nudge more families back to a traditional mom-home-with-the-kids model. But this is a tax-cutting nod in quite another direction, which is fascinating so soon after the NDP’s Thomas Mulcair announced his own plan to make creating new daycare spaces a pillar of his 2015 platform.

There will be a lot more number-crunching to come on these proposals. But even before economists wade in on the details, the broad outlines of today’s announcement leave no doubt that Harper and his strategists are adjusting to a climate of heightened sensitivity about income disparities, and taking seriously the political consequence of charges that they like one sort of family more than others.

In short, compared to the more straightforward, but demonstrably less fair, income-splitting proposed he unveiled in that B.C. backyard in 2011, Harper has assembled a hybrid policy that will be far more difficult for his opponents and critics to demolish.