Has Trudeau reached a tipping point? A new poll shows his support slipping.

An Abacus Data survey finds the PM's popularity and Liberal support dipping, with the blame falling squarely on the disastrous trip to India 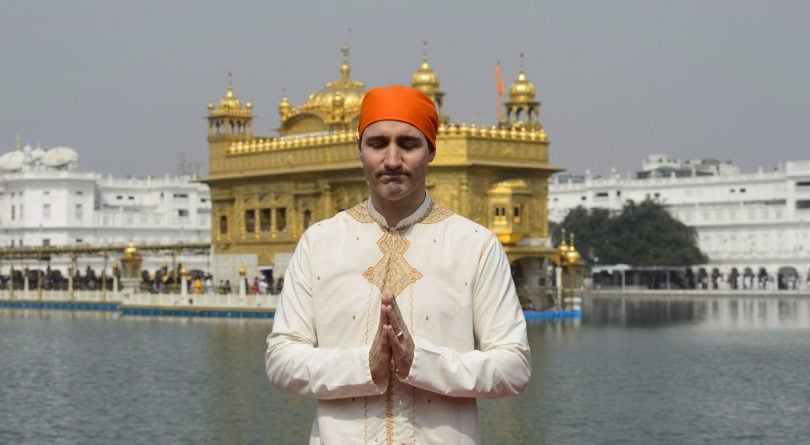 Justin Trudeau returned from India with some new investment agreements, an embarrassing diplomatic incident to sort out, and according to a new poll, less support from voters.

In the latest edition of Abacus Data’s regular survey, 36 per cent of committed voters said they’d mark the box beside by their local Liberal candidate if e-day were tomorrow, down three percentage points from January. And the prime minister’s personal popularity has fallen even further, with his positive and negative ratings within the margin of error for the first time since the 2015 election that swept him into office.

Abacaus CEO David Coletto says this marks a turn for Trudeau, who has been the Liberals’ strongest asset for two-and-a-half years. “He’s been almost, in a way, Teflon,” Coletto said. “Many events that pundits have said would bring him down hadn’t hurt him.”

What does appear to have scuffed Trudeau’s image in Canada is the recent visit to India. While there, he met with several prominent industrialists and announced $250 million in new investments by Indian companies in Canada. But the trip drew negative attention due to the presence of convicted would-be assassin Jaspal Atwal at an official event, the enthusiastically local outfits of the prime minister and his family, and the impression that Indian leaders were not extending a particularly warm welcome.

The perception that Trudeau was being a good ambassador for Canada on the world stage was previously “one of his strongest points,” said Coletto, noting that even some of those who didn’t vote for him said he was doing a good job of foreign affairs.

But Abacus’ data suggests it’s the India expedition, and not say the recently released federal budget, which has respondents questioning Trudeau. The set of those who said his international representation of Canada was “poor” jumped from 21 per cent in October 2017 to 37 per cent in today’s poll. The assessment of the prime minister’s efforts on the economy, debt and deficits, and the use of taxpayers’ money,  by contrast, remained largely unchanged.

It’s results put the Conservatives three points behind the ruling Liberals, following a trend in which a number of polling firms have the Tories drawing close to or ahead of their main opponents.

Coletto says the Liberals losses are self-inflicted. “The more competitive race is not because people woke up over the last few days [that] we were polling them and said, ‘I love Andrew Scheer and I’m going to vote Conservative,’” he said, pointing to the largely unchanged numbers of the Tory leader and the NDP’s Jagmeet Singh, whose party was at 18 per cent support. A large number of respondents still express no positive or negative opinion of either leader.

The Liberals have lost ground in most of the more populous provinces, barring Quebec. But Coletto says the bigger concern for the party is not where their support is dropping, but among whom.

“One assumption would be that the turn in the prime minister’s numbers were Conservatives and right-wingers getting more mad than they already were,” he said. But the Liberals lost ground among those who had previously voted for them as well as the NDP, and in the partly-overlapping set of those who put themselves on the left of the political spectrum.