Here's something all the premiers can finally agree on: Ottawa should give them more money

Politics Insider for Dec. 3: Premiers agreed they'd all like more federal money, Trudeau plane mishap and some Alberta conservatives are done with Scheer 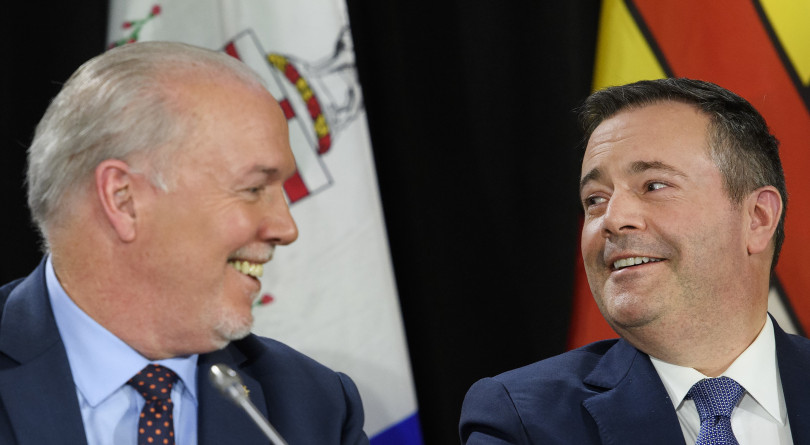 John Horgan, left, Premier of British Columbia and Jason Kenney, Premier of Alberta look at each other during press conference after a meeting of the Council of the Federation, which comprises all 13 provincial and territorial leaders, in Mississauga, Ont., on Monday, Dec. 2, 2019. (Nathan Denette/CP)

Moe money: Canada’s premiers have been lobbing insults and criticism at each other for weeks, but when the provincial and territorial leaders got together for a few hours in Toronto on Monday, they found they all agreed that one thing is needed: more money from Ottawa. During the meeting, hosted by Ontario Premier Doug Ford and chaired by Saskatchewan’s Scott Moe, the premiers all agreed that the new federal money should come in two forms.  First, health care transfers to the provinces need to grow by 5.2 per cent annually, up from the current three per cent. Secondly, the group called on Ottawa to scrap the existing cap on fiscal stabilization payments to hard hit resource provinces. Despite the best efforts of reporters to draw the premiers into talking about dicey and divisive topics likes Quebec’s Bill 21 and pipelines, they rigidly stuck to their talking points of unity, collaboration and cooperation. The question is whether they can maintain their various truces until the premiers meet with Justin Trudeau as a group in the new year.

The further aeronautical adventures of Justin Trudeau: What is it with Trudeau and his planes? Ground crew towing the prime minister’s plane somehow let it roll into a hangar, seriously damaging the plane’s nose and an engine cowling. The accident will take the plane out of commission until next August for repairs.  Recall, during the election a media bus drove into the wing of the Liberal campaign plane. Well, one of them.

What room can Andrew Scheer win, if not this one?: Andrew Scheer doesn’t care “what the talking heads, the naysayers and the people who make their money by stirring up division in our party have to say.” That was the message he took to Calgary last Friday for the United Conservative Party’s annual meeting. But after Scheer left, Jason Markusoff stuck around to hear what some Alberta conservatives had to say, and he found an awful lot of them want a new leader, while those that don’t mostly just want to avoid another messy leadership race:

“We need to win in Ontario, so maybe that means we need a leader from Ontario,” says Martin Norman, a convention-goer from Edmonton. It’s striking, that in this moment when right-leaning Albertans are so frustrated that Confederation isn’t providing them what they want in the West—respect, pipelines, resource-friendly legislation—that they’d be particularly attuned to what Ontarians might want when it comes to Conservative leadership. But they know they can’t really run up the seat total in the Prairies much more than they did, so victory means caring what Brampton and Kitchener want.

Alberta Tories have, in Kenney, a leader that excites them. Similarly to Stephen Harper, charisma is not a part of Scheer’s brand. But at least with Harper, Conservatives grew enamoured by his toughness. Many want to feel something like that again.

“I door-knocked in seven ridings in three different (western) provinces, and there wasn’t a single door that I knocked on where I found  someone who wanted to vote for Andrew Scheer,” says Jordan Katz, a Calgary activist who was a 2004 CPC candidate Ontario. There are groups of Scheer skeptics and supporters throughout Alberta, just as in the rest of Canada, he says. Read more ››

Jason Kenney’s Facebook-era McCarthyism: Alberta’s economy is in turmoil, and Kenney’s cabinet spends its time waging a war against those who were allegedly disloyal to Alberta’s oil and gas sector, writes Chris Turner:

Less than a year into his mandate, Kenney appears to be adopting the approach to political opponents practiced by the late Republican Senator Joe McCarthy in his hunt for un-American activities—guilt by association, loyalty tests, party affiliation as a permanent stain, the hyperbolic conflation of any and all criticism of the government with an outrageous offence verging on treason. In Kenney’s case, though, there’s a style and intent that seems less like the purging of a bureaucracy than the offhanded point-scoring and intellectual rigour found in the partisan corners of social media. Truth is irrelevant; the only thing that really matters is that your team knows who to boo and hiss in the next game. Let’s update it for the digital age and call it Facebook McCarthyism. Read more ››

Incidentally, this is shaping up to be a big week in the life of Canadian pipelines. On Sunday Enbridge announced the Canadian portion of the Line 3 replacement pipeline, which runs from Alberta to Minnesota, came online. Then on Monday Trans Mountain Corp., which is building the Trans Mountain expansion, announced it will lay the first piece of pipe in the project later this month.

The man who blew the whistle on uber rich tax cheats: The latest episode of Maclean’s podcast Power of One, which is devoted to the extraordinary lives of ordinary people who changed their worlds and ours, tells the story of Bradley Birkenfeld, a brash American who spent years working in Switzerland’s notoriously opaque banking system, which specialized in helping billionaires avoid paying taxes. Then one day he yanked back the curtain. Go here to listen to the episode “The World’s Biggest Whistleblower.”

Lay it on us: Help us better understand what you’d like from the Maclean’s Politics Insider newsletter. This short survey will only take a few minutes to complete. We really appreciate the feedback.